Before the 1990s, astronomers had discovered no planets in distant solar systems, and today we still know only a few thousand exoplanets orbiting the billions of stars in our Milky Way galaxy. Studies of exoplanets are still in their infancy. As astronomers aim earthly and space-based telescopes outward toward distant solar systems, what can they expect to find? A new statistical study analyzes exoplanets found by the technique of gravitational microlensing. It suggests that Neptune-mass worlds – those with about 20 times Earth’s mass – are likely the most common type of planet to form in planetary systems’ icy outer realms.

The study is the first to indicate the types of planets waiting to be found far from a host star, where scientists suspect planets form most efficiently. A paper detailing the findings was published in The Astrophysical Journal on December 13, 2016.

We’ve found the apparent sweet spot in the sizes of cold planets. Contrary to some theoretical predictions, we infer from current detections that the most numerous have masses similar to Neptune, and there doesn’t seem to be the expected increase in number at lower masses. 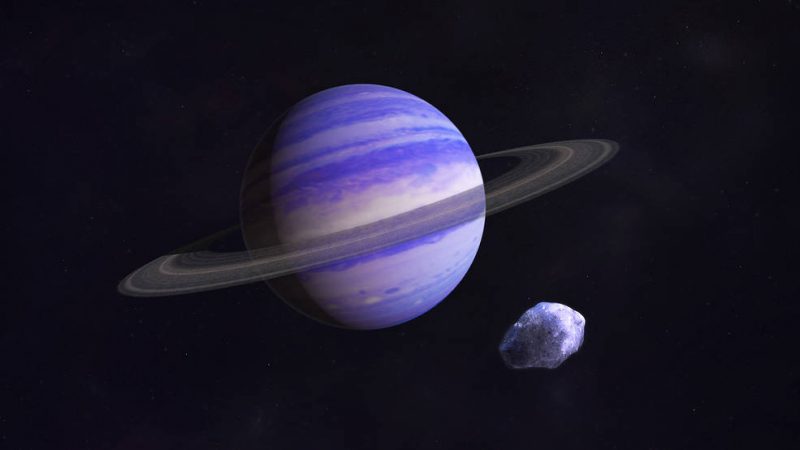 Artist’s concept of a Neptune-mass exoplanet (approximately 20 Earth-masses). Yes, such a world might have rings, as Neptune does. In the foreground, the artist depicts an icy body left over from the period of planet formation, drifting past the planet. Image via NASA Goddard/ Francis Reddy.

More than 50 exoplanets have been discovered using microlensing compared to thousands detected by other techniques.

To study these events in greater detail, Suzuki’s team included data from the other major microlensing project operating over the same period, the Optical Gravitational Lensing Experiment (OGLE) out of the University of Warsaw, as well as additional observations from other projects.

From this information, the researchers determined the frequency of planets compared to the mass ratio of the planet and star as well as the distances between them. These researchers said:

For a typical planet-hosting star with about 60 percent the sun’s mass, the typical microlensing planet is a world between 10 and 40 times Earth’s mass.

For comparison, Neptune in our own solar system has the equivalent mass of 17 Earths.

The results imply that cold Neptune-mass worlds are likely to be the most common types of planets beyond the so-called snow line, the point where water remained frozen during the formation of that system’s planets.

For comparison, in our solar system, the snow line is thought to have been located at about 2.7 times Earth’s mean distance from the sun, placing it in the middle of the main asteroid belt today.

Read more about this study from NASA. 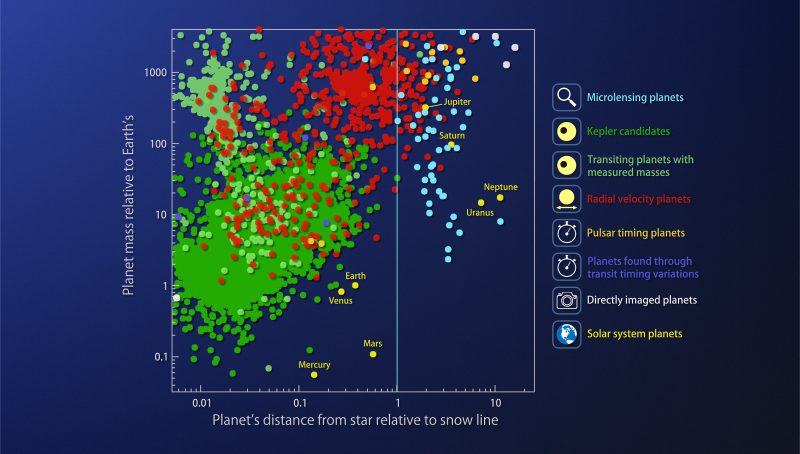 This graph plots 4,769 exoplanets and planet candidates according to their masses and relative distances from the snow line, the point where water and other materials freeze solid (vertical cyan line). To learn more about this image, watch the video above. Image via NASA Goddard.