Let NASA take you on a virtual trip to exoplanets

Exoplanets are worlds orbiting distant stars. Until recently, they existed only in the realm of imagination and probability. Now we know thousands! NASA’s Exoplanet Travel Bureau lets you explore them. 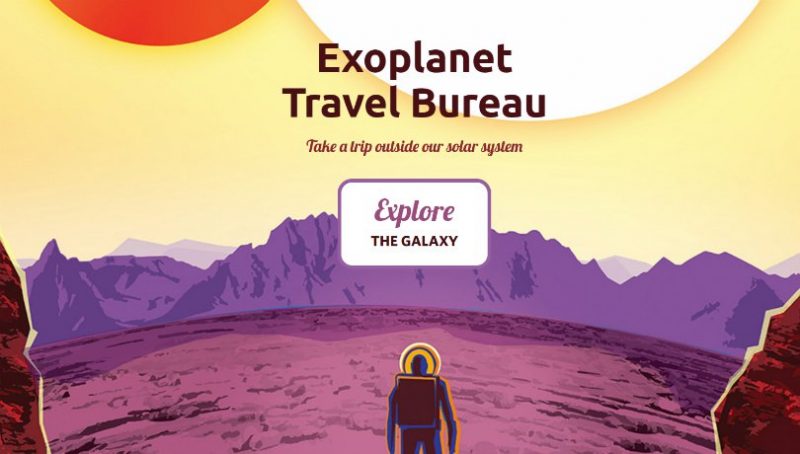 Screenshot of the Exoplanet Travel Bureau website. Image via NASA.

Many of us dream about being able to go into space and visit different planets in our solar system or even venture to more distant worlds around other stars. Exoplanets would be particularly exciting, since we haven’t seen any of them close up yet, but what we do know so far shows that there is a wide variety of exotic destinations out there. But now there is a way to go to them, at least virtually. NASA announced on May 24, 2018, that it has launched the Exoplanet Travel Bureau, where you can virtually tour the galaxy from the comfort of your home.

Being able to actually visit any of the many exoplanets discovered so far isn’t physically possible, not yet anyway, so the Exoplanet Travel Bureau may be the next best thing. Most of the planets found so far would not be hospitable for human visitors, just like the gas and ice giants or Venus in our own solar system, but others are thought to be more potentially habitable. 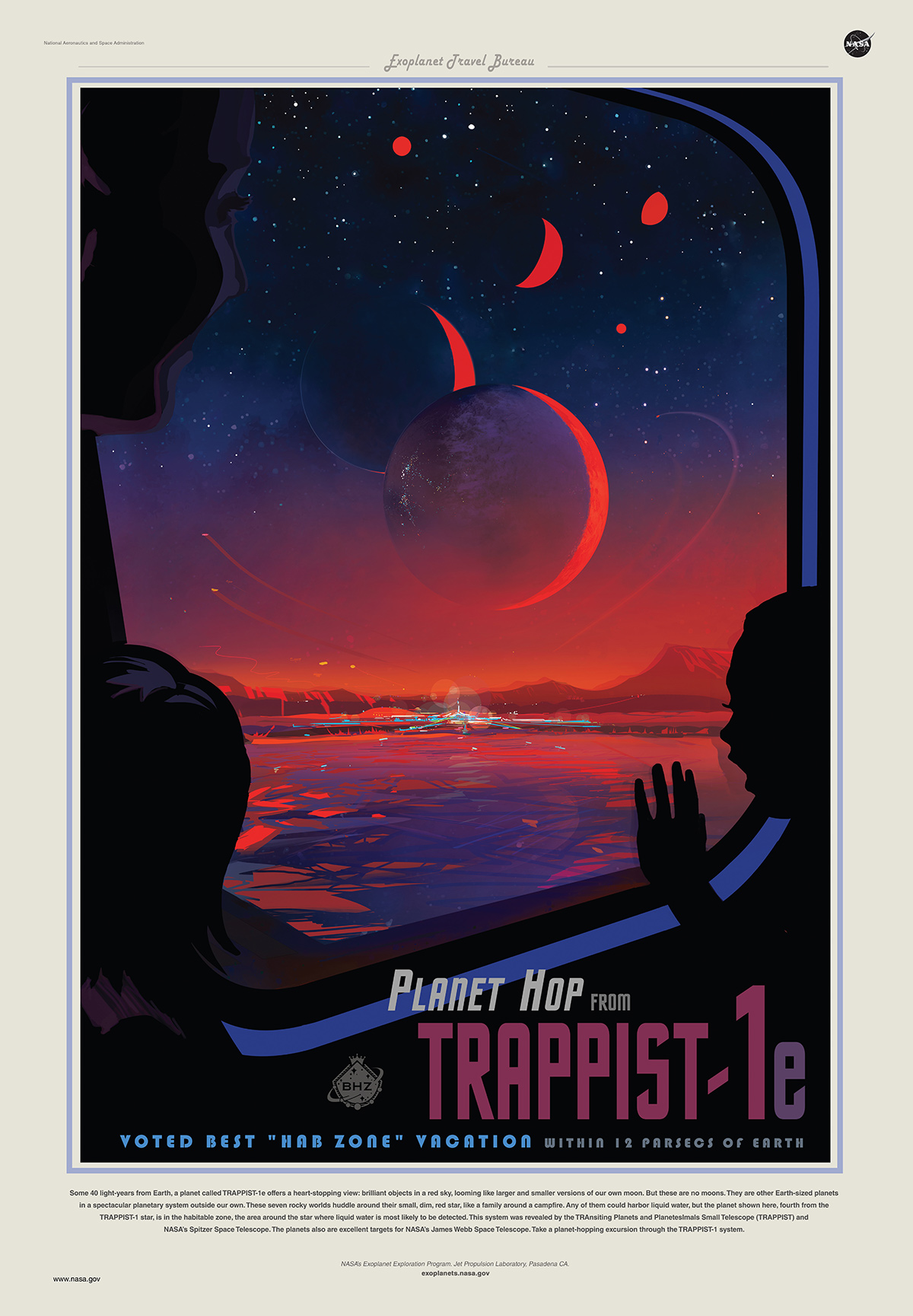 The travel poster for exoplanet TRAPPIST-1e. Image via NASA/JPL-Caltech. 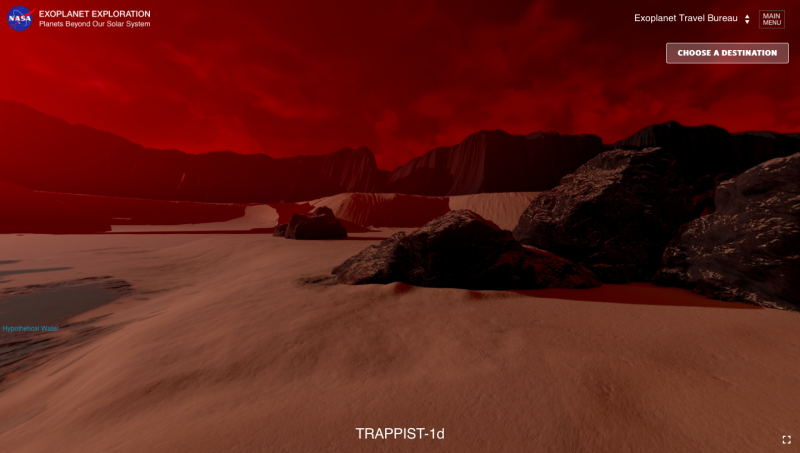 Screenshot of what the surface of TRAPPIST-1d could look like. Image via NASA/JPL-Caltech.

One such world is Kepler-186f, the first Earth-sized exoplanet discovered orbiting in the habitable zone of its star. The seven near-Earth-sized planets of the TRAPPIST-1 system also stand out, since they are fairly close to Earth at only 40 light-years, and at least some of them are thought likely to have liquid water on their surfaces. But even then, determining the actual conditions of any of these planets is not an easy task. As Martin Still, program scientist for NASA’s Transiting Exoplanet Survey Satellite (TESS), explained:

Because Kepler-186f and the majority of Kepler-discovered planets are so distant, it is currently impossible to detect their atmospheres – if they exist at all – or characterize their atmospheric properties. Consequently, we have limited knowledge about what these distant worlds are really like, but these surface visualizations allow us to imagine some of the possibilities.

And that’s where the Exoplanet Travel Bureau comes in. Based on data from the Kepler Space Telescope and other telescopes, researchers can visualize what some of these worlds might be like. Remember, these are just visualizations based on what we know so far about these planets, until more information becomes available. As Still noted:

Current and future NASA missions, including TESS and the James Webb Space Telescope, will find the nearest exoplanets to our solar system and characterize their atmospheres, bridging the gap between speculation and what’s really out there. 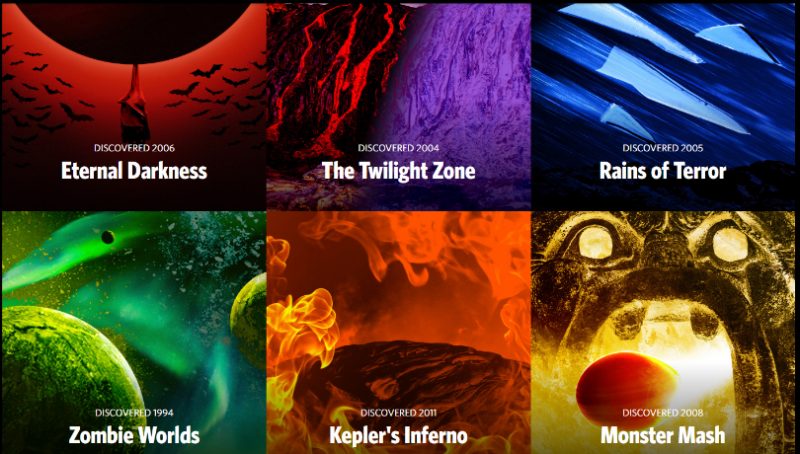 Elsewhere on the Exoplanet Exploration website, you can see information about six of the most “terrifying” exoplanets found so far. Image via NASA/JPL-Caltech.

On the website, you can choose your destination (currently six different options) where you can “explore a surface” to see a visualization of the surface of the planet in a 360-degree view, and also get a beautiful art poster of each one which can be downloaded, with more information about that planet.

The ETB is one part of NASA’s Exoplanet Exploration website (under the Explore tab), which contains much more information on the exoplanets discovered so far, and other resources. There is a Historic Timeline reviewing all of the major discovery milestones since the first exoplanets were discovered in 1992. Also in that section are such delights as Strange New Worlds, Universe of Monsters and Galaxy of Horrors.

Exoplanet research is now one of the most exciting venues of modern astronomy and space science. Not that long ago, it wasn’t even known if any planets existed outside of our solar system. Now we have discovered thousands, and astronomers estimate that there are billions of planets in our galaxy alone (and, of course, there are billions of galaxies). It staggers the imagination, and now thanks to NASA’s Exoplanet Travel Bureau, we can start to get an idea of what some of them may be like.