A very good 7-minute film, called Ambition. It’s not like any film about space exploration you’ve ever seen. The Rosetta comet mission lies at its heart.

Everything about the European Space Agency’s Rosetta mission – which, in August, caught up to Comet 67P/Churyumov–Gerasimenko and began moving in tandem with it – has been fantastic so far. For us space buffs, this mission has gone a long way toward fulfilling our fantasies about what might be accomplished in outer space. It’s caused us to remember why we got so excited about space exploration in the first place. And now – just weeks before Rosetta will send a lander to the surface of its comet – ESA and Platige Image have released a very good short film, called Ambition. It’s not a space documentary, or like any film about space exploration you’ve ever seen. It doesn’t focus so much on the mission itself – although the Rosetta mission does lie at the heart of the film – as on why we need to go into space.

The film features an apprentice magician and her master, talking about the making of solar systems.

I won’t tell you more; you should watch the film. It might touch your heart in ways you’ve forgotten, as the Rosetta mission itself has touched mine.

Tomek Baginski directed the film Ambition, which stars Aiden Gillen – who played Littlefinger in Game of Thrones – and Aisling Franciosi. Its producers shot Ambition on location in Iceland and produced it primarily in Poland. Its first public screening was October 24, 2014 during the British Film Institute’s celebration of Sci-Fi: Days of Fear and Wonder, at the Southbank, London.

By the way, Tim Reyes at UniverseToday.com has written a very good essay about the film Ambition, and what it means in the context of U.S. and European space efforts, and in the larger context of our striving to meet challenges in the world today. He also says you should watch the film. Because it’s about what it means to want to know what’s possible.

In the film Ambition, a young magician tries to build a solar system … but fails. 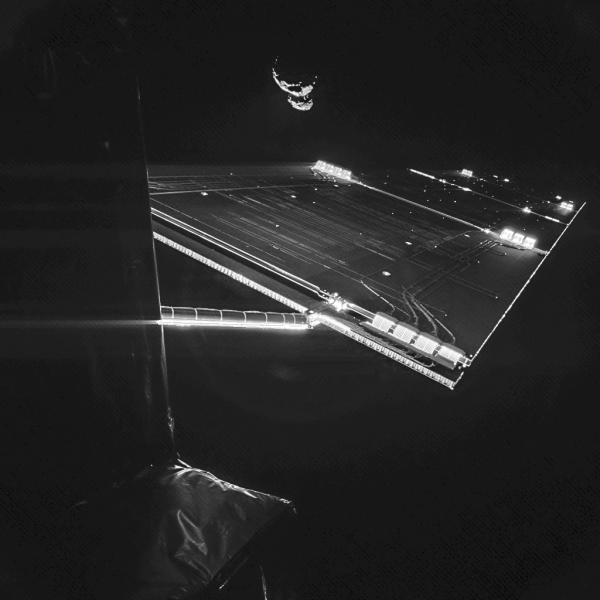 Did you assume this was an artist’s concept? It’s not. It’s a real image. It’s the Rosetta spacecraft’s selfie with comet 67P/Churyumov–Gerasimenko, imaged Sunday, September 7, 2014. Image via ESA/Rosetta/Philae/CIVA

Bottom line: A very good 7-minute film, called Ambition. It’s not like any film about space exploration you’ve ever seen. The Rosetta comet mission lies at its heart.