The Curiosity rover on Mars is exploring the base of Mount Sharp, within the Gale Crater. Did the crater hold a series of lakes? Did lake sediments create the mountain? 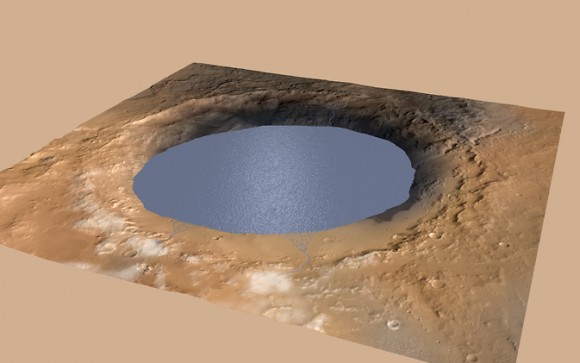 This illustration depicts a lake of water partially filling Mars’ Gale Crater, receiving runoff from snow melting on the crater’s northern rim. Evidence from NASA’s Curiosity rover suggests a mountain within this crater was built by lake sediments. Image via NASA/JPL-Caltech/ESA/DLR/FU Berlin/MSSS 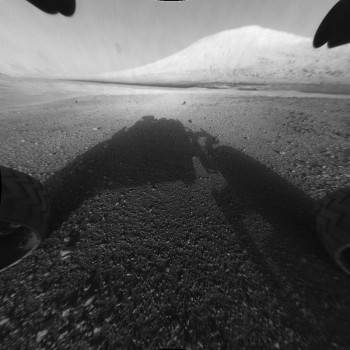 View larger. | Curiosity’s shadow on the floor of the Gale Crater in the foreground, Mount Sharp in the background. Read more about this image.

NASA said this week (December 8, 2014) that its Curiosity Rover on Mars has provided evidence that Mount Sharp – the central peak within the Gale Crater on Mars – was built over tens of millions of years via lake sediments. The idea is that Gale Crater – which is apparently an impact crater from a still-earlier meteorite collision – may once have held a lake. Indeed, if this line of reasoning is correct, Mars may once have had many long-lasting lakes.

Researchers have struggled with the question of why Mount Sharp – which looks like an enormous mound of sedimentary debris – sits in the Gale Crater. Mount Sharp stands about 3 miles (5 kilometers) tall. It lower flanks expose hundreds of rock layers. Curiosity is currently investigating the lowest sedimentary layers of Mount Sharp, specifically a section of rock 500 feet (150 meters) high dubbed the Murray formation. The rock layers – which appear to alternate between lake, river and wind deposits – may bear witness to the repeated filling and evaporation of a Martian lake much larger and longer-lasting than any previously examined close-up, NASA says.

According to this interpretation of Curiosity’s finds at Gale Crater, an ancient river may have carried sand and silt to this part of a lake, once held within the crater’s wall. Sediments deposited at the river’s mouth may have formed deltas similar to those found at river mouths on Earth.

This cycle may have occurred over and over again on Mars, not just at Gale Crater but in a similar way at many locations on the Red Planet. It may be a sign of long-lasting lakes on the Red Planet. Ashwin Vasavada, Curiosity deputy project scientist at NASA’s Jet Propulsion Laboratory in Pasadena said in NASA’s announcement:

If our hypothesis for Mount Sharp holds up, it challenges the notion that warm and wet conditions were transient, local, or only underground on Mars. A more radical explanation is that Mars’ ancient, thicker atmosphere raised temperatures above freezing globally, but so far we don’t know how the atmosphere did that.

Where there’s now a mountain, there may have once been a series of lakes … The great thing about a lake that occurs repeatedly, over and over, is that each time it comes back it is another experiment to tell you how the environment works.

As Curiosity climbs higher on Mount Sharp, we will have a series of experiments to show patterns in how the atmosphere and the water and the sediments interact. We may see how the chemistry changed in the lakes over time. This is a hypothesis supported by what we have observed so far, providing a framework for testing in the coming year. 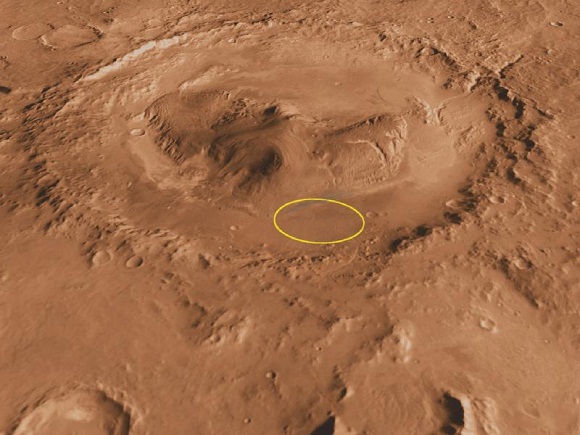 Bottom line: NASA’s Curiosity rover is now exploring the flanks of Mount Sharp, the central peak in the Gale Crater on Mars. Evidence from the rover suggests this mountain may have formed from lake sediments, over tens of millions of years.