Evidence for liquid water on the surface of Comet Wild-2

The first convincing evidence of liquid water on a comet comes from analysis of a sample of Comet Wild-2, returned to Earth by NASA’s Stardust space mission.

Scientists at University of Arizona have learned that Comet Wild-2 has minerals on its surface requiring liquid water for their formation. This first convincing evidence for liquid water on a comet comes from samples returned from Comet Wild-2 by NASA’s Stardust space mission. The discovery shatters the existing paradigm of comets as “dirty snowballs,” whose icy bulk never gets warm enough to melt.

Comets are typically thought of as frozen, rocky snowballs from the outer reaches of our solar system. While actual water was not found on Comet Wild-2, the Arizona scientists did find iron and copper sulfide minerals that must have formed in the presence of water.

Eve Berger is a U of A graduate student who led the study with her colleagues from the Johnson Space Center and the Naval Research Laboratory. She worked with Dante Lauretta, the principal investigator of the U of A team involved in analysis of samples returned by NASA’s Stardust mission. Dr. Lauretta explained in a press release:

When the ice melted on Wild-2, the resulting warm water dissolved minerals that were present at the time and precipitated the iron and copper sulfide minerals we observed in our study. The sulfide minerals formed between 50 and 200 degrees Celsius (122 and 392 degrees Fahrenheit), much warmer than the sub-zero temperatures predicted for the interior of a comet.

Not only did these scientists find evidence for liquid water, but they also were able to establish an upper temperature limit for the comet. They found a mineral that only exists below a certain temperature. Berger said:

The mineral we found – cubanite – is very rare in sample collections from space. It comes in two forms – the one we found only exists below 210 degrees Celsius (410 degrees Fahrenheit). This is exciting because it tells us those grains have not seen temperatures higher than that.

Cubanite also occurs on Earth and on some meteorites.

Having an upper and lower temperature limit on the comet allows scientists to start theorizing on the comet’s source of heat. In the press release, Berger mentions minor collisions or radioactive decay of elements as possible sources of heat.

These samples from Comet Wild-2 (pronounced “Vilt”) came from NASA’s Stardust mission. Stardust was launched in 1999 with the mission of gathering samples from Comet Wild-2 and returning those samples to Earth for analysis. In 2004, Stardust successfully scooped up particles surrounding the comet. It returned the samples to Earth in 2006. Scientists have been analyzing the data since that time. 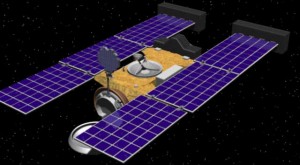 Comet Wild-2 was the “right snowball at the right time” for the Stardust mission. This comet was discovered in 1978 by astronomer Paul Wild. Comet Wild-2 had been in the outer reaches of the solar system, a Kuiper belt comet, until an encounter with the giant planet Jupiter in 1974 bumped it into an inner solar system orbit. As inner solar system comets orbit the sun volatile compounds burn off. We see this as the comet’s bright head, or coma, and tail. Scientists were able to collect samples from Comet Wild-2 after it had only gone around the sun five times in its new orbit.

Lauretta said he hopes that space missions like Stardust will continue. Without actually gathering the samples from the comet, he said, these discoveries would not have been possible.

The discovery is published in an online edition of the journal Geochimica et Cosmochimica Acta.

For information on the Stardust return mission visit here.