We’ve known for some time that Venus has vast lava plains, fields of small lava domes, and large shield volcanoes. But does it still have active volcanoes? A new study involving lava flows on Venus suggests that, yes, it does. 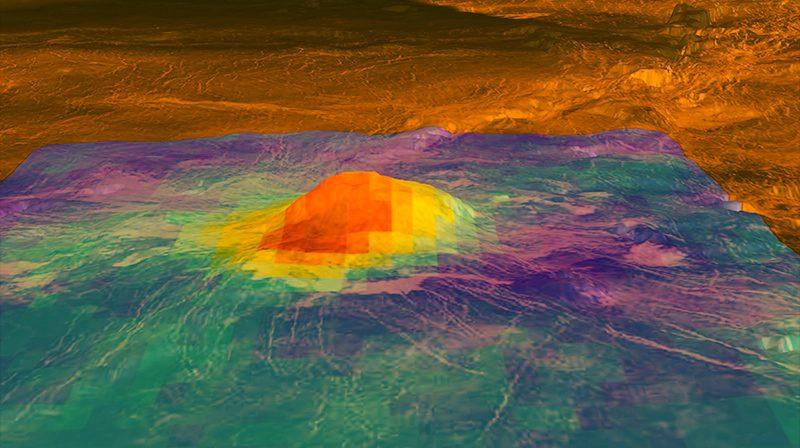 New research confirms that volcanoes might be erupting on Venus even now. This image shows Idunn Mons, a volcanic peak on Venus, long suspected of being active. The colored overlay shows heat patterns derived from surface brightness data collected via ESA’s Venus Express spacecraft from May 2006 to the end of 2007. Image via ESA/ NASA/ USRA.

Earth is one of several worlds in our solar system known to have active volcanoes. Now, a new study from Universities Space Research Association (USRA) confirms that – as has been conjectured before – cloud-covered Venus appears to be volcanically active as well.

It’s been known since the early 1990s that Venus has many volcanic features. NASA’s Magellan spacecraft found extensive lava flows beneath the perpetually cloudy atmosphere of Venus, but how old are they? That’s the unanswered question.

Thus, as yet, there’s still no smoking gun to prove that any Venus volcanoes are still active.

USRA announced its intriguing new findings on January 3, 2019. They come not from Venus, but from an earthly laboratory. The peer-reviewed paper was published the same day in Science Advances.

The new evidence stems from spacecraft data on lava flows on the surface of Venus, some of which, the researchers now estimate, may be no more than a few years old. The Venus Express orbiter – launched by the European Space Agency (ESA) in 2005 – continuously sent back science data from its polar orbit around Venus until 2014. It studied lava flows on Venus by measuring the amount of infrared light emitted from Venus’ surface during nighttime.

The data obtained were good enough to distinguish between fresher and older/altered lava flows, but the actual ages of the flows still weren’t well understood.

Justin Filiberto is the study’s lead author and a USRA staff scientist at the Lunar and Planetary Institute in Houston, Texas. To learn more about the ages of lava flows on Venus, he and his colleagues simulated conditions in the intensely hot and corrosive atmosphere of Venus in a laboratory. They wanted to see how different minerals might react and change over time, under these conditions, on Venus’ surface.

It turned out that olivine – abundant in basalt rock, which makes up about 90% of Venus’ surface – reacted very rapidly. Within only weeks, it became oxidized, that is, coated with two iron oxide minerals, magnetite and hematite. From the paper:

We obtained VNIR [visible to near-infrared] reflectance spectra of natural olivine that was altered and oxidized in the laboratory. We show that olivine becomes coated, within days, with alteration products, primarily hematite … Our results indicate that lava flows lacking VNIR features due to hematite are no more than several years old. 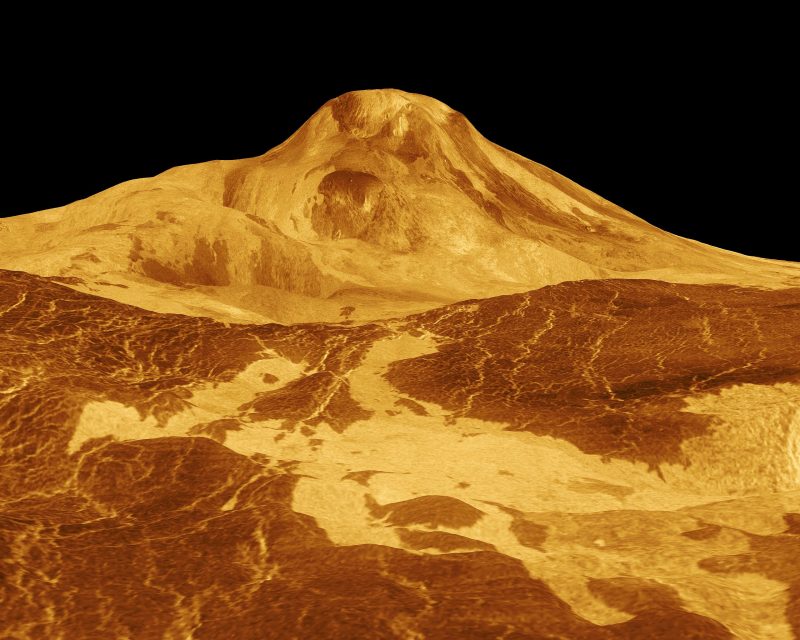 Maat Mons, a 5-mile-high (8-km-high) volcano on Venus, with lava flows. This perspective view is based on radar images from the Magellan spacecraft, which orbited Venus in the 1990s. Image via NASA/ JPL/ Wikipedia.

Absolute confirmation of active volcanoes on Venus would be a major discovery. After all, Venus is the world next-inward in orbit around the sun. It’s very similar to Earth in size and density. If it doesn’t have active volcanoes, and Earth does, the question would be, why not?

But if it does have active volcanoes, then this discovery is extremely significant in studies of all the terrestrial rocky planets – not just Venus and Earth, but also Mercury and Mars – in our solar system. Filiberto commented in a statement:

If Venus is indeed active today, it would make a great place to visit to better understand the interiors of planets. For example, we could study how planets cool and why the Earth and Venus have active volcanism, but Mars does not. 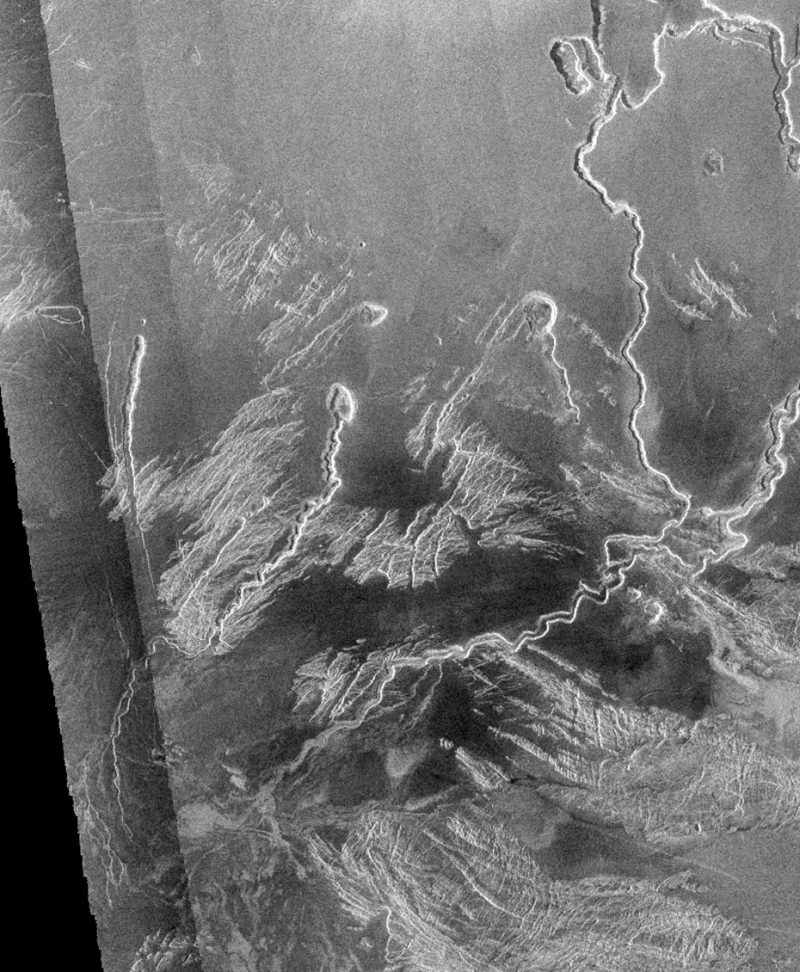 Previous studies have also made the case for active volcanoes on Venus, including this one, published on June 28, 2015, in Geophysical Research Letters. According to James Head, a geologist at Brown University and one of the 2015 study’s co-authors:

We were able to show strong evidence that Venus is volcanically, and thus internally, active today. This is a major finding that helps us understand the evolution of planets like our own.

Another clue was the previous detection of upticks in sulfur dioxide (SO2) in the atmosphere of Venus in the 1970s and 1980s by the Pioneer Venus Orbiter. From the paper:

The behavior of SO2 and polar haze can be plausibly explained by episodic injection of SO2 into the cloud top regions, for example, by active volcanism.

This was also noted in the new paper:

This active volcanism is consistent with episodic spikes of sulfur dioxide in the atmosphere measured by both the Pioneer Venus Orbiter and the Venus Express, which could have been produced by the same eruption that formed the young lava flows. 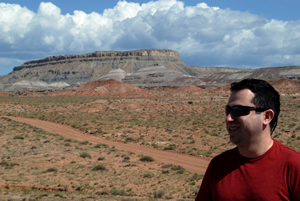 Future missions [to Venus] should be able to see … flows and changes in the surface and provide concrete evidence of its activity.

Future missions to Venus are currently on the drawing board and advocated by many researchers. They could provide more detailed data on the volcanoes, helping scientists learn their similarities to, and differences from, those on Earth.

Studies have suggested that Venus used to be more Earth-like, billions of years ago. Why did the two worlds diverge so radically, so that Earth is now livable, while Venus is perpetually cloud-enshrouded, with surface temperatures hot enough to melt lead?

It’s hoped that data from future spacecraft will help scientists understand why Venus and Earth evolved so differently. 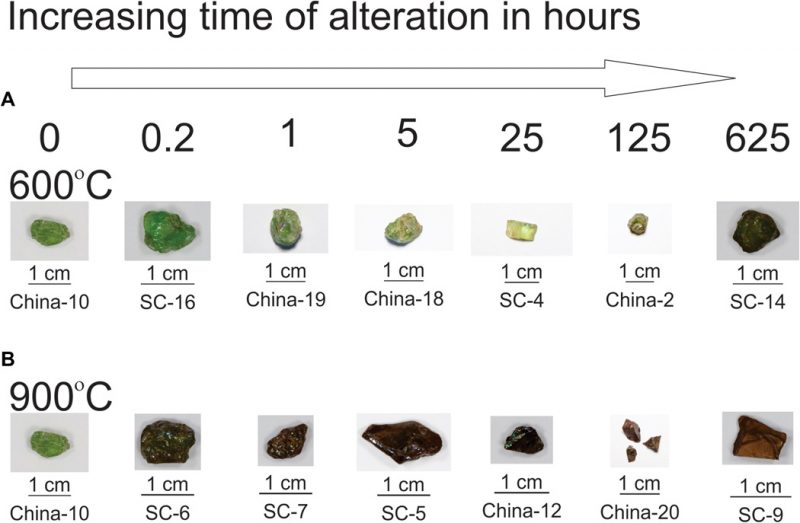 Olivine crystals before and after alteration and oxidation, as seen in laboratory experiments duplicating Venus’ atmosphere. The rapid reaction suggests that similar lava flows on Venus are only a few years old. Image via Science Advances.

Source: Present-day volcanism on Venus as evidenced from weathering rates of olivine