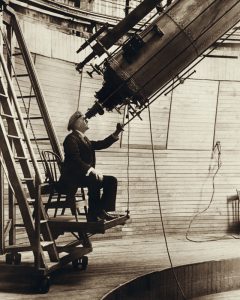 Percival Lowell observing Venus in the daytime from the observer’s chair of the 24-inch (61 cm) Alvan Clark & Sons refracting telescope, installed in the summer of 1896 at the Lowell Observatory, which he established in Flagstaff, Arizona (USA). Although known for observing Mars, this image has a long running attribution of “Percival Lowell observing the planet Venus in the daytime”,[1] something he did from 1896 onward, observing the planet high in the daytime sky with the telescope’s lens stopped down to 3 inches in diameter. This image of an older Lowell was taken in 1914.

Thank you! Your submission has been received!
Oops! Something went wrong while submitting the form.
END_OF_DOCUMENT_TOKEN_TO_BE_REPLACED