A new agreement between the European Southern Observatory and Breakthrough Initiatives will let ESO’s Very Large Telescope seek planets in the star system next door.

Things are getting exciting, both in the search for planets beyond Earth and in our ability to visit these worlds, someday. On January 9, 2017, the European Southern Observatory (ESO) announced it has signed a new agreement with Breakthrough Initiatives – which was founded by Russian high-tech billionaire Yuri Milner – to adapt ESO’s Very Large Telescope in Chile to the task of seeing planets in the Alpha Centauri system, the nearest star system to Earth. Such planets could be the targets for an eventual launch of very fast nano space probes by the Breakthrough Starshot initiative.

The Alpha Centauri system is an attractive place to seek planets – and possibly someday visit – especially since ESO’s 2016 discovery of a planet for Proxima Centauri, the closest of Alpha Centauri’s three stars. ESO’s Pale Red Dot campaign searched … and found it. The planet appears to be only slightly more massive than Earth, and it’s in Proxima Centauri’s habitable zone, meaning there’s a potential for liquid water to exist on its surface.

And it’s only, approximately, 4 light-years away. By conventional wisdom, it would take a spacecraft tens of thousands of years to travel that distance. But Breakthrough Initiatives isn’t satisfied with convention wisdom. More about that below.

First, the newly announced agreement, which was signed in late 2016. It provides funds for the VISIR (VLT Imager and Spectrometer for mid-Infrared) instrument, mounted at ESO’s Very Large Telescope (VLT) to be modified in order to greatly enhance its ability to see Proxima Centauri’s planet. That’s important because no one has actually seen it yet. Like most of the several thousand known exoplanets – planets orbiting distant suns – Proxima’s planet is known only by the the tiny back and forth wobble of its star, presumably caused by the unseen planet’s gravitational pull.

The agreement also provides for telescope time to allow a careful search program to be conducted in 2019. 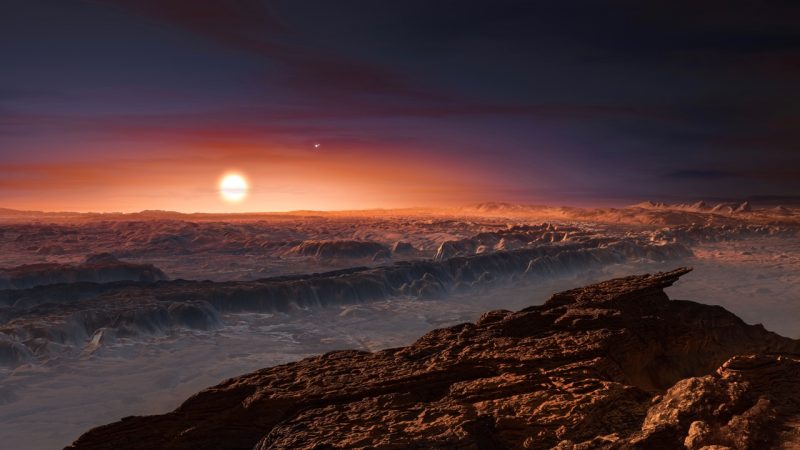 View larger. | Artist’s concept of a view of the surface of the planet Proxima b, a newly found planet orbiting in the habitable zone of Proxima Centauri, the next-nearest star. The other 2 stars in the Alpha Centauri system – a double star known as Alpha Centauri AB – also appear in the image to the upper-right of Proxima. Image via ESO. 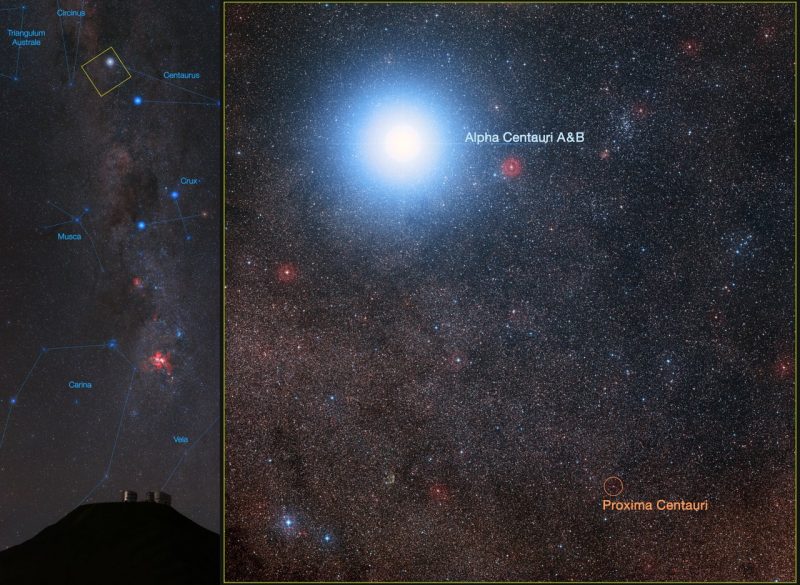 Alpha Centauri AB and its distant and faint companion Proxima Centauri. The newly discovered planet for Proxima hasn’t been seen directly yet. A direct image is part of what ESO and Breakthrough Initiatives hope to accomplish via their new agreement. Image via ESO.

Knowing where the nearest exoplanets are is of paramount interest for Breakthrough Starshot, the research and engineering programme launched in April 2016, which aims to demonstrate proof of concept for ultra-fast light-driven ‘nanocraft,’ laying the foundation for the first launch to Alpha Centauri within a generation.

In fact, Breakthrough Starshot plans not only to launch within a generation, but to get somewhere on a timescale we humans can fathom.

The plan is to spend $100 million to begin proof-of-concept studies for a 100-million-mile-per-hour flyby mission to the Alpha Centauri system. The stars are about 4 light-years or 25 trillion miles (40 trillion km) away. Breakthrough Starshot is seeking confirmation that it’s possible to use a 100-gigawatt light beam to propel approximately 1,000 ultra-lightweight nanocraft to 20 percent of light speed.

If it’s shown to be possible, this fleet of nanostarships could reach Alpha Centauri within about 20 years of launch.

Due to the finite travel speed of light (including radio waves), we would then wait 4 more years to hear back from any nanocraft that successfully swept through the Alpha Centauri system.

The first step in all of this, of course, is to examine the Alpha Centauri system closely using earthly telescopes. That is what the agreement between ESO and Breakthrough Initiatives is all about. 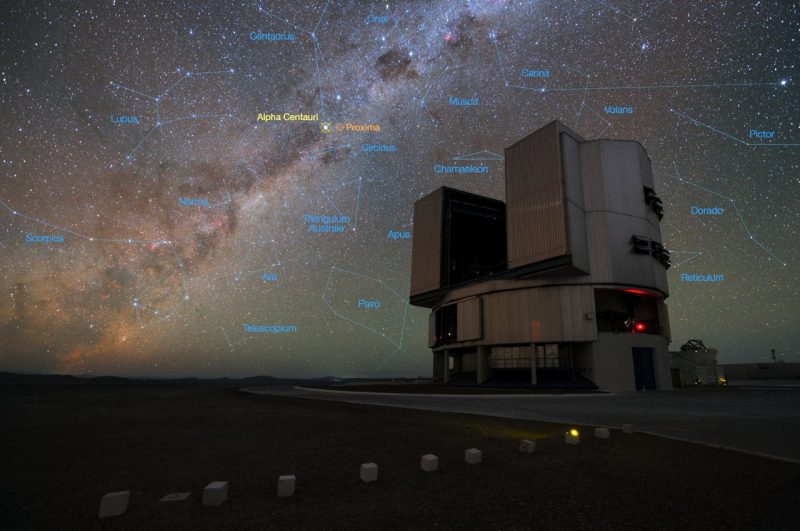 ESO’s Very Large Telescope (VLT) at the Paranal Observatory in Chile, against the rich backdrop of southern skies. Alpha Centauri, closest star system to Earth, appears to the eye from this vantage point as a single bright star. Image via ESO.