ESA considers a high-energy survey of the early universe, an infrared observatory to study the formation of stars, planets and galaxies, and a Venus orbiter.

A high-energy survey of the early universe, an infrared observatory to study the formation of stars, planets and galaxies, and a Venus orbiter are to be considered for ESA’s fifth medium class mission in its Cosmic Vision science program, with a planned launch date in 2032.

The three candidates, the Transient High Energy Sky and Early Universe Surveyor (Theseus), the SPace Infrared telescope for Cosmology and Astrophysics (Spica), and the EnVision mission to Venus were selected from 25 proposals put forward by the scientific community.

Theseus, Spica and EnVision will be studied in parallel and a final decision is expected in 2021. 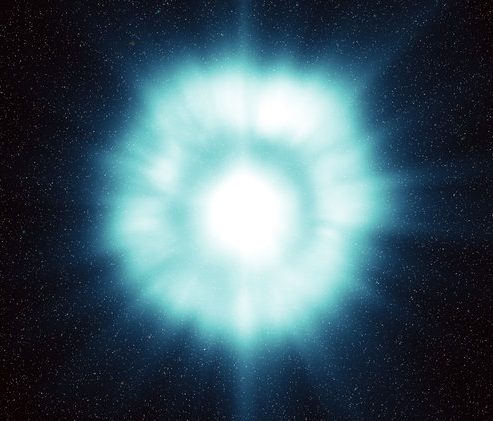 Artist’s concept of a gamma ray burst. Image via ESA.

How did the universe begin and what is it made of?

Theseus is a novel mission to monitor transient events in the high-energy universe across the whole sky and over the entirety of cosmic history. In particular, it promises to make a complete census of gamma-ray bursts from the universe’s first billion years, to help shed light on the life cycle of the first stars.

Gamma-ray bursts can be released during a supernova, or as a dying star collapses after such an explosion to form a neutron star or black hole, for example. Theseus would provide real-time triggers and accurate locations of such high-energy events, which could also be followed up by other space- or ground-based facilities operating at complementary wavelengths.

In addition, Theseus would also be able to follow up on gravitational wave observations by locating and identifying radiation from sources spotted by other detectors.

How did the first stars and galaxies form?

Understanding the origin and evolution of galaxies, stars, planets and life itself is a fundamental objective of astronomy. These topics can be explored with a sensitive infrared survey, peering through the clouds of dust that typically obscure the sites of star birth.

Spica, a joint European-Japanese project that offers significant improvement in far-infrared spectroscopic and survey capabilities over NASA’s Spitzer and ESA’s Herschel space observatories, would ensure continuing advances can be made in this field.

It would also complement the capabilities of existing and foreseen major observatories, such as the ground-based Atacama Large Millimetre/submillmetre Array and the space-based James Webb telescope.

A comparison of terrestrial planets. Image via ESA.

Why did Earth and Venus evolve so differently?

Venus is often considered as Earth’s evil twin. Despite being roughly the same size and neighbors in the inner solar system, the two planets have evolved very differently: Venus has experienced a catastrophic runaway greenhouse effect and today is enshrouded with a thick toxic atmosphere.

EnVision follows on from ESA’s highly successful Venus Express that focused primarily on atmospheric research. Planned to be implemented with NASA participation, next-generation EnVision would determine the nature and current state of geological activity on Venus and its relationship with the atmosphere, to better understand the different evolutionary pathways of the two planets.

It would map the surface and obtain detailed radar images, improving on those obtained by NASA’s Magellan in the 1990s, to provide greater insight into the geological evolution of the surface.

The next years will provide a detailed technical and scientific definition of the three concepts, before one mission is selected to fill the fifth medium-class opportunity in ESA’s Cosmic Vision plan.

Solar Orbiter, Euclid, Plato and Ariel have already been selected as medium-class missions to be launched during the next decade.