Emirates Mars Mission to launch in 2020

The Emirates Mars Mission – which carries the name Hope – will become the first-ever mission to the Red Planet by any Arab country.

The biggest initiative under the space program of the United Arab Emirates (UAE) is the Emirates Mars Mission. No Arab nation has launched a probe beyond Earth orbit before, making the UAE’s mission to Mars historically and regionally significant. The UAE Mars mission aims to bring the Arab world together and to give a message that Arabs can also make their mark in the world of innovation & technology.

The probe to be sent to Mars is named ‘Hope’, and the mission, which is due to launch in 2020, has already begun to inspire young Arabs to think about space and science.

The probe is being built by Emirati hands at the Mohammed bin Rashid Space Centre (MBRSC) in Dubai.

When the Hope probe will enter the orbit around the Red Planet, it will study the Martian atmosphere to find out why a land that was once quite similar to that of planet Earth now finds itself barren with no signs of sustainable life. 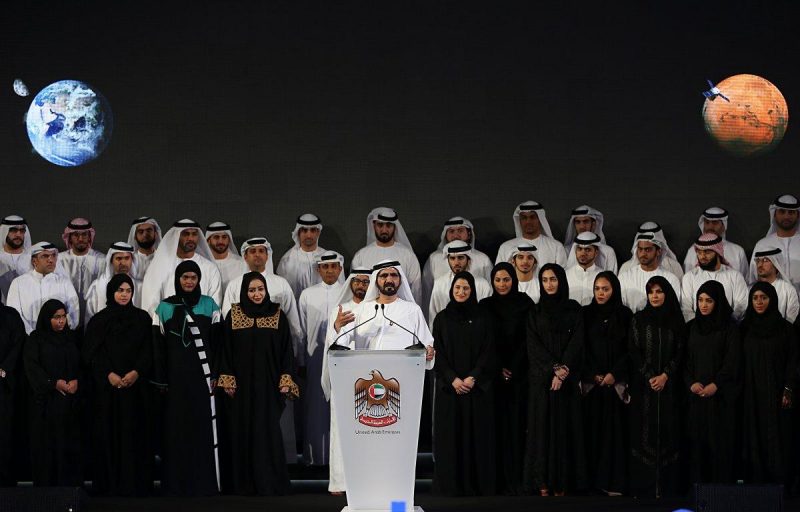 Dubai ruler Sheikh Mohammed bin Rashid Al Maktoum, center, announces a United Arab Emirates’ Mars mission named “Hope” — or “al-Amal” in Arabic — which is scheduled be launched in 2020, during a ceremony in Dubai in May, 2015. Image and caption via nydailynews.com.

Bottom line: The Emirates Mars Mission – or Hope Mars – is planned to launch to Mars in 2020 and make a seven-month journey to the Red Planet.