Astronomers have “weighed” only the nearest supermassive black holes. Now, with a gravity lens and Einstein ring, they’ve weighed one 12 billion light-years away. 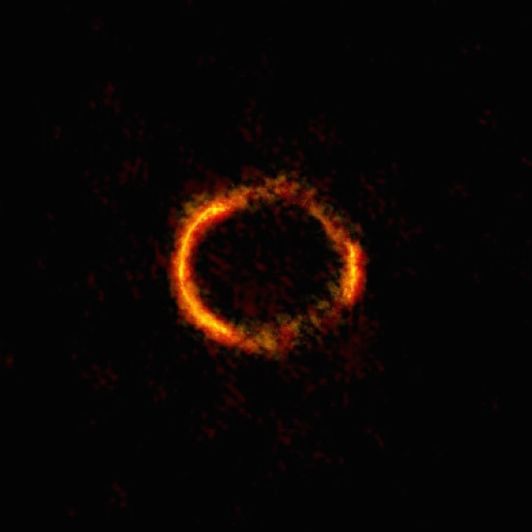 Highest-resolution observation ever of the gravitational lens system SDP.81, and its Einstein ring. Image via ALMA (NRAO/ESO/NAOJ); B. Saxton NRAO/AUI/NSF

A gravitational lens happens when astronomers on Earth look toward a huge galaxy or galaxy cluster, so massive that its gravity distorts any light passing near. The massive object acts like a lens in space, spreading the light out, often to produce multiple images of a more distant object that happens to be shining behind it. Or, if the distant background object and the intervening massive galaxy are perfectly aligned, the gravitational lens may spread the light to produce an image of a ring in space.

A ring-shaped image produced in this way is known as an Einstein Ring. The ring itself not a real physical structure in space, but just a play of light and gravity, a result of the gravitational lensing effect. And yet these Einstein rings have revealed some of the mysteries of the cosmos to the astronomers who study them.

Astronomers in Asia announced this week (September 30, 2015) that they’d obtained the clearest-ever images of a gravitational lens called SDP.81. They carefully studied the Einstein Ring produced by this system, in order to calculate that a supermassive black hole located near the center of SDP.81 – the lensing galaxy – may contain over 300 million times the mass of our sun.

In other words, the gravitational lens and its resulting Einstein ring let them weigh a black hole. The Astrophysical Journal published their results on on September 28. 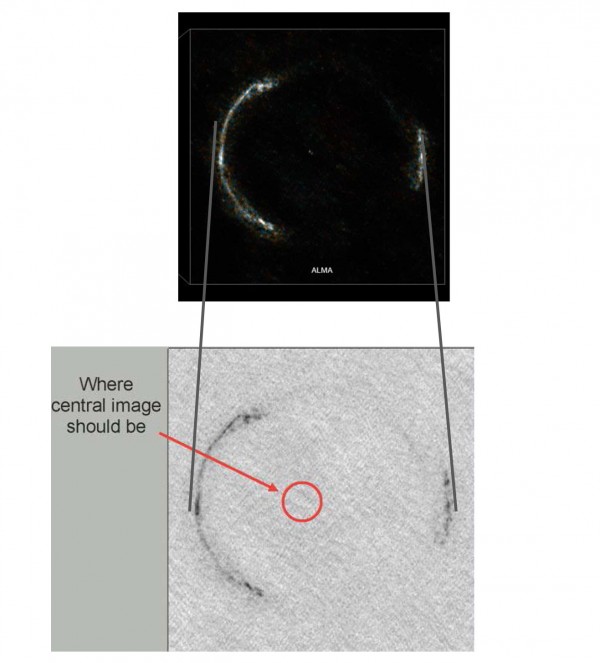 Astronomers determined that the foreground galaxy in the SDP.81 system, whose mass is lensing the background source into the Einstein Ring, contains a supermassive black hole with more than 300 million solar masses. Image via ALMA (NRAO/ESO/NAOJ)/ Kenneth Wong (ASIAA).

The background galaxy contains a large amount of dust that has been heated by vigorous star formation, causing it to shine brightly in submillimeter light.

These astronomers used a telescope sensitive to this form of light – the Atacama Large Millimeter/submillimeter Array (ALMA) in Chile – to acquire the images.

The left panel shows the foreground lensing galaxy (observed with Hubble), and the gravitational lens system SDP.81, which forms an almost perfect Einstein Ring but is hardly visible. The middle image shows the sharp ALMA image of the Einstein Ring. The foreground lensing galaxy is invisible to ALMA, as it does not emit strong submillimeter-wavelength light. The resulting reconstructed image of the distant galaxy (right) using sophisticated models of the magnifying gravitational lens reveals fine structures within the ring that have never been seen before: several giant clouds of dust and cold molecular gas, which are the birthplaces of stars and planets. Image via ALMA (NRAO/ESO/NAOJ)/Y. Tamura (The University of Tokyo)/Mark Swinbank (Durham University).

Three astronomers at the Institute of Astronomy and Astrophysics (ASIAA), headquartered at on the campus of National Taiwan University, conducted this research study. They are postdoctoral fellow Kenneth Wong, assistant research fellow Sherry Suyu and associate research fellow Satoki Matsushita.

They “weighed” the massive foreground lensing galaxy itself and found that it contains over 350 billion times the mass of our sun. Their statement explained:

From this, they calculated that the supermassive black hole, located very close to the center of the SDP.81, may contain over 300 million times the mass of the sun.

The first author of the article, Dr. Kenneth Wong, explained [that] almost all massive galaxies seem to have supermassive black holes at their centers:

‘They can be millions, or even billions of times more massive than the sun. However, we can only directly calculate the mass for very nearby galaxies. With ALMA, we now have the sensitivity to look for the central image of the lens, which can allow us to determine the mass of much more distant black holes.

These astronomers said that measuring the masses of more distant black holes is the key to understanding their relationship with their host galaxies and how they grow over time. 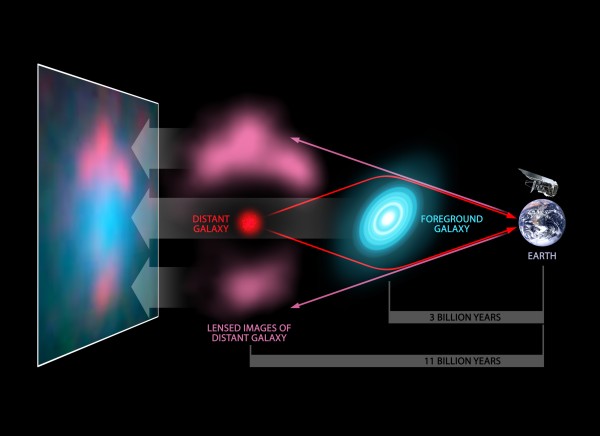 View larger. | Ignore the distances on this diagram (it’s from a different source) and just notice how a gravitational lens works. Image via Herschel ATLAS Gravitational Lenses.

Bottom line: Astronomers can directly “weigh” only the nearest supermassive black holes in galaxy centers. Using a gravitational lens, and an Einstein ring, they now weighed a black hole at the center of galaxy located 12 billion light-years away.