On this episode of EarthSky News, an update on the idea that the early Earth collided with a Mars-sized proto-planet to make the moon. That and more. Join us.

Special thanks to Slooh.com for producing this video.

Here’s more on that Earth-moon story … 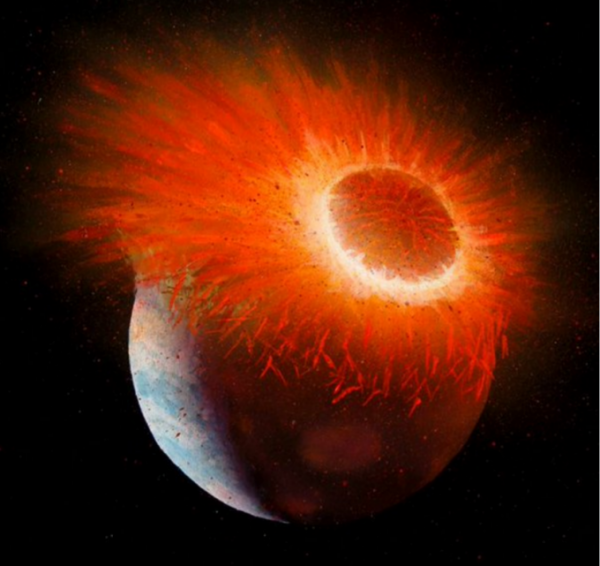 Artist’s impression of the head-on collision that created our moon. Image via UCLAnewsroom.

Scientists have developed this model – a Mars-sized body colliding with Earth to create our moon – to such an extent that they’ve even given the theoretical colliding body a name. They call it Theia (pronounced THAY-eh).

If the collision did occur, it was approximately 100 million years after the Earth formed, UCLA geochemists and colleagues report.

These scientists reported on their new head-on model – described briefly in the video above – in the January 29, 2016 issue of the journal Science.

They said the key to their model was an analysis of oxygen atoms in both Earth and moon rocks. More than 99.9 percent of Earth’s oxygen is O-16, so called because each atom contains eight protons and eight neutrons. But there also are small quantities of heavier oxygen isotopes: O-17, which have one extra neutron, and O-18, which have two extra neutrons.

Edward Young, a UCLA professor of geochemistry and cosmochemistry, is lead author of the new study. Young’s research team used state-of-the-art technology and techniques to make extraordinarily precise and careful measurements of Earth and moon rocks.

The fact that oxygen in rocks on the Earth and our moon share chemical signatures was very telling, Young said. Had Earth and Theia collided in a glancing side blow, the vast majority of the moon would have been made mainly of Theia, and the Earth and moon should have different oxygen isotopes.

A head-on collision, however, likely would have resulted in similar chemical composition of both Earth and the moon, which is observed. Young said:

Theia was thoroughly mixed into both the Earth and the moon, and evenly dispersed between them.This explains why we don’t see a different signature of Theia in the moon versus the Earth.

Theia, by the way, is not thought to have survived the collision, although it now makes up large parts of Earth and the moon, these scientists say. 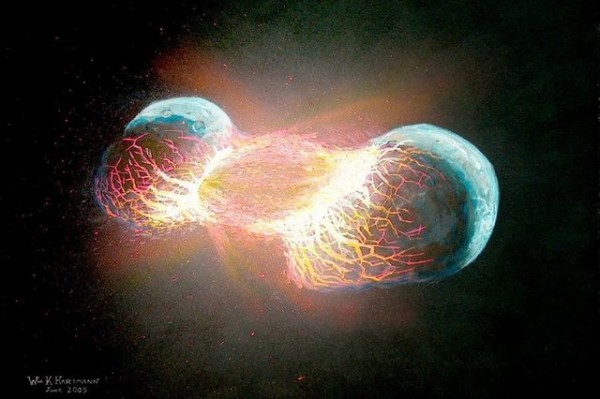 The extremely similar chemical composition of rocks on the Earth and moon helped scientists determine that a head-on collision, not a glancing blow, took place between Earth and Theia. Image: Copyright William K. Hartmann

Bottom line: On this episode of EarthSky News – February 4, 2016 – we talk about the head-on collision that created Earth’s moon.