Rosetta mission plans to land a probe on a comet in late 2014. Plus skywatching as winter turns to spring. Song of the week: “Born to Roam” by Shakey Graves. 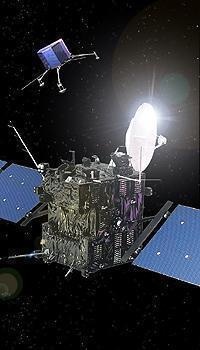 This artist’s impression shows the Rosetta Orbiter in the foreground and the Lander in the background. Image credit: ESA

“The Snow” by South By Southwest festival showcasing band The Eastern Sea.

Skywatching the seasons Skywatching expert Deborah Byrd talks about what to look out for in the night sky as winter turns to spring in the northern hemisphere.