New evidence from meteorites supports the ongoing speculation that life on Earth might have been seeded from space.

New evidence from meteorites supports the ongoing speculation that life on Earth might have been seeded from space.

Research published in August, 2011 in the Proceedings of the National Academy of Sciences – suggests that meteorites are likely the source of certain nucleobases – the building blocks of our genetic material on Earth – in greater diversity and quantity than scientists previously thought.

Our research results have shown the nucelobases, which are the building blocks of your genetic material, DNA, are found in meteorites. That result wasn’t so new, in that people have known this for actually the last 50 years or so. But no one’s been able to prove definitively if these building blocks of DNA were extraterrestrial in origin or if they were the remnants of terrestrial contamination in the meteorite.

The evidence, said Callahan, comes from 12 meteorites, nine of which landed on Antarctica. They contain not only the chemical building blocks of DNA, but other molecules produced from simple ingredients found in space, such as water and ammonia. He said:

Now if those components can be used later on, which is what the idea is of why this would be so important, these  meteorites could have brought in some important ingredients that may have assisted the origin of life.

Because they moved in space, remaining pristine, until they fell to Earth, meteorites hold a record of chemicals that existed in the early solar system. Some of these chemicals might have been a crucial source of the organic compounds that gave rise to life on Earth. Since the 1960s, scientists have been trying to find proof that nucleobases came to Earth on meteorites.

Extensive research has shown that amino acids, which string together to form proteins, exist in space and have arrived on our planet piggybacked on a type of organic-rich meteorite called carbonaceous chondrites. But it has been difficult to prove that the nucleobases found on meteorite samples are not due to contamination from sources on Earth.

Examples of carbonaceous chondrites. Via Wikimedia

The research team, which included Jim Cleaves of the Carnegie Institution for Science Geophysical Laboratory, used advanced spectroscopy techniques to purify and analyze samples from 11 different carbonaceous chondrites and one ureilite, a very rare type of meteorite with a different chemical composition. This was the first time all but two of these meteorites had been examined for nucleobases. 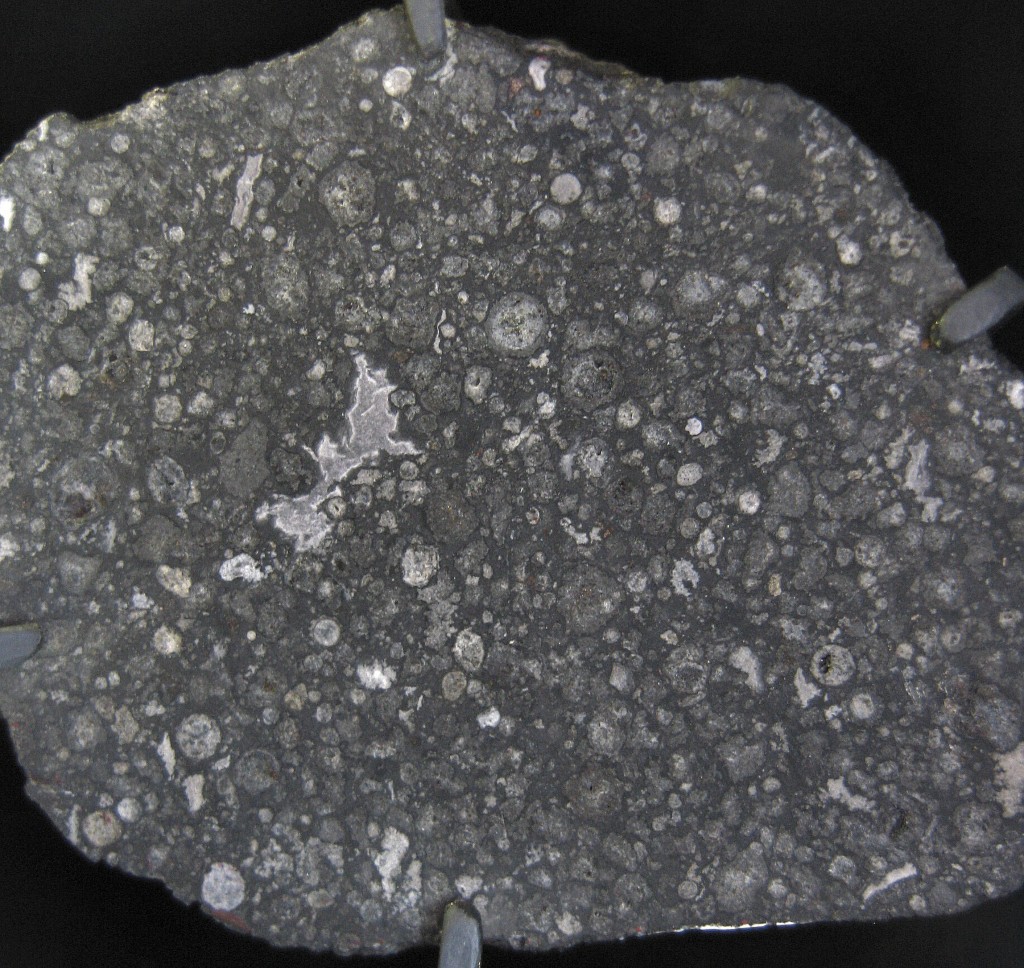 A slice of the 4.5-billion-year-old Allende meteorite, pictured on the left in the image above. Via Wikimedia

The team tested their conclusion with experiments to reproduce nucleobases and analogs using chemical reactions of ammonia and cyanide, which are common in space. Their lab-synthesized nucleobases were very similar to those found in the carbonaceous chondrites, although the relative abundances were different. This could be due to chemical and thermal processing that the meteorite-origin nucleobases underwent while traveling through space.

The results of the study have far-reaching implications: the earliest forms of life on Earth might have been assembled from materials delivered to Earth by meteorites.

Callahan spoke of an intense period of meteorite impacts on both the Earth and the moon around four billion years ago.

So maybe, these meteorites are flying all over the universe impacting different objects and bringing some pretty important things. And maybe, if the conditions are right, maybe the same sort of process for life could be happening elsewhere. So the likelihood of life elsewhere has kind of increased, just a little bit more.

Listen to the 90-second EarthSky interview with Michael Callahan on how meteorites might have seeded Earth life, at top of page.