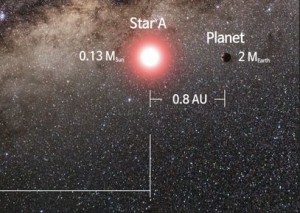 This artist’s rendering shows a newly discovered planet (far right) orbiting one star (right) of a binary star system. The discovery, made by a collaboration of international research teams and led by researchers at The Ohio State University, expands astronomers’ notions of where to look for planets in our galaxy. Credit: Cheongho Han, Chungbuk National University, Republic of Korea.

Thank you! Your submission has been received!
Oops! Something went wrong while submitting the form.
END_OF_DOCUMENT_TOKEN_TO_BE_REPLACED