Earth-sized planets with lots of water

A computer simulation suggests that low-mass stars might be a good place to look for Earth-sized exoplanets, in their stars’ habitable zones. 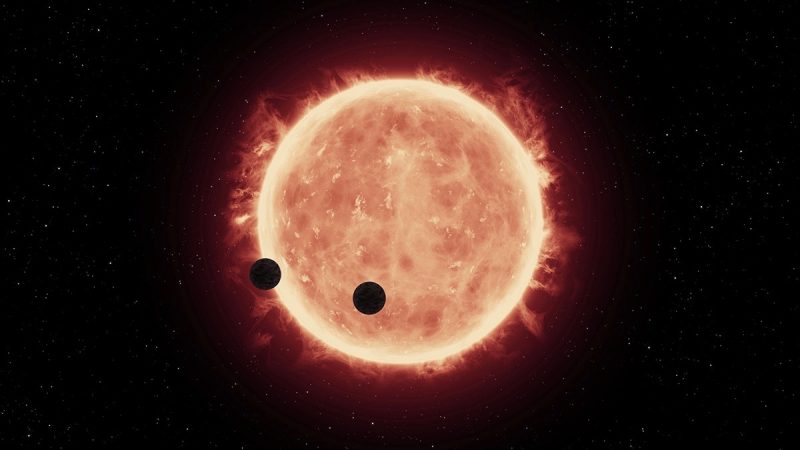 The University of Bern said on October 24, 2016 that computer simulations by its astrophysicists – related to the formation of planets orbiting in the habitable zones of low-mass stars such as Proxima Centauri – show that these planets are most likely to be roughly the size of the Earth and to contain large amounts of water.

That’s exciting in part because there are a lot of low-mass stars. Also, if you’ll recall, astronomers announced a planet for Proxima Centauri, the nearest star to Earth at only 4.2 light-years away, in August of 2016. Proxima’s planet does orbit the star’s habitable zone, the zone around the star within which liquid water can exist. Proxima is not a star like our sun. It’s 10 times less massive and 500 times less luminous.

Earlier, in May of 2016, astronomers had announced a similar planet orbiting an even less massive star than Proxima, a star called Trappist-1, which is located at a slightly greater distance, 40 light-years (still a hop and a skip in terms of the distance scale of the galaxy).

Now astronomers are speculating about whether low-mass stars like Trappist-1 and Proxima Centauri might be a good place to look for Earth-sized exoplanets orbiting in the habitable zone. The new work from University of Bern confirms that possibility.

Yann Alibert and Willy Benz at University of Bern carried out the computer simulations – the first of their kind – of the formation of a hypothetical population of planets orbiting 10 times less massive than our sun. Yann Alibert explained:

Our models succeed in reproducing planets that are similar in terms of mass and period to the ones observed recently.

Interestingly, we find that planets in close-in orbits around these type of stars are of small sizes. Typically, they range between 0.5 and 1.5 Earth radii with a peak at about 1.0 Earth radius.

Future discoveries will tell if we are correct!

The results of the computer simulation have been accepted for publication by the peer-reviewed journal Astronomy and Astrophysics.

Read more about this study via University of Bern

Bottom line: Astrophysicists at University of Bern conducted computer simulations showing that low-mass stars such as Proxima Centauri may be likely to form Earth-sized planets in their habitable zones, the area around a star within which liquid water can exist.