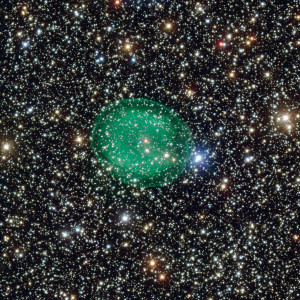 This intriguing picture from ESO’s Very Large Telescope shows the glowing green planetary nebula IC 1295 surrounding a dim and dying star. It is located about 3300 light-years away in the constellation of Scutum (The Shield). This is the most detailed picture of this object ever taken.

Thank you! Your submission has been received!
Oops! Something went wrong while submitting the form.
END_OF_DOCUMENT_TOKEN_TO_BE_REPLACED