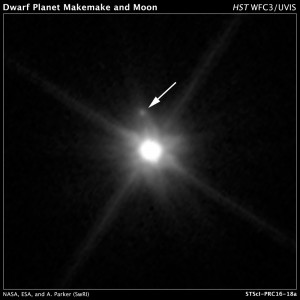 This Hubble Space Telescope image reveals the first moon ever discovered around the dwarf planet Makemake. The tiny moon, located just above Makemake in this image, is barely visible because it is almost lost in the glare of the very bright dwarf planet. The moon, nicknamed MK 2, is roughly 100 miles wide and orbits about 13,000 miles from Makemake. Makemake is 1,300 times brighter than its moon and is also much larger, at 870 miles across.

Previous searches for a moon around Makemake turned up empty. The moon may be in an edge-on orbit, so part of the time it gets lost in the bright glare of Makemake.

Thank you! Your submission has been received!
Oops! Something went wrong while submitting the form.
END_OF_DOCUMENT_TOKEN_TO_BE_REPLACED