Dwarf planet Makemake has a moon

This Hubble Space Telescope image reveals the first moon ever discovered around little Makemake, in the outermost region of our solar system. 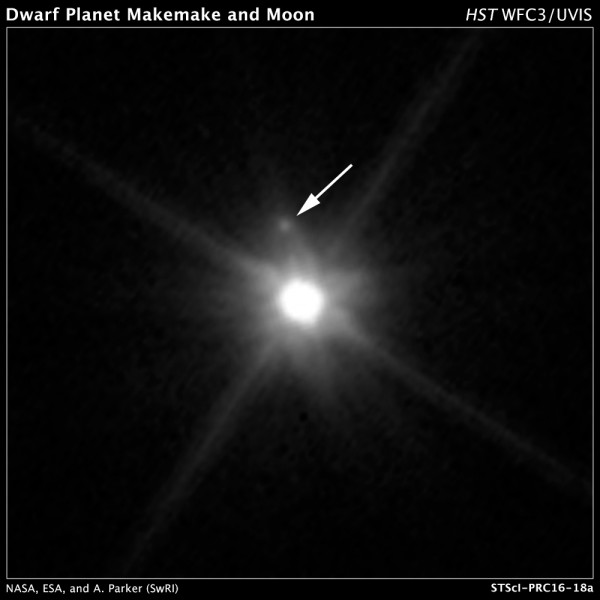 NASA said today (April 26, 2016) that its Hubble Space Telescope has spotted a small, dark moon orbiting Makemake, a little world – categorized as a dwarf planet – on the outskirts of our solar system.

Makemake is pronounced mah-kay-mah-kay (hear pronunciation). Astronomers discovered it in 2005 and named it for a creation deity of the Rapa Nui people of Easter Island. It’s an icy world in our solar system’s Kuiper Belt, about 50 times farther from the sun than Earth. It has a diameter about 2/3s that of Pluto, but – although it’s the second-brightest dwarf planet after Pluto – it shines with only about a fifth of Pluto’s brightness. Its moon, of course, is much fainter.

Makemake is one of five objects recognized as dwarf planets by the International Astronomical Union.

This is the first discovery of a companion object to Makemake.

Astronomers made the observations that revealed Makemake’s moon in April, 2015, with Hubble’s Wide Field Camera 3. They announced the discovery on April 26, 2016 in a Minor Planet Electronic Circular. The NASA statement said:

The observing team used the same Hubble technique to observe the moon as they did for finding the small satellites of Pluto in 2005, 2011, and 2012. Several previous searches around Makemake had turned up empty.

… Our preliminary estimates show that the moon’s orbit seems to be edge-on, and that means that often when you look at the system you are going to miss the moon because it gets lost in the bright glare of Makemake.

Read more about Makemake’s moon and what it means for astronomical research.