New images of the oldest known pairs of quasars, farthest and oldest yet seen, show that their home galaxies are colliding.

Astronomers said on April 6, 2021, that they’ve spotted two rare double quasars. Each pair is thought to reside in the midst of two merging galaxies in the very distant universe. Astronomers estimate that only one in 1,000 quasars is double, so finding two double quasars could be seen as lucky. The astronomers would tell you, though, that they didn’t use luck. They used a series of telescopes that led them from one step to the next, in a methodical unraveling of the mystery of which bright, apparently single quasars might actually be double. As lead researcher Yue Shen of the University of Illinois at Urbana-Champaign put it:

Finding these double quasars is like finding a needle in a haystack.

A collaboration between scientists and some of the best telescopes in the world led to new images of the double quasars. The study was published April 1, 2021, in the peer-reviewed journal Nature Astronomy.

To find the quasar pairs, astronomers pored over 3D maps from the Sloan Digital Sky Survey to find double-quasar candidates. Then they used data from the Gaia Observatory to pin down the locations. Gaia is able to detect slight jiggles in the movement of the distant quasars. Because quasars vary in brightness depending on how much material the black hole is consuming at the time, they produce a slight flickering appearance. The scientists compared the alternating brightness between the quasar pair, as seen in the video above, to that of the dual blinking lights at a railroad crossing. Finally, the team of scientists used the Hubble Space Telescope to image four candidates, two of which turned out to be close pairs of quasars.

The video simulation above shows the brilliant, flickering light from a pair of quasars. Astronomers deduced that the blinking light is a telltale sign of the presence of two quasars and not a single object.

Each of the two newly discovered pairs of quasars – or four total quasars – were discovered within 10,000 light-years of their mate. That’s very close on a cosmic distance scale; by comparison, our sun is about 26,000 light-years from the supermassive black hole at the center of our Milky Way galaxy.

A quasar is an object in the distant universe that produces prodigious amounts of energy. Quasars have such astounding brilliance that they can be seen across vast reaches of the universe. Thus we see them at a time when the universe was young, and so they can help reveal conditions in the early cosmos. Quasars are thought to lie at the hearts of young galaxies in the early universe. A quasar’s energy is thought to be created when a supermassive black hole furiously feeds on infalling matter. The light of these two quasar pairs comes to us from a time when the universe was about 10 billion years old. If we could see them today, as they are right now, we might find that each quasar pair has merged to form a new giant black hole.

More than 100 double quasars are already known, but none reside as far away in space, and as far back in time, as these new pairs. Scientists hope the discoveries will yield a new way to probe collisions among galaxies and the merging of supermassive black holes in the early universe. Team member Nadia Zakamska of Johns Hopkins University said:

This truly is the first sample of dual quasars at the peak epoch of galaxy formation with which we can use to probe ideas about how supermassive black holes come together to eventually form a binary.

As these distant galaxies begin to merge and the gas from gravitational distortions sends material inward, the quasars fire up. The radiation coming from the quasar will eventually power winds that sweep the inner region of the galaxy free of gas and dust. This creates a dearth of star-forming material, and as star formation ceases the galaxies settle down into their elliptical shapes.

Zamaska explained the importance of this discovery:

Quasars make a profound impact on galaxy formation in the universe. Finding dual quasars at this early epoch is important because we can now test our long-standing ideas of how black holes and their host galaxies evolve together. 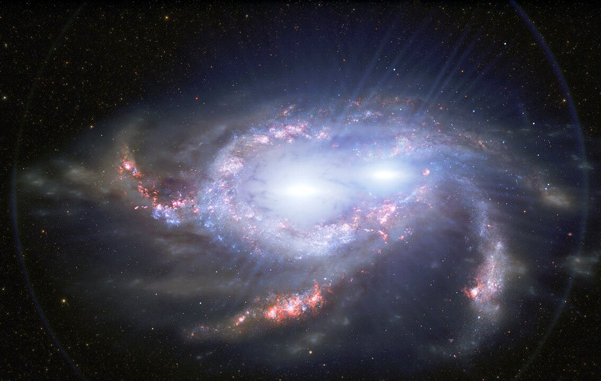 This artist’s concept shows 2 blazingly bright quasars and the merging galaxies in which they reside. Both quasars have supermassive black holes at their cores. A new study suggests that, as the 2 galaxies merge and the quasars get closer together, the 2 black holes will merge to form an even-more-massive black hole. Image via NASA/ ESA/ J. Olmsted/ STSci.

Someday, a double quasar and galactic merger like the one scientists have seen far across the universe will happen much closer to home. Our Milky Way galaxy and neighboring Andromeda galaxy are on a collision course. Several billion years from now, as our two galaxies begin to interact and pull in material from each other, the currently quiet supermassive black holes at the centers of the galaxies will fire up. The infalling material will light the quasars, creating two brilliant spotlights that will shine as bright or brighter than a full moon in our nighttime sky. The radiation from the quasars will sterilize planets and wipe out any civilizations within reach.

Bottom line: Scientists have recently released Hubble images of the farthest- and oldest-known pairs of quasars in merging galaxies.