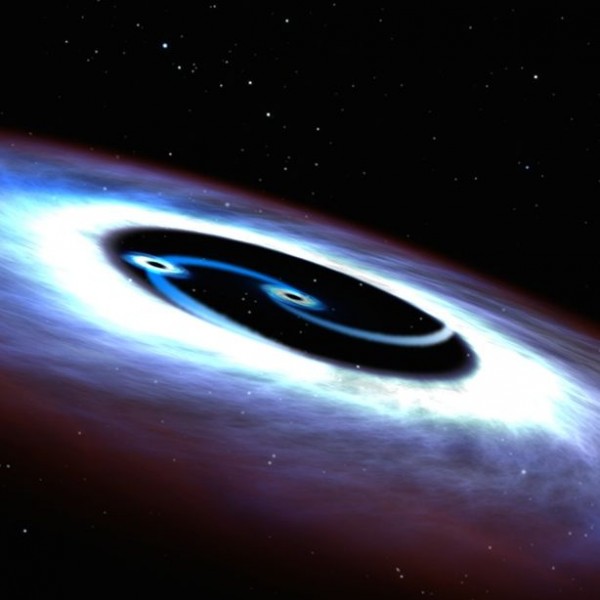 View larger. | Artist’s concept of a double black hole, at the heart of a quasar. Image via NASA, ESA, and G. Bacon (STScI)

Moons orbit planets, planets orbit suns, little asteroids orbit each other, and mighty stars and galaxies orbit each other. So it’s not surprising that enigmatic black holes can orbit each other, too. Binary black holes may be the remnants of high-mass binary star systems, or – if the black holes are the super-sized, galactic-center variety – they may be the result of two galaxies that met and merged in space. Astronomers using NASA’s Hubble Space Telescope announced on August 27, 2015 that Markarian 231 (Mrk 231) – the nearest galaxy to Earth that hosts a quasar – is powered by two central black holes.

Since it’s relatively nearby, only about 600 million light-years away in the direction of the constellation Ursa Major the Greater Bear, Markarian 231 has been studied for years for astronomers. They believed already that Mrk 231 had previously merged with another galaxy. Evidence of that recent merger comes from the host galaxy’s asymmetry, and its long tidal tails of young blue stars.

What’s more, Mrk 231 was already believed to contain one supermassive black hole at its core. Now, new evidence suggests there are two. 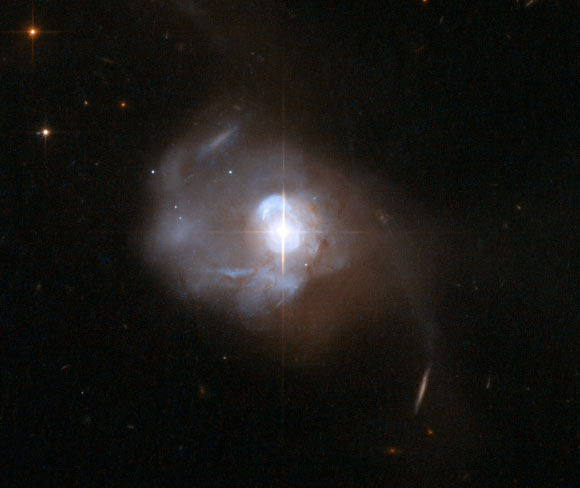 The recent study showing two black holes looked at Hubble archival observations of ultraviolet radiation emitted from the center of Mrk 231. The astronomers said in their statement on August 27:

If only one black hole were present in the center of the quasar, the whole accretion disk made of surrounding hot gas would glow in ultraviolet rays. Instead, the ultraviolet glow of the dusty disk abruptly drops off towards the center. This provides observational evidence that the disk has a big donut hole encircling the central black hole.

The best explanation for the observational data, based on dynamical models, is that the center of the disk is carved out by the action of two black holes orbiting each other.

The second, smaller black hole orbits in the inner edge of the accretion disk, and has its own mini-disk with an ultraviolet glow.

They now estimate the mass of the central black hole to be 150 million times the mass of our sun. Meanwhile, the companion black hole is thought to weigh in at 4 million solar masses, about the same mass as the black hole at the center of our own Milky Way galaxy. The double black hole in Mrk 231 completes a mutual orbit every 1.2 years.

The lower-mass black hole is believed to be the remnant of a smaller galaxy that merged with Mrk 231.

The binary black holes are predicted to spiral together and collide within a few hundred thousand years.

These astronomers say that their finding suggests that quasars — the brilliant cores of active galaxies — may commonly host two central supermassive black holes that fall into orbit about one another as a result of the merger between two galaxies. Youjun Lu of the National Astronomical Observatories of China, Chinese Academy of Sciences, said:

We are extremely excited about this finding because it not only shows the existence of a close binary black hole in Mrk 231, but also paves a new way to systematically search binary black holes via the nature of their ultraviolet light emission.

Co-investigator Xinyu Dai of the University of Oklahoma told EarthSky:

Second, the proximity of this binary black hole in this nearby quasar allows us to study it in detail.

The structure of our universe, such as those giant galaxies and clusters of galaxies, grows by merging smaller systems into larger ones, and binary black holes are natural consequences of these mergers of galaxies.

These astronomers say that the result of the merger has been to make Mrk 231 an energetic starburst galaxy with a star-formation rate 100 times greater than that of our Milky Way galaxy. The infalling gas is thought to fuel the black hole “engine,” triggering outflows and gas turbulence that incites a firestorm of star birth.

The results were published in the August 14, 2015, edition of The Astrophysical Journal.

Bottom line: A study shows that Markarian 231 (Mrk 231) – the nearest galaxy to Earth that hosts a quasar – is powered by two central black holes.