Posted by Eddie Irizarry and Deborah Byrd in Science Wire | Space | May 8, 2015

Roscosmos said the craft “ceased to exist” over the Pacific. The final time of reentry is 9:20 p.m. CDT (02:20 UTC), with an accuracy of plus or minus 1 minute.

UPDATE MAY 7, 2015 AT 11:45 P.M. CDT (May 8 at 4:45 UTC): The unpiloted Russian re-supply ship due to re-enter Earth’s atmosphere Thursday evening (according to U.S. clocks) appears to have done so. Roscosmos – the Russian space agency – both tweeted and said in an online update that the Progress 59P, also known as Progress M-27M, mission ended and the craft destroyed during a fiery plunge over the Pacific Ocean late Thursday. It probably looked somewhat like the artist’s visualization above, which was created by Analytical Graphics, Inc.

Read more about the final time of re-entry here.

Earlier Thursday evening, there were reports from S. America of sightings of the descending spacecraft, as it lost altitude above Earth’s surface. For example, Kirovoleg wrote at an online space forum:

I`ve just watched it pass overhead on Buenos Aires, at first it was quite dim but then it got quite bright for a moment, then dim again and bright. I guess it is still tumbling and that is why it changed intensity.

The craft – carrying 6,000 pounds of food, fuel, and supplies for International Space Station – was declared lost when, shortly after its April 28 launch, it began spinning out of control.

Its reentry on May 7-8 was not controlled, which means the exact time and location were unknown in advance. But thanks to spacecraft technologies, computers and global community of space fans on the Internet, the craft was continuously tracked throughout the day Thursday prior to its final fall.

Visual sighting reports of the descending #Progress coming in from Argentina and Uruguay: https://t.co/6LWzP1iENe and https://t.co/tGUer3wzDX

Progress M-27M now has only a few hours left at best, it is in it's last few orbits around the World. 2 to 6 hours from now it's toast.

Because over 70% of the surface of Earth is covered by water, there was always a high probability that the Progress 59 would reenter over an ocean. But the spacecraft’s orbital inclination also caused it to pass over land areas. The European Space Agency (ESA), which said it was “in close contact with Russian and U.S. authorities regarding the Progress M-27M / 59P mission situation,” said on April 30:

]… We cannot exclude the chance that some portion of (Progress 59) structure, for example the heavy docking mechanism or tanks and thrusters, could survive reentry to reach the surface. 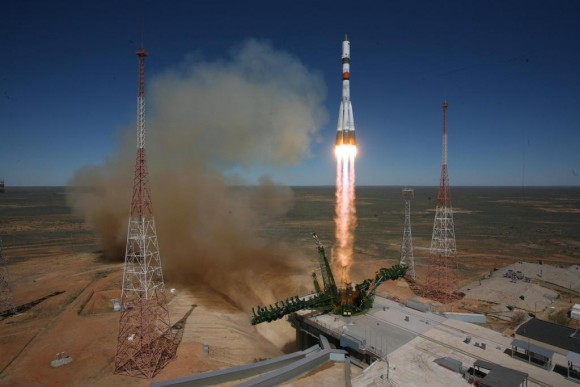 The Progress 59 spacecraft was launched from Kazakhstan on April 28 and was heading to the International Space Station (ISS) with food, fuel and supplies. An unexpected incident occurred during the spacecraft separation, and video sent back by the spacecraft showed it was spinning out of control.

Russian officials declared on April 29 that they were unable to regain the spacecraft control. It was clear that the doomed spacecraft would return fall back into Earth’s atmosphere. 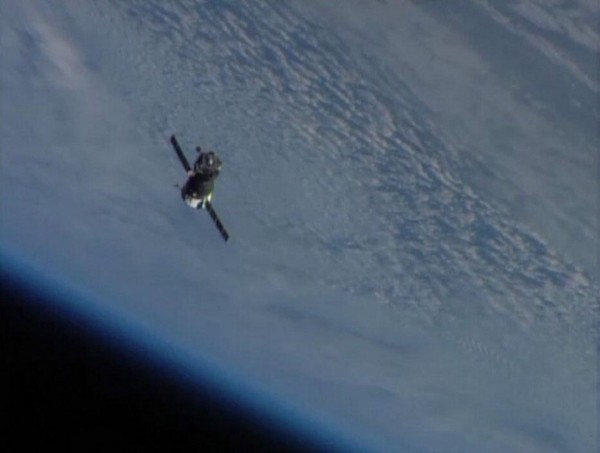 Progress is a series of unmanned cargo craft used to resupply the International Space Station.

What observers might have seen when the spacecraft re-entered. The Russian cargo spacecraft was expected to disintegrate around May 8, as soon as it entered the densest part of our atmosphere, about 70 – 75 miles (112-120 km) high.

A disintegrating spacecraft will look like a spectacular meteor, or fiery streak, across Earth’s sky. It might be visible in daytime. One way of identifying it as a possible manmade object, and not a natural meteor, is that reentering manmade objects appear considerably slower upon reentry than natural space rocks. The re-entry might appear slow enough to allow pictures or video, something that usually is very difficult with much faster natural meteors. However, Progress 59’s reentry over the Pacific makes this unlikely.

Also, reentering spacecraft have shown significant fragmentation. It is possible to see chunks – possibly in varying colors – creating bursts of light as they fly off the main meteor.

A reentry trajectory from southwest to northeast – as well as from northwest to southeast – was consistent with the orbit of this type of spacecraft.

Before the Progress vehicle reentered the atmosphere, the spacecraft might have been visible to the unaided eye from some locations as it was still orbiting Earth. Remember that orbiting objects and satellites appear as slowly “moving stars” in our sky. During the last hours of the Progress M-27M / 59P mission, the craft would appear to move somewhat faster than other satellites – faster than the apparent speed of ISS – because observers would be looking at an object that is more than twice as close as other orbiting objects.

While still in orbit, Progress 59 was expected to show show variations of brightness, which would confirm the object was tumbling in space and thus reflecting sunlight intermittently.

If you did see a slow and bright, fragmenting “meteor” as described here, please share your sighting reports and location in the comments below, or visit EarthSky communities on Facebook, Twitter or Google+.

Normally, after delivering its cargo to the ISS, Progress spacecraft would be undocked from the orbital laboratory and then a command is sent to purposely send it to reenter the atmosphere and disintegrate over the South Pacific area, so that any surviving debris would not pose a danger to populated areas.

According to NASA, by the way, the ISS crew is not in danger of running out of food or supplies. SpaceX already had a scheduled launch to bring more supplies to the ISS on June 19. 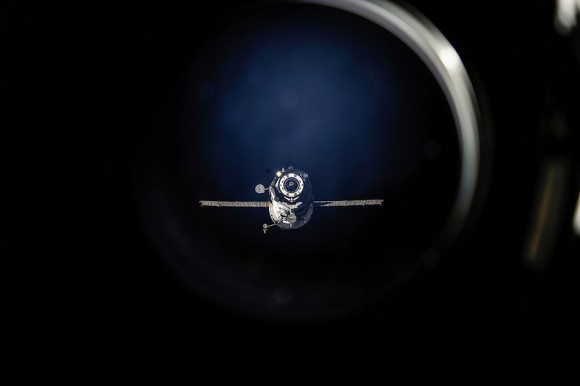 Bottom line: A Progress 59 re-supply craft, launched from Kazakhstan on April 28, quickly lost control. It has now fallen from space, over the Pacific.