Venus and Jupiter are converging for a must-see close encounter at the end of June. It could be the best backyard sky show of 2015.

Throughout the month of June 2015, the two brightest planets in the night sky, Venus and Jupiter, are converging for a jaw-dropping close encounter.

When the sun goes down, step outside and look west. You don’t have to wait until the sky fades to black. Venus and Jupiter are so bright, you can see then shining through the twilight.

During the first two weeks of June, Venus and Jupiter converged until they’re now are only about 10 degrees apart. For reference, this means they would just fit together inside the bowl of the Big Dipper. You could hide them both, simultaneously, behind the palm of your outstretched hand.

This is pretty close, but by the end of the month this distance will shrink by a factor of 30. In fact, every night in June, the separation between Venus and Jupiter will visibly shrink.

On June 18, Venus and Jupiter will be only 6 degrees apart. Now you can hide the two behind just two or three of your fingers with your arm outstretched. 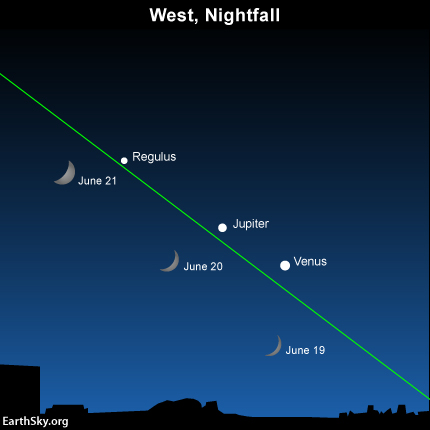 Watch for the moon to move up past the bright planets Venus and Jupiter – and the star Regulus in the constellation Leo the Lion – from June 19 to 21. See more charts and read more about the moon passing Venus and Jupiter.

On June 19, something exciting happens: the crescent moon joins the show. On that evening, the moon, Venus and Jupiter will form a bright isosceles triangle in the sunset sky. Isosceles means that two sides of the triangle are the same length. This is how most sky watchers in North America will see it.

One night later, on June 20, the vertices rearrange themselves, forming yet another isosceles triangle.

The nights of June 19 and 20, by the way, are good nights to look through a telescope. Even a small telescope will show you the fat crescent phase of Venus, the cloudtops and largest moons of Jupiter, and the rugged terrain of Earth’s own moon. Swing your optics around the triangle for a fast-paced heavenly show.

The main event occurs on June 30. On that night, Venus and Jupiter will be a jaw-dropping 1/3rd of a degree apart. That’s less than the diameter of a full moon. You’ll be able to hide the pair not just behind the palm of your outstretched hand, but behind your little pinky finger.

Bottom line: Throughout the month of June 2015, the two brightest planets in the night sky, Venus and Jupiter, are converging for a jaw-dropping close encounter on June 30.