Does dark matter exist in our sun’s neighborhood?

Astronomers have grown convinced over decades that dark matter exists on the large scale of our universe. But what about our neighborhood of space?

But what about our local area of space – the immediate vicinity in the neighborhood of our sun? Do astronomers know of dark matter that exists nearby? 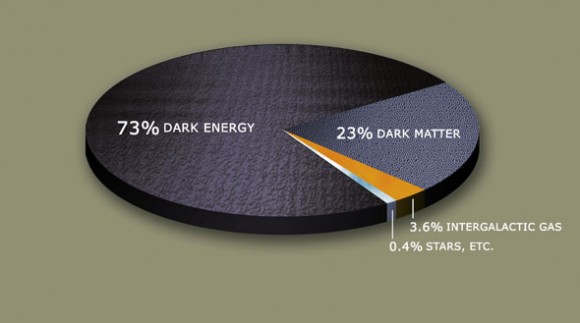 Astronomers use the idea of dark matter to account for a substantial portion of the mass of our universe. An even greater amount of mass, they believe, is taken up with dark energy. Meanwhile, the visible stars and galaxies we see around us in space may be only a small part of the whole universe. Image via Wikimedia Commons.

When we speak of dark matter, we’re often speaking on a grand scale – the scale of our galaxy at least – and often the scale of the whole universe. But experts have been less sure how much dark matter there is in the neighborhood of our own Earth and sun. However, in 2012, European and Chinese astronomers said they found large amounts of dark matter near our sun.

These astronomers developed a new way of measuring mass. They tested their technique first on a state-of-the-art simulation of our galaxy. The results suggested that, in the past, scientists have been underestimating the amount of dark matter in space. So the team adjusted their technique – and then applied it to real data – in this case, the known positions and velocities of thousands of orange dwarf stars near our sun.

Their work showed that dark matter almost definitely does exist – invisibly – in our sun’s vicinity.

Read more about this work from the Royal Astronomical Society 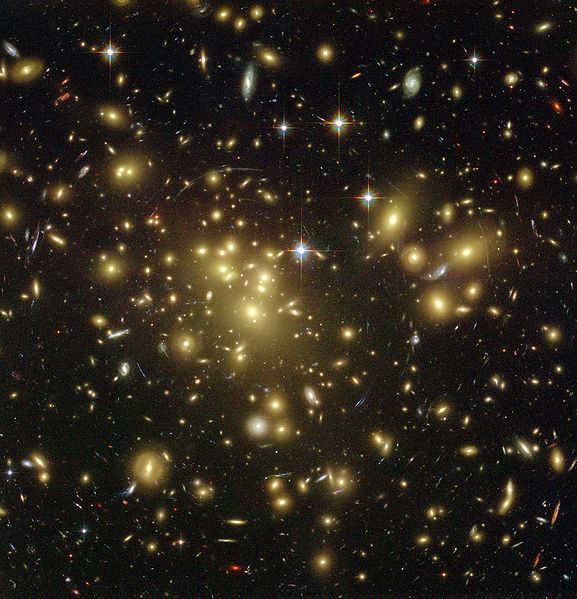 Strong gravitational lensing as observed by the Hubble Space Telescope in Abell 1689 indicates the presence of dark matter. This is just one piece of evidence – among many collected over decades – that dark matter exists on the large scale of our universe. Image via Wikipedia.

Bottom line: Astronomers have grown convinced over decades that dark matter exists on the large scale of our galaxy and universe. In 2012, astronomers in Europe and China found evidence for dark matter in the space near our sun.