Does dark matter cause mass extinctions?

As we journey around the galaxy, our solar system might regularly interact with dark matter, which might dislodge Oort cloud comets and boost heat in Earth’s core. 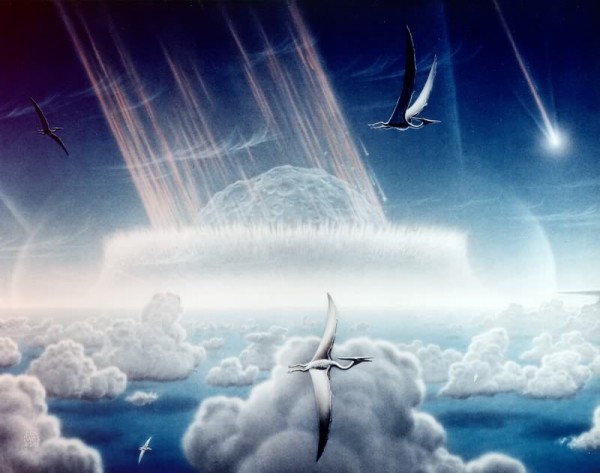 Does dark matter play a role in space impacts, such as the one that may have killed the dinosaurs approximately 66 million years ago? This painting is by space artist Don Davis via Wikimedia Commons.

Overall, dark matter is thought to contribute 23 percent of all the mass in the universe. Another 73 percent is dark energy, which leaves only 4 percent of the universe composed of regular matter, such as stars, planets and people. Pie chart via NASA

Earth detectors haven’t yet directly detected dark matter. We know it’s there only because dark matter interacts, gravitationally, with visible matter and radiation. Modern theories suggests that dark matter makes up a substantial portion of the mass of our universe, and the inner part of our galaxy, where our solar system resides, is thought to contain dark matter. This month – in a paper published February 18, 2015 in the Monthly Notices of the Royal Astronomical Society – a New York University (NYU) professor cites dark matter as the cause for earthly catastrophes, specifically mass extinctions and geologic upheavals. The idea seems far-fetched, but has an easy-to-visualize logic behind it.

NYU Earth scientist Michael Rampino conducted the recent study, at whose heart lies astronomer’s ideas about our sun’s motion through our Milky Way galaxy. The sun is thought to orbit the center of the Milky Way once about every 250 million years. As it journeys through this vast cosmic year, our sun and solar system also move up and down through the crowded galactic disk, in a cyclical weaving motion that lasts about 30 million years.

Rampino noted as early as 1984 that the pattern of the Earth’s oscillating motion through the galactic disk seems to correlate with mass extinctions, the most famous of which took place about 66 million years ago, wiping out the dinosaurs. With his most recent study, he continues to conclude that this motion of our solar system through the galaxy might disturb the Oort comet cloud and:

…produce periodic comet showers and extinctions on the Earth.

But there’s more to his recent study as well. Rampino told EarthSky in an email:

The main difference in my recent article is the proposal that dark matter does more than just disturbing the Oort comet cloud (as we proposed in 1984). I suggest, based on the properties of dark matter, that the dark matter can be captured by the Earth, travel to the Earth’s core, and when the number of [dark matter particles] is high enough, the particles will annihilate each other, and release large amounts of heat.

Approximately every 30 million years, when we pass through the thin disk of dark matter in the galactic plane … the capture of dark matter will lead to internal Earth heating and therefore volcanism, tectonic upheavals, changes in sea level and climate, and changes in the Earth’s magnetic field.

Rampino’s 1984 paper, published in the journal Nature, singled out “intermediate-sized to large-sized interstellar clouds of gas and dust … concentrated towards the galactic plane” as a possible cause of mass extinction events. As he wrote in 1984:

… a nearby interstellar cloud would gravitationally perturb the solar system’s family of comets and thereby increase the flux of comets and comet-derived bodies near the Earth, leading to large-body impacts.

More recently, though, other scientists have elaborated on Rampino’s original idea to include the idea of dark matter. A study in March, 2014 by theoretical physicists Lisa Randall and Matthew Reece of Harvard University called out dark matter as the source of periodic Oort cloud perturbations. Here’s a preprint of Randall and Reece’s paper, which appeared in Physical Review Letters.

Dark matter does interact gravitationally. That’s one reason we know it exists. Past studies could not account for a gravitational force from dark matter in our galaxy strong enough to perturb comets in the Oort cloud. But Randall and Reece showed that a thin disk of dark matter in the galactic plane could do exactly that, causing comet storms about every 35 million years. 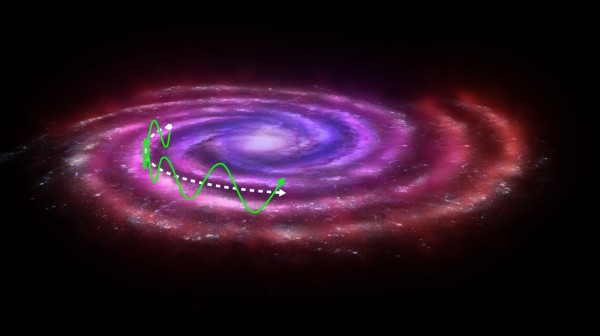 Illustration of sun’s oscillating motion – up and down – as it moves in orbit around the center of the galaxy, via Elizabeth Gibney’s report on Randall and Reece’s study in Nature: Did Dark Matter Kill the Dinosaurs?

Rampino says Earth’s cyclical movement through the invisible, thin disk of dark matter in the Milky Way might not only perturb the orbits of distant comets but also lead to additional heating in the Earth’s core. Both cometary impacts – and mega-eruptions of volcanos – have been suggested as being connected with the periodic mass extinction known to have taken place on Earth.

Rampino said in a statement:

We are fortunate enough to live on a planet that is ideal for the development of complex life. But the history of the Earth is punctuated by large scale extinction events, some of which we struggle to explain. It may be that dark matter – the nature of which is still unclear but which makes up around a quarter of the universe – holds the answer. As well as being important on the largest scales, dark matter may have a direct influence on life on Earth.

Bottom line: A study by NYU professor Michael Rampino – published in February, 2015 – suggests that as our sun journeys around the galaxy – in the 250-million-year cycle known as a “cosmic year,” our solar system might regularly interact with dark matter, which might in turn dislodge Oort cloud comets and boost heat in Earth’s core, possibly causing mass extinctions.