What are ring galaxies?

How does a ring-shaped galaxy form? It might result from an impact with another galaxy slamming into its center. 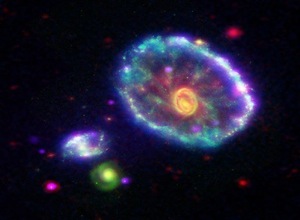 Located some 400 million light-years away, the Cartwheel galaxy is what’s known as a ring galaxy.

Through telescopes or in astro photos, you’d see the Cartwheel with its brightest stars in a ring orbiting the galaxy’s center. Ring galaxies are rare, and astronomers have tried to figure out how they form. One idea is that they start out as spiral galaxies – like our own Milky Way – until a small intruder galaxy smashes into the spiral’s center. Like a pebble falling into a pond, the intruder’s gravity stimulates a wave of star birth in the larger spiral galaxy’s disk. This wave is thought to expand outward to create a ring galaxy.

A 2008 study from Europe suggests a further evolution for ring galaxies like the Cartwheel. Michela Mapelli at the University of Zurich in Switzerland and her team used a computer to simulate the possibility that, as the ring galaxy expands over aeons of time, it grows extremely large and diffuse. Eventually, it might resemble another type of galaxy, known to astronomers as giant galaxies with what they call a low-surface-brightness.

In other words, the stars are spread out, so that the galaxy looks ghostly. An example of a low-surface brightness galaxy is Malin 1 – first seen in the 1980s – currently the largest known spiral galaxy in the universe. So you can picture it – a large spiral galaxy colliding with a smaller galaxy – forming a majestic ring in space which later spreads out. If it’s true, then all three sorts of galaxies – spiral, ring, large and diffuse – are like snapshots in a family album – all related.