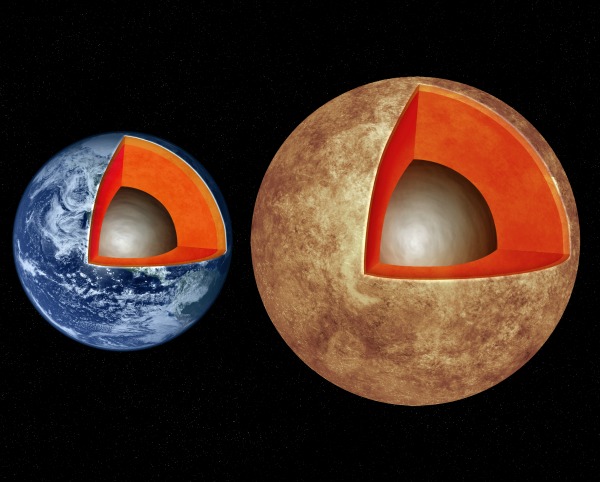 This artist’s illustration compares the interior structures of Earth (left) with the exoplanet Kepler-93b (right), which is one and a half times the size of Earth and 4 times as massive. New research suggests that rocky worlds share similar structures, with a core containing about a third of the planet’s mass, surrounded by a mantle and topped by a thin crust. Image credit: M. Weiss/CfA

Li Zeng of the Harvard-Smithsonian Center for Astrophysics (CfA) is the lead author of the paper, accepted for publication in The Astrophysical Journal and published online on February 4, 2016. Zeng said:

We wanted to see how Earth-like these rocky planets are. It turns out they are very Earth-like.

To reach this conclusion Zeng and his co-authors applied a computer model known as the Preliminary Reference Earth Model (PREM), which is the standard model for Earth’s interior. They adjusted it to accommodate different masses and compositions, and applied it to six known rocky exoplanets with well-measured masses and physical sizes.

They found that the other planets, despite their differences from Earth, all should have a nickel/iron core containing about 30 percent of the planet’s mass. In comparison, about a third of the Earth’s mass is in its core. The remainder of each planet would be mantle and crust, just as with Earth. Zeng said:

We’ve only understood the Earth’s structure for the past hundred years. Now we can calculate the structures of planets orbiting other stars, even though we can’t visit them.

The new code also can be applied to smaller, icier worlds like the moons and dwarf planets in the outer solar system. For example, by plugging in the mass and size of Pluto, the team finds that Pluto is about one-third ice (mostly water ice but also ammonia and methane ices).

The model assumes that distant exoplanets have chemical compositions similar to Earth. This is reasonable, the researchers say, based on the relevant abundances of key chemical elements like iron, magnesium, silicon, and oxygen in nearby systems. However, planets forming in more or less metal-rich regions of the galaxy could show different interior structures.

Bottom line: New research published online on February 4, 2016 suggests that rocky exoplanets have interiors very similar to Earth’s, with a thin outer crust, a thick mantle, and a Mars-sized core.

Li Zeng of the Harvard-Smithsonian Center for Astrophysics (CfA) is the lead author of the paper, accepted for publication in The Astrophysical Journal and published online . Zeng said: