Were it possible to see the skies from this world, the four parent stars would look like one small sun and two very bright stars visible in the daylight. 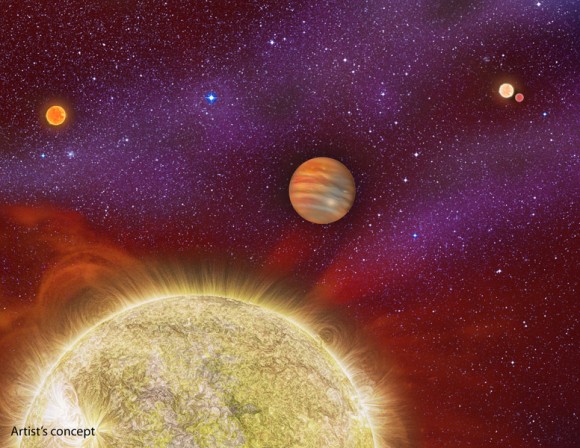 This artist’s conception shows the 30 Ari system, which includes four stars and a planet. The planet, a gas giant, orbits its primary star (yellow) in about a year’s time. Image copyright: Karen Teramura, UH IfA

Astronomers have discovered the second known case of a planet residing in a quadruple star system – that is, a planet with four suns. The newfound four-star planetary system, called 30 Ari, is located 136 light-years away in the constellation Aries. The new findings were published in the Astronomical Journal in March, 2015.

Although the planets in our solar system circle just one star – our sun – astronomers have identified dozens of planets in systems with two or even three parent stars. But this is only the second time a planet has been identified in a quadruple star system. While the planet was known before, it was thought to have only three stars, not four.

The 30 Ari’s gaseous planet is enormous, with 10 times the mass of Jupiter, and it orbits its primary star every 335 days. The primary star has a relatively close partner star, which the planet does not orbit. This pair, in turn, is locked in a long-distance orbit with another pair of stars about 1,670 astronomical units away (an astronomical unit is the distance between Earth and the sun). Astronomers think it’s highly unlikely that this planet, or any moons that might circle it, could sustain life.

Were it possible to see the skies from this world, the four parent stars would look like one small sun and two very bright stars that would be visible in daylight. One of those stars, if viewed with a large enough telescope, would be revealed to be a binary system, or two stars orbiting each other.

In recent years, dozens of planets with two or three parent stars have been found, including those with “Tatooine” sunsets reminiscent of the Star Wars movies. Finding planets with multiple parents isn’t too much of a surprise, considering that binary stars are more common in our galaxy than single stars.

The latest discovery suggests that planets in quadruple star systems might be less rare than once thought. In fact, recent research has shown that this type of star system, which usually consists of two pairs of twin stars slowly circling each other at great distances, is itself more common than previously believed.

Lewis Roberts of JPL is lead author of the study. He said:

The discoveries were made using instruments fitted to telescopes at the Palomar Observatory in San Diego: the Robo-AO adaptive optics system, developed by the Inter-University Center for Astronomy and Astrophysics in India and the California Institute of Technology in Pasadena, and the PALM-3000 adaptive optics system, developed by NASA’s Jet Propulsion Laboratory in Pasadena, California, and Caltech.

Roberts and his colleagues want to understand the effects that multiple parent stars can have on their developing youthful planets. Evidence suggests that stellar companions can influence the fate of planets by changing the planets’ orbits and even triggering some to grow more massive. For example, the “hot Jupiters” – planets around the mass of Jupiter that whip closely around their stars in just days – might be gently nudged closer to their primary parent star by the gravitational hand of a stellar companion.

Bottom line: A study in the Astronomical Journal in March, 2015 describes the second known case of a planet residing in a quadruple star system – that is, a planet with four suns. The newfound four-star planetary system, called 30 Ari, is located 136 light-years away in the constellation Aries.