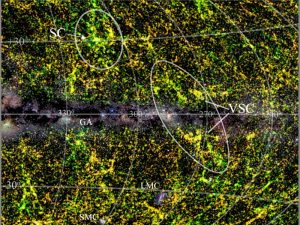 https://www.mpe.mpg.de/6662987/news161116
Image credit: Thomas Jarrett (UCT)/ Max Planck Institute.
The Vela supercluster in its wider surroundings: The image displays the smoothed redshift distribution of galaxies in and around the Vela supercluster (larger ellipse; VSC). The centre of the image, so-called the Zone of Avoidance, is covered by the Milky Way (with its stellar fields and dust layers shown in grey scale), which obscures all structures behind it. Colour indicates the distance ranges of all galaxies within 500 – 1000 million light years (yellow is close to the peak of the Vela supercluster, green is nearer and orange further away). The ellipse marks the approximate extent of the Vela Supercluster, crossing the Galactic Plane. The VSC structure was revealed thanks to the new low latitude spectroscopic redshifts. Given its prominence on either side of the plane of the Milky Way it would be highly unlikely for these cosmic large-scale structures not to be connected across the Galactic Plane. The structure may be similar in aggregate mass to the Shapley Concentration (SC, smaller ellipse), although much more extended. The so-called “Great Attractor” (GA), located much closer to the Milky Way, is an example of a large web structure that crosses the Galactic Plane, although much smaller in extent than VSC. The central, dust-shrouded part of the VSC remains unmapped in the current Vela survey. Also visible are the Milky Way’s two satellite galaxies, LMC and SMC, located south of the Galactic plane.

Thank you! Your submission has been received!
Oops! Something went wrong while submitting the form.
END_OF_DOCUMENT_TOKEN_TO_BE_REPLACED