For the first time, astronomers have obtained an image of the very young gas giant exoplanet Beta Pictoris c, 63 light-years away. Its sibling, Beta Pictoris b, was discovered and photographed in 2008. 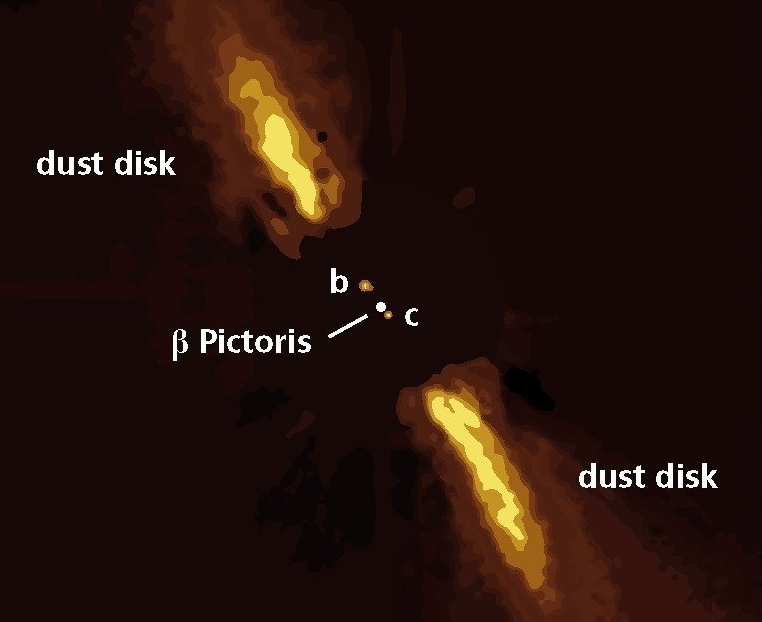 The arrow here points to the star Beta Pictoris. You can also see 2 of its planets, Beta Pictoris b (discovered in 2008) and Beta Pictoris C, now caught via direct imaging for the first time by the the GRAVITY instrument on the Very Large Telescope in Chile. Image via GRAVITY/ Axel M. Quetz/ MPIA Graphics Department/ Science Alert.

In 2008, astronomers discovered an exoplanet orbiting the young star Beta Pictoris. The planet, a gas giant called Beta Pictoris b, was found by direct imaging, a rare feat since most exoplanets are discovered by more indirect methods. Later studies indicated the probable presence of a second planet as well, Beta Pictoris c. But this one was not so easy to photograph … until now. Researchers with the ExoGRAVITY team, led by Mathias Nowak of Selwyn College/ University of Cambridge, have announced the successful imaging of Beta Pictoris c, with some surprises.

The researchers have released their peer-reviewed results in two new papers in Astronomy & Astrophysics, available here and here.

Beta Pictoris is very close to us on a galactic scale, at only 63 light-years away. It is a very young star, estimated to be about 23 million years old, much younger than our 4.6 billion-year-old sun. The two known planets are thought to be 18.5 million years old, still just planetary babies. Since the star is so young, it is still surrounded by a disk of gas and dust, similar to what our own solar system formed out of billions of years ago.

Beta Pictoris c has been calculated to be 8.2 times as massive as Jupiter, and orbits its star every 3.4 years. None of that is too unusual, but then the researchers found something odd. It is really faint, six times fainter than Beta Pictoris b, even though the two planets are of similar size. So why the difference? The team thinks it is because Beta Pictoris c is cooler than its sibling, with an estimated temperature of 1,250 Kelvin (1,791 degrees Fahrenheit or 977 degrees Celsius), compared to 1,724 K (2,644 F or 1,451 C) for Beta Pictoris b. Why the one planet would be a lot cooler than the other isn’t known yet, but it may simply have to do with how the planets formed.

If a forming planet has no core, as in the disk instability formation model – the formation of planets from the breakup of a protoplanetary disk – the it will become hotter and brighter. But if it does have a core, as in the core accretion model – a multi-step formation process involving a heavy element core which forms when small solid dust grains and ices coagulate through collisions into larger particles – then it will be dimmer and cooler. Going by this, the researchers think that Beta Pictoris c formed by core accretion, while Beta Pictoris b may have formed by disc instability. Beta Pictoris c is closer to the star, which also fits the core accretion model. From the second paper:

We suggest that this apparent contradiction is a sign of hot core accretion, for example, due to the mass of the planetary core or the existence of a high-temperature accretion shock during formation.

The exact mass of Beta Pictoris b still isn’t known yet, however, so scientists don’t know for sure how it formed. It is farther out from the star, which would be more consistent with the disk instability model. Its mass can be determined using the radial velocity method – where a planet’s gravity causes its star to wobble slightly – but scientists will need to be patient, as it takes the planet 28 Earth years to complete one orbit. 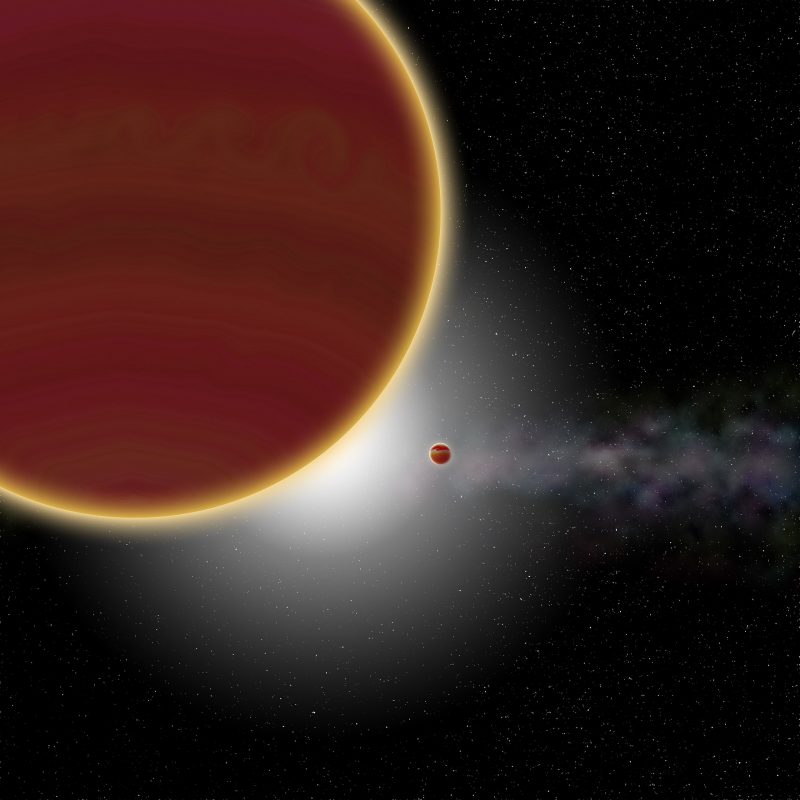 The results obtained so far still provide essential insight into the formation process of such worlds, however. Paul Molliere at the Max Planck Institute for Astronomy (MPIA) said:

We used GRAVITY before to obtain spectra of other directly imaged exoplanets, which themselves already contained hints on their formation process. This brightness measurement of Beta Pictoris c, combined with its mass, is a particularly important step to constraining our planet formation models.

To image Beta Pictoris c, the GRAVITY Collaboration researchers used the GRAVITY instrument on the Very Large Telescope Interferometer (VLTI) in Chile. The technique combined the incoming light from all four telescopes. The planet had first been detected by radial velocity, which measures the drag and pull on the parent star due to the planet’s orbit. GRAVITY was then later able to confirm the planet visually, making Beta Pictoris c the first exoplanet to be detected and confirmed by both methods. Nowak said in a statement:

This means, we can now obtain both the brightness and the mass of this exoplanet. As a general rule, the more massive the planet, the more luminous it is. 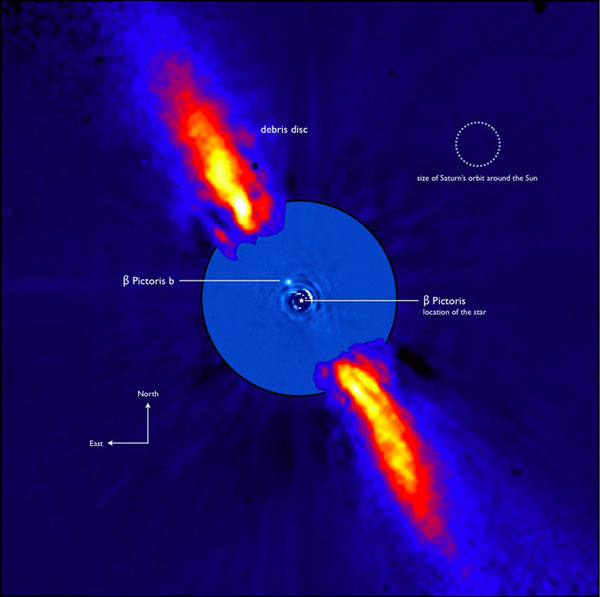 This is the first direct confirmation of a planet detected by the radial velocity method.

The discovery and confirmation of this young world is a fantastic achievement. As Frank Eisenhauer, lead scientist of the GRAVITY project at the Max Planck Institute for Extraterrestrial Physics (MPE), noted:

It is amazing, what level of detail and sensitivity we can achieve with GRAVITY. We are just starting to explore stunning new worlds, from the supermassive black hole at the center of our galaxy to planets outside the solar system.

Next, astronomers want to take spectra of Beta Pictoris c, to find out what its atmosphere is composed of. That should also provide additional clues as to just how the planet formed. 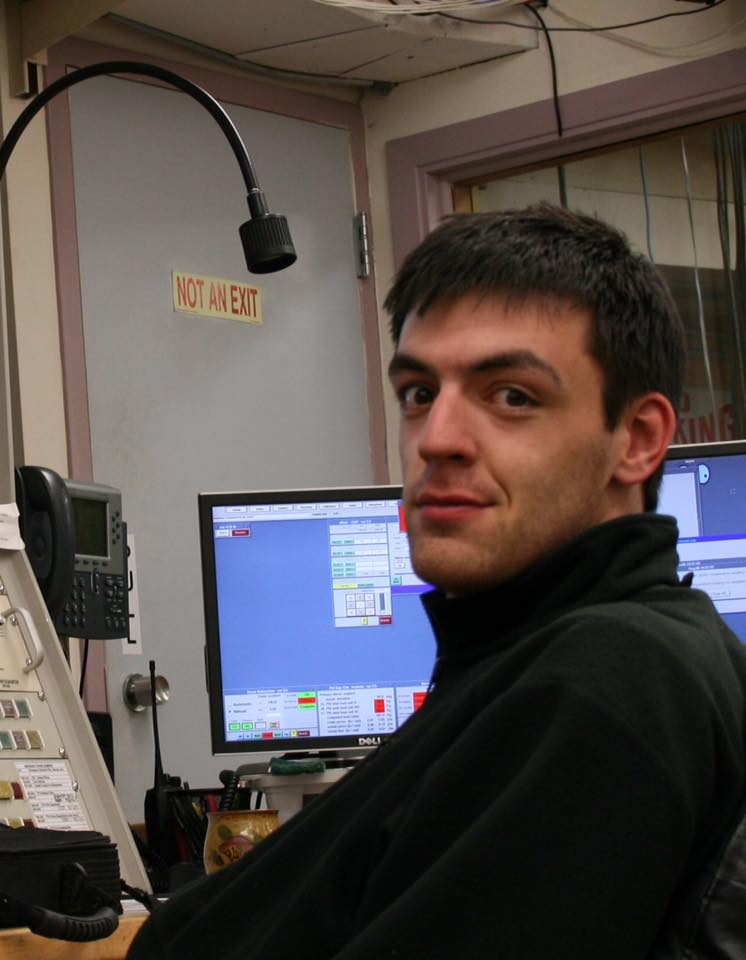 Mathias Nowak at Selwyn College/University of Cambridge, who led the ExoGRAVITY team and is lead author of the first paper. Image via Facebook.

Since both planets are so young and are gas giants instead of rocky worlds, it is very unlikely that they could support life. Learning more about them, however, will still help scientists understand how different kinds of planets form in our galaxy.

Source: Direct confirmation of the radial-velocity planet B Pictoris c