Did vitamin B3 come from space?

Vitamin B3 – a vitamin essential to metabolism – might have been made in space and delivered to Earth by meteorites. 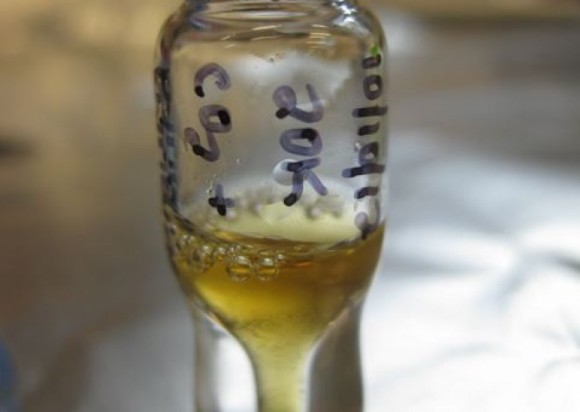 Residue from a laboratory experiment simulating the conditions of interstellar space. The residue contained vitamin B3 (and related compounds) and may help explain meteorite chemistry. Image credit: Karen Smith

Ancient Earth might have had an extraterrestrial supply of vitamin B3 delivered by carbon-rich meteorites, according to a new analysis by NASA-funded researchers. The result supports a theory that the origin of life may have been assisted by a supply of key molecules created in space and brought to Earth by comet and meteor impacts.

“It is always difficult to put a value on the connection between meteorites and the origin of life; for example, earlier work has shown that vitamin B3 could have been produced non-biologically on ancient Earth, but it’s possible that an added source of vitamin B3 could have been helpful,” said Karen Smith of Pennsylvania State University in University Park, Pa. “Vitamin B3, also called nicotinic acid or niacin, is a precursor to NAD (nicotinamide adenine dinucleotide), which is essential to metabolism and likely very ancient in origin.” Smith is lead author of a paper on this research, along with co-authors from NASA’s Goddard Space Flight Center in Greenbelt, Md., now available online in the journal Geochimica et Cosmochimica Acta.

This is not the first time vitamin B3 has been found in meteorites. In 2001 a team led by Sandra Pizzarello of Arizona State University, in Tempe discovered it along with related molecules called pyridine carboxylic acids in the Tagish Lake meteorite.

In the new work at Goddard’s Astrobiology Analytical Laboratory, Smith and her team analyzed samples from eight different carbon-rich meteorites, called “CM-2 type carbonaceous chondrites” and found vitamin B3 at levels ranging from about 30 to 600 parts-per-billion. They also found other pyridine carboxylic acids at similar concentrations and, for the first time, found pyridine dicarboxylic acids.

“We discovered a pattern – less vitamin B3 (and other pyridine carboxylic acids) was found in meteorites that came from asteroids that were more altered by liquid water. One possibility may be that these molecules were destroyed during the prolonged contact with liquid water,” said Smith. “We also performed preliminary laboratory experiments simulating conditions in interstellar space and showed that the synthesis of vitamin B3 and other pyridine carboxylic acids might be possible on ice grains.”

Scientists think the solar system formed when a dense cloud of gas, dust, and ice grains collapsed under its own gravity. Clumps of dust and ice aggregated into comets and asteroids, some of which collided together to form moon-sized objects or planetesimals, and some of those eventually merged to become planets.

Space is filled with radiation from nearby stars as well as from violent events in deep space like exploding stars and black holes devouring matter. This radiation could have powered chemical reactions in the cloud (nebula) that formed the solar system, and some of those reactions may have produced biologically important molecules like vitamin B3.

Asteroids and comets are considered more or less pristine remnants from our solar system’s formation, and many meteorites are prized samples from asteroids that happen to be conveniently delivered to Earth. However, some asteroids are less pristine than others. Asteroids can be altered shortly after they form by chemical reactions in liquid water. As they grow, asteroids incorporate radioactive material present in the solar system nebula. If enough radioactive material accumulates in an asteroid, the heat produced as it decays will be sufficient to melt ice inside the asteroid. Researchers can determine how much an asteroid was altered by water by examining chemical and mineralogical signatures of water alteration in meteorites from those asteroids.

When asteroids collide with meteoroids or other asteroids, pieces break off and some of them eventually make their way to Earth as meteorites. Although meteorites are valued samples from asteroids, they are rarely recovered immediately after they fall to Earth. This leaves them vulnerable to contamination from terrestrial chemistry and life.

The team doubts the vitamin B3 and other molecules found in their meteorites came from terrestrial life for two reasons. First, the vitamin B3 was found along with its structural isomers – related molecules that have the same chemical formula but whose atoms are attached in a different order. These other molecules aren’t used by life. Non-biological chemistry tends to produce a wide variety of molecules — basically everything permitted by the materials and conditions present — but life makes only the molecules it needs. If contamination from terrestrial life was the source of the vitamin B3 in the meteorites, then only the vitamin should have been found, not the other, related molecules.

Second, the amount of vitamin B3 found was related to how much the parent asteroids had been altered by water. This correlation with conditions on the asteroids would be unlikely if the vitamin came from contamination on Earth.

The team plans to conduct additional interstellar chemistry experiments under more realistic conditions to better understand how vitamin B3 can form on ice grains in space. “We used pyridine-carbon dioxide ice in the initial experiment,” said Smith. “We want to add water ice (the dominant component of interstellar ices) and start from simpler organic precursors (building-block molecules) of vitamin B3 to help verify our result.”