Did huge volcanoes lead to oceans on Mars?

A new study links oceans on ancient Mars to the rise of the planet’s Tharsis volcano system, home to the largest volcanoes in our solar system. 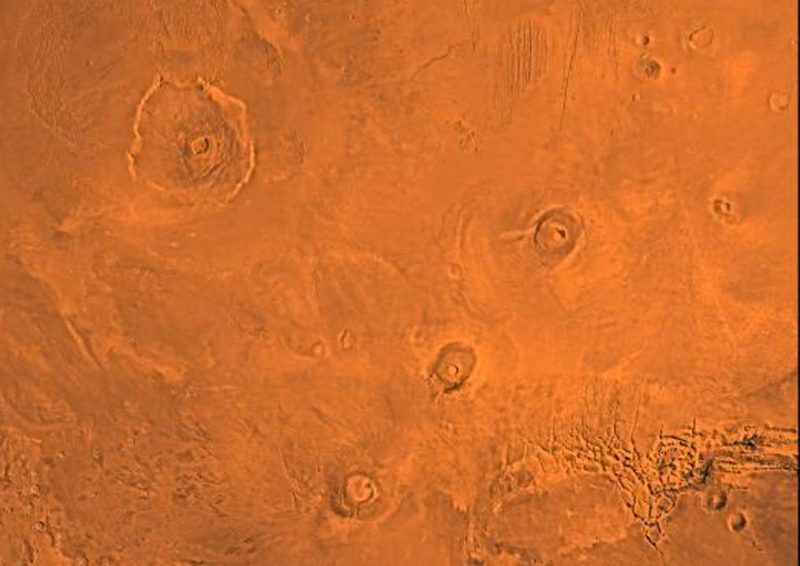 A new study suggests oceans on Mars were shallower and formed several hundred million years earlier than thought, and links their existence to the rise of the planet’s Tharsis volcano system.

Tharsis is a vast volcanic plateau centered near the equator in Mars’ western hemisphere. The region is home to the largest volcanoes in our solar system.

Michael Manga, a University of California, Berkeley professor of earth and planetary science, is senior author of the paper, published Monday (March 19, 2018) in the journal Nature. Manga said in a statement:

Volcanoes may be important in creating the conditions for Mars to be wet. 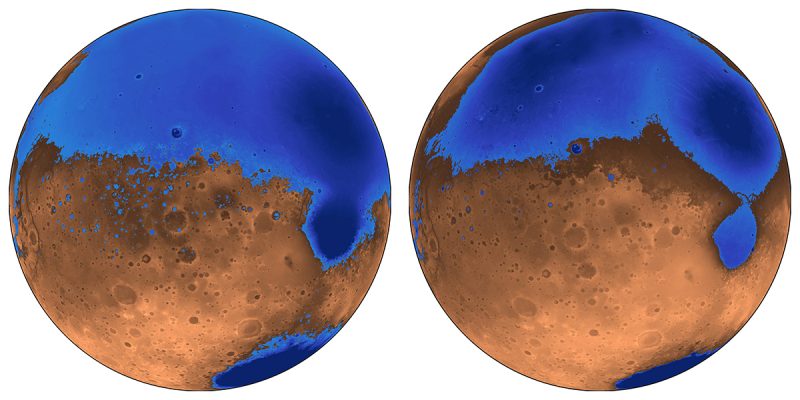 The early ocean known as Arabia (left, blue) would have looked like this when it formed 4 billion years ago on Mars, while the Deuteronilus ocean, about 3.6 billion years old, had a smaller shoreline. Both coexisted with the massive volcanic province Tharsis, located on the unseen side of the planet, which may have helped support the existence of liquid water. The water is now gone, perhaps frozen underground and partially lost to space, while the ancient seabed is known as the northern plains. Image via Robert Citron/UC Berkeley.

Those who adhere to the theory that Mars never had oceans of liquid water often point out that estimates of the size of the oceans don’t jibe with estimates of how much water could be hidden on Mars today as permafrost underground, and how much could have escaped into space. These are the main options, scientists say, given that the polar ice caps don’t contain enough water to fill an ocean.

The new study proposes that the oceans formed before or at the same time as Mars’ largest volcanic feature, Tharsis, instead of after the volcanic system formed 3.7 billion years ago.

According to the study, Tharsis was smaller at that time, so it didn’t distort the planet as much as it did later – in particular the plains that cover most of the northern hemisphere and are the presumed ancient seabed.

The researchers say that the absence of crustal deformation from Tharsis means the seas would have been shallower, holding about half the water of earlier estimates. Manga said:

The assumption was that Tharsis formed quickly and early, rather than gradually, and that the oceans came later. We’re saying that the oceans predate and accompany the lava outpourings that made Tharsis.

Tharsis, now a 3,000-mile-wide (5,000 km) eruptive complex, dominates the topography of Mars. Earth, which is twice the diameter and 10 times more massive than Mars, has no equivalent dominating feature. Tharsis’ bulk creates a bulge on the opposite side of the planet and a depression halfway between. This explains why estimates of the volume of water the northern plains could hold based on today’s topography are twice what the new study estimates based on the topography 4 billion years ago.

The scientists suggest that Tharsis spewed gases into the atmosphere that created a global warming or greenhouse effect that allowed liquid water to exist on the planet, and also that volcanic eruptions created channels that allowed underground water to reach the surface and fill the northern plains. 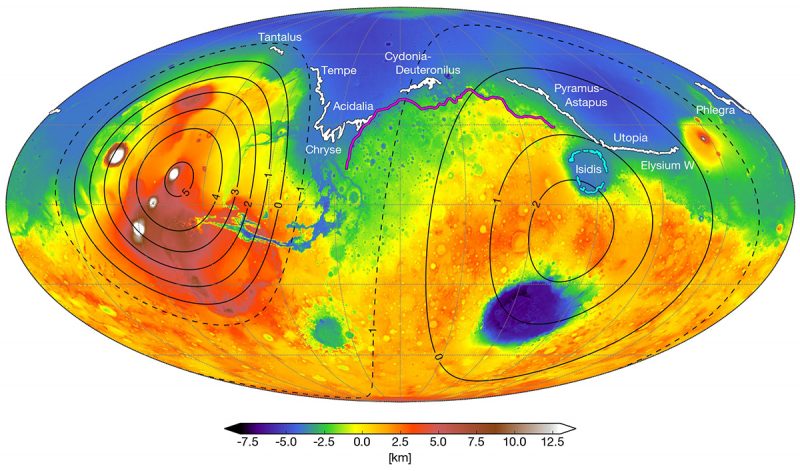 A map of Mars today shows where scientists have identified possible ancient shoreline that may have been etched by intermittent oceans billions of years ago. The new study counters another argument against Mars oceans: that the proposed shorelines are irregular, varying in height by as much as a kilometer, when they should be level, like shorelines on Earth. The study says the irregular elevations of these shorelines can be explained by the growth of the volcanic province called Tharsis some 3.7 billion years ago, which would have deformed the topography and misaligned the shorelines. Arabia (magenta) is more than 4 billion years old, while the Deuteronilus (white) and Isidis (cyan) shoreline are several million years younger. The solid contour lines represent the Tharsis bulge (left) and the antipodal bulge it created (right), with dashed contour lines indicating the depressions in between. Image via Robert Citron/UC Berkeley.

Bottom line: A new study links water oceans on ancient Mars to the rise of the planet’s Tharsis volcano system.