Did ancient Mars have rings?

A new study of Mars’ smallest moon Deimos, by scientists from the SETI Institute and Purdue University, suggests that the planet used to have rings a few billion years ago. 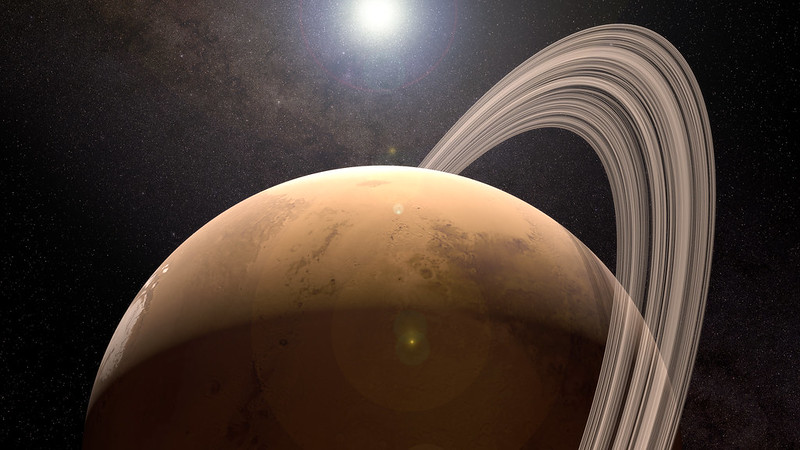 Artist’s concept of the red planet Mars with rings. Image via Kevin Gill on Flickr/ CC by 2.0.

Ring systems are common in our solar system. Jupiter, Saturn, Uranus and Neptune all have rings. None of the smaller rocky planets have them, but is it possible that some of them could have had rings in the past? On June 2, 2020, scientists from the SETI Institute and Purdue University announced evidence suggesting that Mars used to have its own rings a few billion years ago. The findings would help explain why Mars’ smallest moon, Deimos, has an unusually tilted orbit.

The researchers published the new peer-reviewed paper in Astrophysical Journal Letters on June 1, 2020. The research was also presented at the 236th Meeting of the American Astronomical Society (AAS 236), held virtually this week (June 1-3, 2020) due to COVID-19.

While the orbits of both small moons, Phobos and Deimos, lie almost in the same plane as Mars’ equator – suggesting they formed at the same time as Mars – Deimos’ orbit is tilted by about 2 degrees. This tilt was an unusual and unexplained finding. It was also considered to be not all that significant in terms of Mars science.

Now it seems that, all along, that small anomaly – the 2-degree tilt of Deimos’ orbit with respect to Mars’ equator – held a clue to something very interesting about the red planet’s past … that Mars used to have rings! 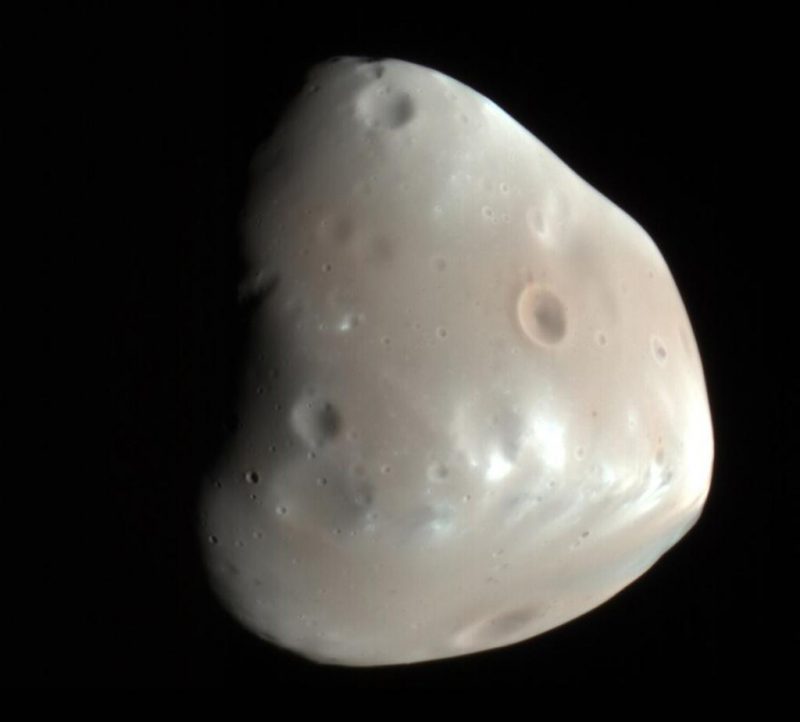 Mars’ smallest moon, Deimos, as seen by the Mars Reconnaissance Orbiter spacecraft on February 21, 2009. The tilted orbit of the moon hints at ancient ring system around Mars. Image via NASA/ JPL-Caltech/ University of Arizona/ SETI Institute.

Lead author Matija Cuk at the SETI Institute explained in a statement:

The fact that Deimos’s orbit is not exactly in plane with Mars’s equator was considered unimportant, and nobody cared to try to explain it. But once we had a big new idea and we looked at it with new eyes, Deimos’s orbital tilt revealed its big secret.

Three years ago, scientists suggested that the larger of Mars’ two tiny moons – Phobos – might periodically create a ring system for Mars. In that scenario, Mars has had a series of rings, appearing in cycles over billions of years, and it will have rings again in the future. It happens because – for example, at present – Phobos is slowly orbiting closer and closer to Mars. Eventually, Mars’ gravity will rip Photos apart and the fabric of the moon’s body will form a ring. Later, the material in the ring will coalesce to form a moon again. The researchers think that this has happened many times over Mars’ history. The new paper on a Mars ring from the other moon, Deimos, speaks to this alternate theory:

Alternatively, Hesselbrock & Minton (2017) propose that Phobos is only the latest product of a repeating ring-satellite cycle at Mars, with each successive inner satellite being less massive than the preceding one. In the ring-satellite cycle model, satellites form from the outer edge of the ring, and then migrate outward through gravitational interaction with the ring. The ring loses mass to the planet at its inner edge, and once the ring is sufficiently depleted the satellite migrates inward due to tides.

How does this earlier idea relate to the new scenario involving Deimos?

According to the researchers, a newborn moon would move away from both the ring and Mars, heading in the opposite direction from Phobos, or any inwardly-migrating moon. An outwardly-migrating moon, just outside of the rings, could come to experience an orbital resonance – a situation where two orbiting bodies are exerting a regular, periodic gravitational influence on each other – so that the orbital period of Deimos comes to be precisely three times that of the other moon. The researchers’ statement explained:

These orbital resonances are picky but predictable … We can tell that only an outward-moving moon could have strongly affected Deimos, which means that Mars must have had a ring pushing the inner moon outward. Cuk and collaborators deduce that this moon may have been 20 times as massive as Phobos, and may have been its ‘grandparent’ existing just over 3 billion years ago … [that] was followed by two more ring-moon cycles, with the latest moon being Phobos. 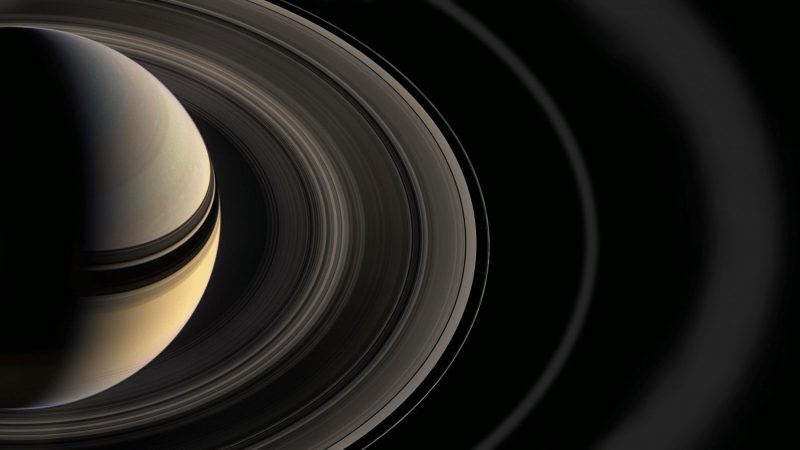 Saturn, of course, has the most well-known rings in the solar system, as seen here by the Cassini spacecraft. Image via NASA/ JPL-Caltech.

The formation of Phobos probably happened about 3 1/2 billion years ago, Cuk told ScienceAlert:

Something like 3.5 billion years ago is our best bet. That agrees beautifully with Hesselbrock and Minton’s calculation on when Mars had an inner moon with 20 times the mass of Phobos. Once the ring was gone, the moon also started falling because of Martian tides (just like Phobos). Once it was too close to Mars, tidal forces would pull it apart into a new ring, and the cycle would repeat, probably twice, to get to Phobos that we see.

The findings are fascinating since they imply that Mars has had at least one prominent ring, and probably more, during its lifetime. This would mean that smaller rocky planets can also have rings, although none of those in our current solar system do.

On the other hand, scientists know that the ring process must be a common one in our solar system. 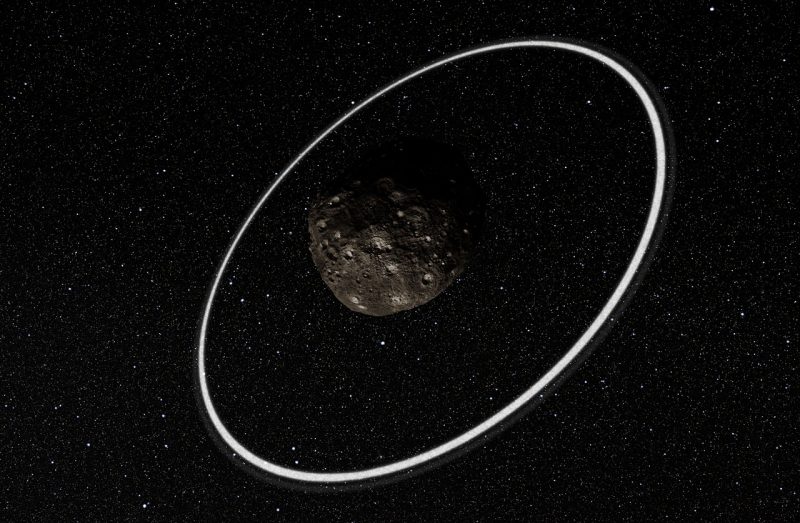 Artist’s concept of asteroid Chariklo, which, in 2014, was the first object in the solar system smaller than the gas or ice giant planets found to have rings. Image via ESO.

They know that because Jupiter, Saturn, Uranus and Neptune all are known to have rings. And, in 2014, astronomers discovered an asteroid – named Chariklo – with two dense and narrow rings. This was the first time that rings were found around any solar system object smaller than the gas or ice giant planets. Chariklo is a member of a group of asteroids called Centaurs that orbit between Jupiter and Neptune. Uffe Gråe Jørgensen at Niels Bohr Institute, University of Copenhagen in Denmark, said of Chariklo:

For me, it was quite amazing to realize that we were able not only to detect a ring system, but also pinpoint that it consists of two clearly distinct rings. I try to imagine how it would be to stand on the surface of this icy object – small enough that a fast sports car could reach escape velocity and drive off into space – and stare up at a 20-kilometer (12-mile) wide ring system 1,000 times closer than the moon.

In 2017, a ring was also discovered around the asteroid-like dwarf planet Haumea, which orbits beyond Neptune in the Kuiper Belt. 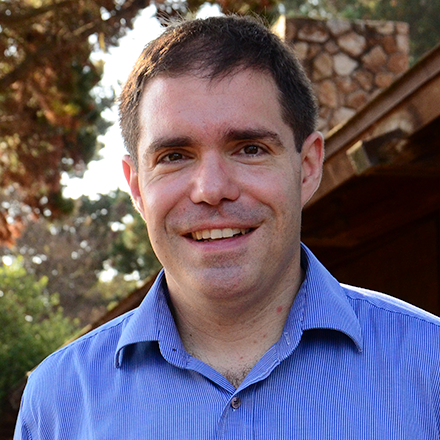 The Japanese space agency JAXA is planning to send a new mission to Phobos in 2024, which will collect samples for return to Earth. This will hopefully provide more clues about Mars’ rings and the previous larger moon that Phobos came from. Cuk said:

I do theoretical calculations for a living, and they are good, but getting them tested against the real world now and then is even better.

It would be really cool if we could go back in time and see the rings of Mars as they once were. But, we can still learn about them by studying the clues left behind in the planet’s two remaining little moons, Deimos and Phobos.

Bottom line: A new research study of Mars’ smallest moon Deimos suggests that the planet used to have a ring or rings a few billion years ago.

Source: Evidence for a Past Martian Ring from the Orbital Inclination of Deimos