“For the first time, we are not only visualizing the detailed structure of our Local Supercluster of galaxies, but we are also seeing how the structure developed over the history of the universe.”

Action Dynamics of the Local Supercluster
by Daniel Pomarede
on Sketchfab

If you click play on the interactive above, you’ll see the motions of galaxies in our local supercluster, from 13 billion years ago to the present day.

Where’s our home galaxy, the Milky Way, in this interactive? Look below at the still graphic, for the yellow letters marked MW. Our Milky Way is part of what’s called the Local Group, which spans about 10 million light-years and contains several dozen galaxies. The Local Group, in turn, is part of the Virgo Supercluster, which spans just over 100 million light-years and is thought to contain at least 100 galaxy groups and clusters. The interactive above is part of a study by a team of astronomers from Maryland, Hawaii, Israel, and France. They say it’s the most detailed map ever of the orbits of galaxies in our extended local neighborhood. It shows the past motions of some 1,400 galaxies within 100 million light-years of our Milky Way.

The study called Action Dynamics of the Local Supercluster. It’s published in the December 4, 2017 issue of the peer-reviewed Astrophysical Journal. 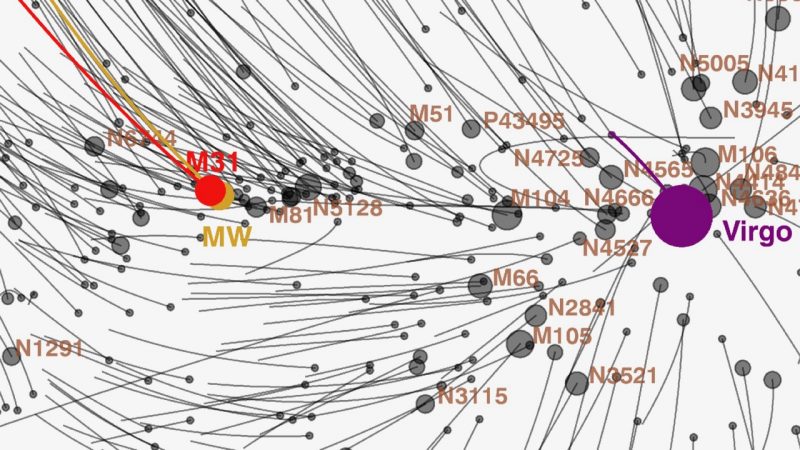 Our home Milky Way galaxy (MW, yellow) and our companion Andromeda galaxy (M31, red) are participating in a downward flow away from a vast underdense region called the Local Void and toward the Virgo Cluster, represented by the large purple dot in this image. Most galaxies between us and the Virgo Cluster will eventually fall into the cluster but we lie slightly beyond the capture zone. Image via R. Brent Tully/ Institute for Astronomy.

In the interactive, you’ll notice the galaxies are moving toward something, a gravitational attractor represented by the big red dot more or less in the center of the mapped area (and in purple in the still graphic just above). This attractor is the Virgo Cluster, a large cluster of galaxies at the heart of the Virgo Supercluster (all located in the direction to the constellation Virgo in our sky; hence their names).

Over a thousand galaxies have already fallen into the Virgo Cluster, while in the future all galaxies that are currently within 40 million light-years of the cluster will be captured. Our Milky Way galaxy lies just outside this capture zone. However the Milky Way and Andromeda galaxies, each with 2 trillion times the mass of the sun, are destined to collide and merge [with each other] in 5 billion years.

With the interactive model, a viewer can pan, zoom, rotate, and pause/activate the time evolution of movement along orbits. The orbits are shown in a reference frame that removes the overall expansion of the universe.

So be sure to click on it, and play around with it!

Here’s an artist’s concept of the Virgo Supercluster, via Wikimedia Commons. Look toward the center to find our Local Group.

The lead author of this study is Ed Shaya of the University of Maryland in collaboration with Brent Tully of University of Hawaii, Yehuda Hoffman of Hebrew University in Israel, and Daniel Pomarede of University of Paris-Saclay in France. These scientists used what they said is a novel method for determining galaxy orbits, which they called numerical action. Brent Tully said:

For the first time, we are not only visualizing the detailed structure of our Local Supercluster of galaxies but we are seeing how the structure developed over the history of the universe. An analogy is the study of the current geography of the Earth from the movement of plate tectonics.

These dramatic merger events are only part of a larger show. There are two overarching flow patterns within this volume of the universe. All galaxies in one hemisphere of the region – including our own Milky Way – are streaming toward a single flat sheet. In addition, essentially every galaxy over the whole volume is flowing, as a leaf would in a river, toward gravitational attractors at far greater distances …

Representations of the orbits in the Virgo Supercluster can also be seen in the video below:

Bottom line: A team of astronomers has made the most detailed map ever of the orbits of galaxies in our local supercluster. It shows the past motions of some 1,400 galaxies within 100 million light-years of our Milky Way.

Via University of Hawaii Institute for Astronomy