Deep Space is the second company in less than a year to say it will join the rush to the rich fields of water and precious metals in near-Earth asteroids.

On January 22, 2013, a new company called Deep Space Industries, Inc. became the second company in less than a year to join what is being called the new asteroid gold rush. Scientists have known for decades that there are rich fields of water and precious metals available in near-Earth asteroids. Now, for the first time, companies are seriously queuing up to be among the first to gather those resources. Deep Space Industries said at a formal announcement on January 22 at the Santa Monica Museum of Flying in California that it will build “the world’s first fleet of commercial asteroid-prospecting spacecraft.” It has named its first class of spacecraft FireFly (a brilliant tribute to the beloved but short-lived Firefly TV series of 2002-2003?) and said these craft will utilize low-cost CubeSat components and get discounted delivery to space by ride-sharing on the launch of larger communications satellites.

Planetary Resources, Inc. made a similar announcement in April 2012, at which time that company said it intended to launch a demonstration mission to Earth orbit within two years.

Likewise, Deep Space says the first FireFly craft will be launched in 2015 on journeys of “two to six months.” 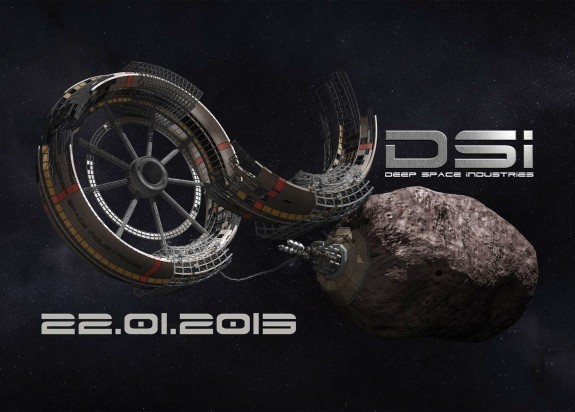 On January 22, 2013, Deep Space Industries announced plans for a fleet of spacecraft whose job will be to harvest the rich resources found in asteroids.

Deep Space Chairman is Rick Tumlinson, who signed up the world’s first space tourist, led the team that took over the Mir space station, was a Founding Trustee of the X Prize, and founded the world’s first commercial space suit company Orbital Outfitters. He said in a press release:

Using low cost technologies, and combining the legacy of our space program with the innovation of today’s young high tech geniuses, we will do things that would have been impossible just a few years ago.

If you’re a space fan, like me, you can’t argue with that. 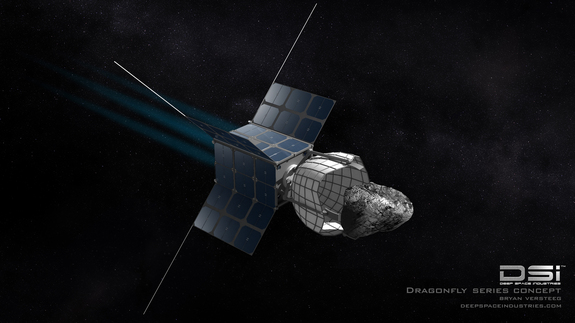 Artist’s concept of the Dragonfly spacecraft. Deep Space says it will use this craft to capture and return asteroid samples for return to Earth orbit for mining operations. Image via Deep Space Industries. 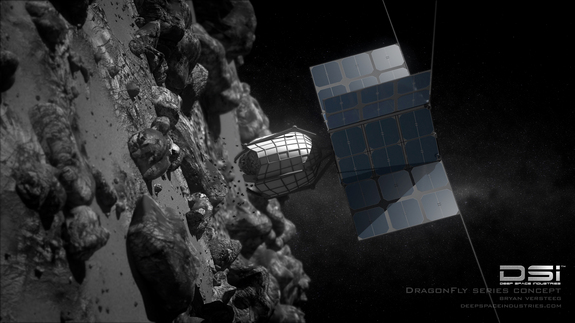 Deep Space says that DragonFly will have a picker to capture asteroids for mining operations. Image via Deep Space Industries.

Starting in 2016, Deep Space says it will will begin launching 70-pound DragonFly spacecraft for round-trip visits that bring back samples. The DragonFly expeditions will take two to four years, depending on the target.

The CEO of Deep Space is David Gump, who produced the first TV commercial shot on the International Space Station for RadioShack. He said:

The public will participate in FireFly and DragonFly missions via live feeds from Mission Control, online courses in asteroid mining sponsored by corporate marketers, and other innovative ways to open the doors wide. The Google Lunar X Prize, Unilever, and Red Bull each are spending tens of millions of dollars on space sponsorships, so the opportunity to sponsor a FireFly expedition into deep space will be enticing. 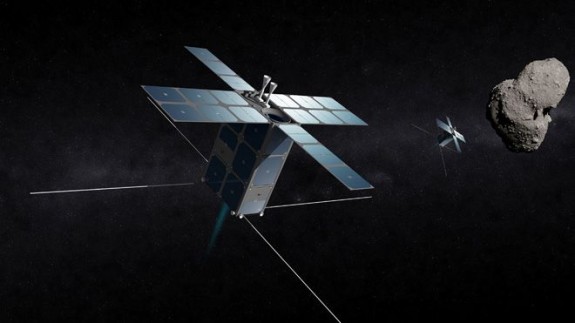 Artist’s concept of a mine in space. Image via Deep Space Industries.

Deep Space also has a patent-pending technology called the MicroGravity Foundry, which it says will transform raw asteroid material into complex metal parts. According to Deep Space:

The MicroGravity Foundry is a 3D printer that uses lasers to draw patterns in a nickel-charged gas medium, causing the nickel to be deposited in precise patterns. 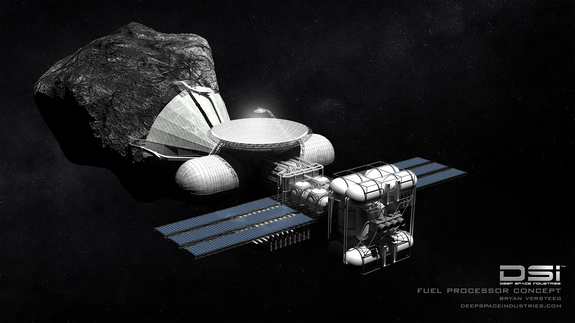 It has been realized for some decades that asteroids have resources useful for space travel and exploration, and that, if means can be found to harvest these resources, it will become less expensive to explore space. For example, fuel for space missions could be made in space from the volatiles in asteroids. Gump said:

Using resources harvested in space is the only way to afford permanent space development. More than 900 new asteroids that pass near Earth are discovered every year. They can be like the Iron Range of Minnesota was for the Detroit car industry last century — a key resource located near where it was needed. In this case, metals and fuel from asteroids can expand the in-space industries of this century. That is our strategy. 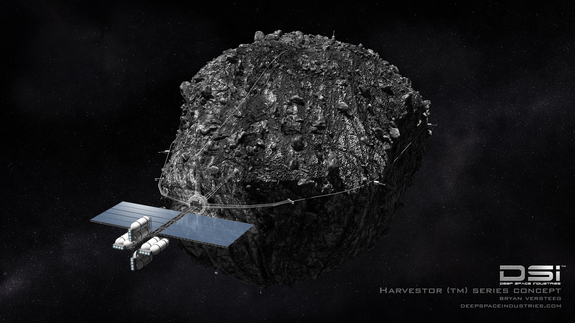 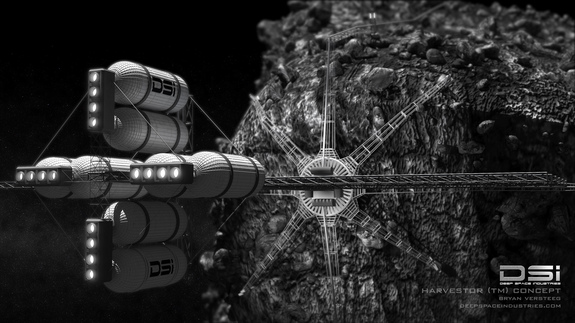 Bottom line: Deep Space Industries announced on January 22, 2013 that it will join the race to learn to find and utilize resources found in near-Earth asteroids.

Planetary Resources, Inc. announces plans to mine asteroids for water and precious metals