A rare find by meteorite hunters in Florida, from the daylight meteor that streaked across skies in the U.S. southeast in late January. 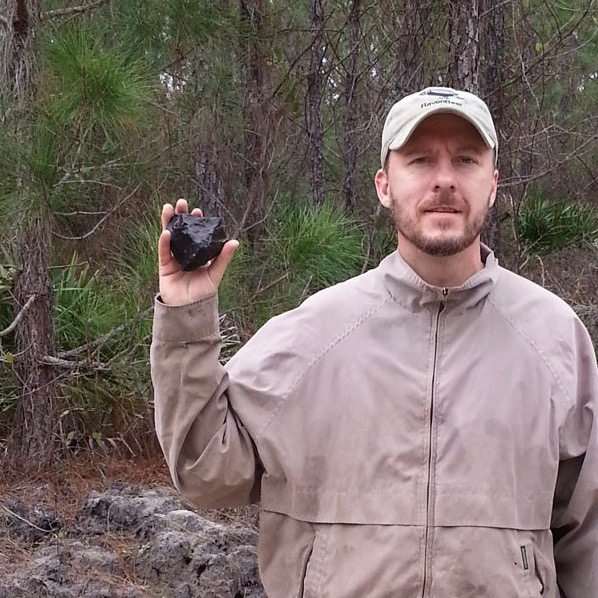 Josh Adkins holds up an 800-gram meteorite – a chunk of rock from space – associated with the January 24, 2016 daylight meteor over the U.S. Southeast. Photo by Brendan Fallon via MikesAstroPhotos.com. Used with permission.

UPDATE February 16, 2016. Fragments of a daytime fireball – seen late last month over a large portion of northern Florida, southeast of Georgia and South Carolina – have now been found. Meteorite enthusiasts have picked up at least six meteorites ranging from 8.5 grams to 800 grams, just north of Osceola National Forest, near Lake City, in northern Florida.

Mike Hankey, Larry Atkins, Laura Atkins, Brendan Fallon, and Josh Adkins went meteorite hunting for several days, ranging through swampland and pine forests, and were successful. Alan Rubin, a meteorite expert and researcher at University of California, Los Angeles, is currently analyzing one of the fragments to determine the classification of what’s now being called the Osceola meteorite.

The zone where the space rocks were found perfectly matches the end of the trajectory of the meteor, which suggests the found meteorites are from the January 24, 2016, event. 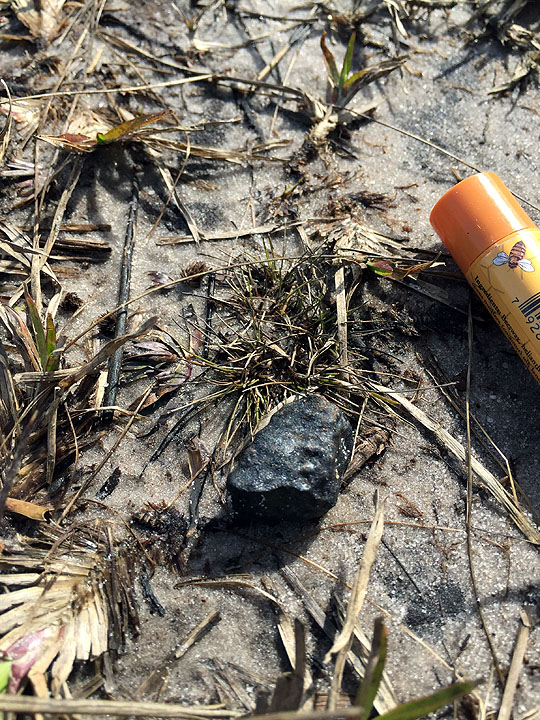 Mike Hankey found the first of 6 fragments located so far. Mike wrote: “I paused for a second to stretch, looked down and there it was.” Photo via MikesAstroPhotos.com. Used with permission. 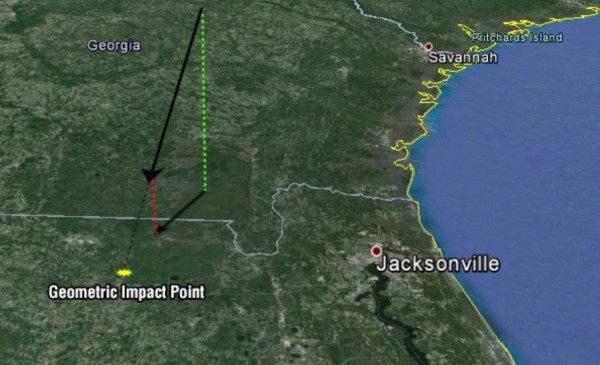 The American Meteor Society says there are now nearly 130 reports of the very bright meteor that streaked over the U.S. Southeast on January 24.

The huge meteor was seen in broad daylight near 10:25 a.m. ET. Most observers say the bright meteor showed an orange color.

Did you see it? Report it here. 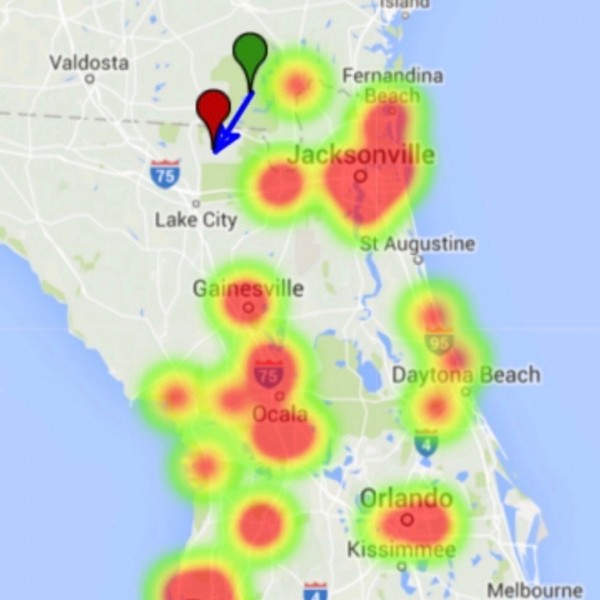 View larger. | A portion of a ‘heat map’ – showing location of witnesses or observers, and ground trajectory – of January 24, 2016, daylight meteor via the American Meteor Society.

Why do people search for meteorites, after a bright fireball streaks across the skies?

For one thing, these rocks from space are ancient, forged at the birth of our solar system, and – notwithstanding their fiery plunge into Earth’s atmosphere – they are relativity pristine. So meteorites hold secrets about our solar system, and scientists want to study them for this reason.

Plus space rocks are valuable. An article at LiveScience.com in 2012 said:

If you see a bright fireball, how can you tell it’s a true meteor from the depths of space, and not just space junk falling back into our atmosphere from Earth orbit?

There are thousands of objects orbiting Earth that are considered space junk. Most are rocket stages and other related parts, which after circling our planet for some time may re-enter the atmosphere and disintegrate. If this happens, the object usually shows a lot of fragments and looks considerably slower than a natural (space rock) meteor.

The most spectacular example of an incoming space rock in recent years was the 17-meter (55-foot) rock that penetrated the atmosphere over Chelyabinsk, Russia in February, 2013. It wasn’t detected beforehand, because it was approaching Earth from the sun’s direction.

That meteor – which broke windows in six Russian cities and caused more than 1,500 people to report in with injuries, mostly from flying glass – is a reminder of how important it is to support and improve the asteroid detection programs, such as NASA’s Near-Earth Object program.

About five tons of meteoritic material from the spectacular Chelyabinsk fireball did reach the ground, including a 1,400-pound (650-kg) meteorite that was recovered by divers from the bottom of Russia’s Lake Chebarkul. Scientists later used this material in their effort to try to figure out the origin of the Chelyabinsk meteor, which today, three years later, still isn’t known for certain.

So keep watching the skies … and the ground! 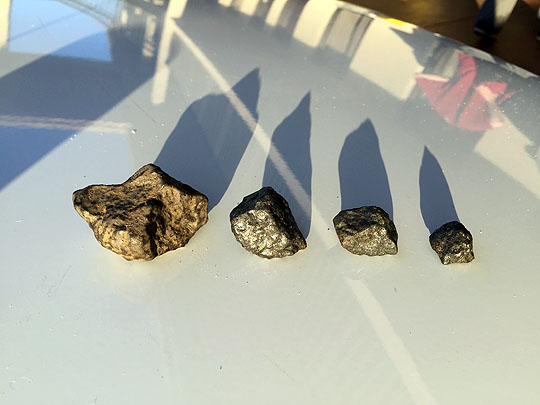 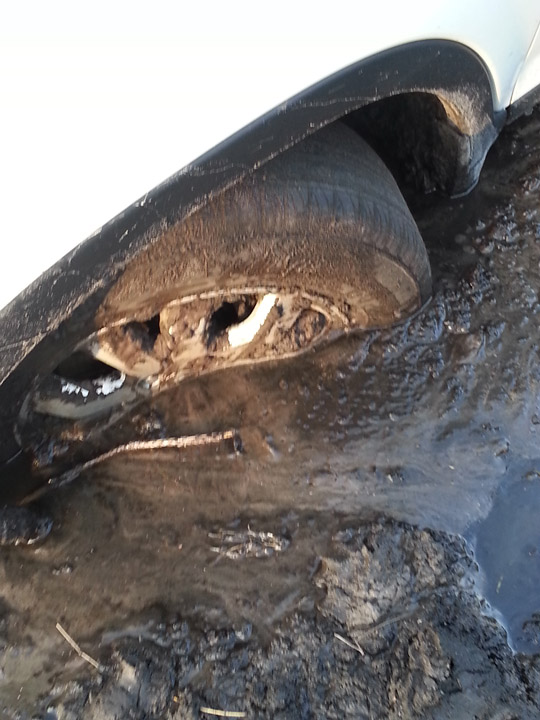 Meteorite hunting isn’t easy. It’s often done far from the main roads. Mike Hankey wrote: “It took them two days two get the truck out of the mud. The rest of the week for them was tough. I kept wondering when Brendan would give it up and come home. The Sunday morning after I got home, I got a text from Brendan and Josh. They had found a stone, a big one.” Photo and story via MikesAstroPhotos.com. Used with permission.

Bottom line: People in a broad swath across the southeastern U.S. reported a daylight meteor on January 24, 2016. Fragments of the space rock have now been recovered in northern Florida.