A collision with a high-energy radiation particle may have corrupted software running in Dawn’s main computer, and sent the spacecraft into safe mode. 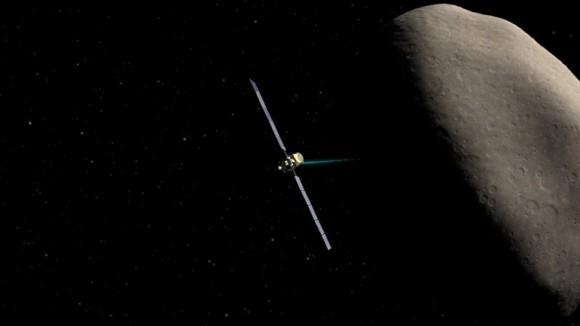 Artist’s concept of Dawn spacecraft at Ceres. Due to this setback, the craft is now scheduled to arrive at Ceres in April 2015, a month later than planned. Image via NASA/JPL-Caltech/UCLA

NASA’s Dawn spacecraft – now in route to the dwarf planet Ceres, the largest object in the asteroid belt – unexpectedly went into safe mode on September 11, 2014, but it has now recovered. It is now due to reach Ceres in April 2015. That’s a month later than originally scheduled, thanks to this month’s setback.

A similar event affected the spacecraft three years ago as it approached its first destination, the protoplanet Vesta. Gizmag reported yesterday (September 17):

The [Dawn mission] team theorized that a collision with a high-energy radiation particle had corrupted software running in the main computer, as was believed to be the case with the probe’s earlier malfunction that occurred three years previously. The phenomenon caused the spacecraft to enter a safe mode, shutting off the probe’s ion thrusters in the process. The situation was further complicated by the discovery that Dawn had suffered a second malfunction, that had affected the spacecraft’s capacity to orientate her main antenna towards Earth – a process vital for the communication and relaying of orders.

To remedy the first problem, Dawn mission engineers quickly swapped to one of the other ion engines and a different electronic controller. The second issue required a full computer reset that succeeded in restoring the antenna’s correct orientation.

Dawn was launched in September 2007 atop a Delta II-Heavy rocket with a mission to explore Vesta and the dwarf planet Ceres. Dawn spent nearly 14 months orbiting Vesta, the second-most-massive object in the main asteroid belt between Mars and Jupiter, from 2011 to 2012. When Dawn arrives at Ceres, it will become the first spacecraft to go into orbit around two destinations in our solar system beyond Earth.

The mission is now going forward as planned. 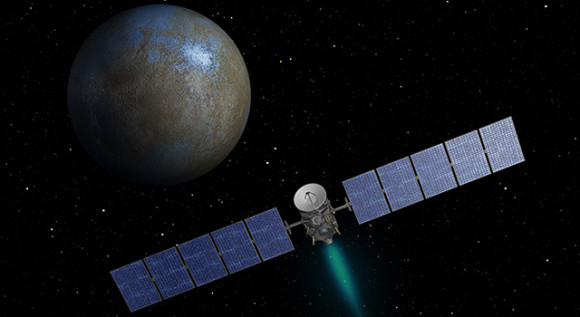