The spacecraft will arrive at Ceres, a Texas-sized dwarf planet never before visited by a spacecraft, on March 6, 2015. 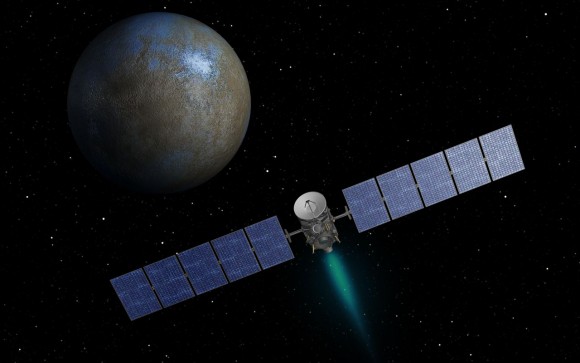 NASA’s Dawn spacecraft has entered an approach phase in which it will continue to close in on Ceres, the largest object in the asteroid belt between planets Mars and Jupiter. Dawn launched in 2007 and is scheduled to enter Ceres orbit in March 2015.

Dawn recently emerged from solar conjunction, in which the spacecraft is on the opposite side of the sun, limiting communication with antennas on Earth. Now that Dawn can reliably communicate with Earth again, mission controllers have programmed the maneuvers necessary for the next stage of the rendezvous. Dawn is currently 400,000 miles (640,000 kilometers) from Ceres, approaching it at around 450 miles per hour (725 kilometers per hour).

The spacecraft’s arrival at Ceres will mark the first time that a spacecraft has ever orbited two solar system targets. Dawn previously explored the protoplanet Vesta for 14 months, from 2011 to 2012, capturing detailed images and data about that body.

Christopher Russell is principal investigator for the Dawn mission. He said:

Ceres is almost a complete mystery to us. Ceres, unlike Vesta, has no meteorites linked to it to help reveal its secrets. All we can predict with confidence is that we will be surprised.

The two planetary bodies are thought to be different in a few important ways. Ceres may have formed later than Vesta, and with a cooler interior. Current evidence suggests that Vesta only retained a small amount of water because it formed earlier, when radioactive material was more abundant, which would have produced more heat. Ceres, in contrast, has a thick ice mantle and may even have an ocean beneath its icy crust.

The next couple of months promise continually improving views of Ceres, prior to Dawn’s arrival. By the end of January, the spacecraft’s images and other data will be the best ever taken of the dwarf planet.