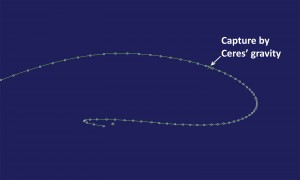 In this view, looking down on the north pole of Ceres, the sun is off the figure to the left and Ceres’ counterclockwise orbital motion around the sun takes it from the bottom of the figure to the top. Dawn flies in from the left, travels out ahead of Ceres, and then is captured on the way to the apex of its orbit. The white circles are at one-day intervals, illustrating how Dawn slows down gradually at first. (When the circles are closer together, Dawn is moving more slowly.) After capture, both Ceres’ gravity and the ion thrust slow it even more before the craft accelerates to the end of the approach phase. (You can think of this perspective as being from above. Then the next figure shows the view from the side, which here would mean looking toward the action from a location off the bottom of the graphic.) Credit: NASA/JPL

Thank you! Your submission has been received!
Oops! Something went wrong while submitting the form.
END_OF_DOCUMENT_TOKEN_TO_BE_REPLACED