It’s the first definitive detection of a property other than mass that’s been linked to the invisible dark matter making up 27 percent of our universe. 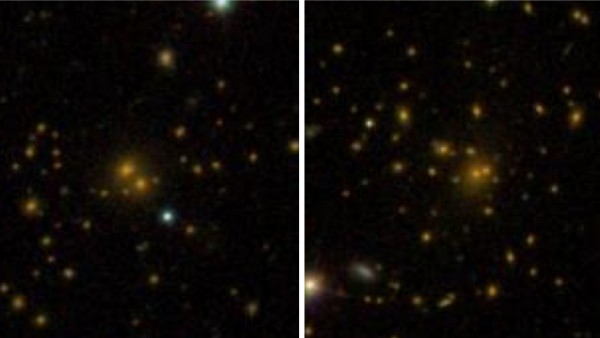 A new study published January 25, 2016 in Physical Review Letters suggests that a galaxy’s cluster’s internal structure is linked to its dark matter environment. It’s the first time that a property besides the mass of a galaxy cluster has been linked with surrounding dark matter.

Hironao Miyatake at NASA’s Jet Propulsion Laboratory led this research. He said in a statement from JPL:

Galaxy clusters are like the large cities of our universe.

In the same way that you can look at the lights of a city at night from a plane and infer its size, these clusters give us a sense of the distribution of the dark matter that we can’t see.

Dark matter is thought to be all around us and to account for 27 percent of all matter and energy in the universe. For decades, scientists have inferred the presence of dark matter by looking at normal matter. They’ve learned, for example, that the heavier a galaxy cluster is – that is, the more mass it contains – the more dark matter it has in its environment.

The link between a galaxy’s cluster’s mass and surrounding dark matter is well established.

Finding a new property of visible matter that’s also linked with dark matter – in this case, the internal structure of galaxy clusters – gives astronomers another way to study not just dark matter, but also dark energy, the large-scale structure of the universe and inflation physics. Hironao Miyataoke expressed his excitement by saying:

I am thrilled that we have finally found clear evidence of the connection between the internal structure of clusters and surrounding dark matter environment.

We checked lots of things to make sure this result, and finally concluded this is real! 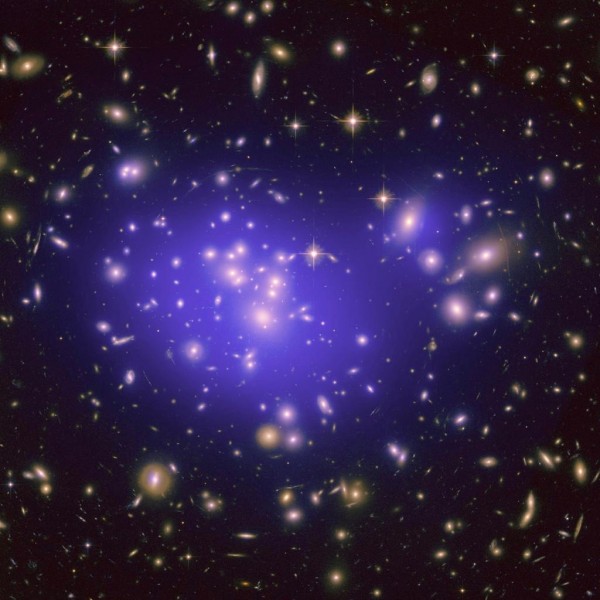 View larger. | This image from NASA’s Hubble Space Telescope shows the inner region of Abell 1689, an giant cluster of galaxies. Scientists say the galaxy clusters we see today have resulted from fluctuations in the density of dark matter in the early universe. Image via NASA/ESA/JPL-Caltech/Yale/CNRS

The JPL statement explained how these scientists conducted their research:

Researchers studied approximately 9,000 galaxy clusters from the Sloan Digital Sky Survey DR8 galaxy catalog, and divided them into two groups by their internal structures: one in which the individual galaxies within clusters were more spread out, and one in which they were closely packed together.

The scientists used a technique called gravitational lensing — looking at how the gravity of clusters bends light from other objects — to confirm that both groups had similar masses.

But when the researchers compared the two groups, they found an important difference in the distribution of galaxy clusters. Normally, galaxy clusters are separated from other clusters by 100 million light-years on average. But for the group of clusters with closely packed galaxies, there were fewer neighboring clusters at this distance than for the sparser clusters.

In other words, the surrounding dark-matter environment determines how packed a cluster is with galaxies.

Astronomer David Spergel, a study co-author, summed up the results when he said:

Cosmologist have long held a very simple theory, [that] the properties of a cluster is determined solely by its mass.

These results show that the situation is much more complex: the clusters’ [dark matter] environment also plays an important role.

Astronomers have been trying to detect evidence for this more complex picture for many years: this is the first definitive detection. 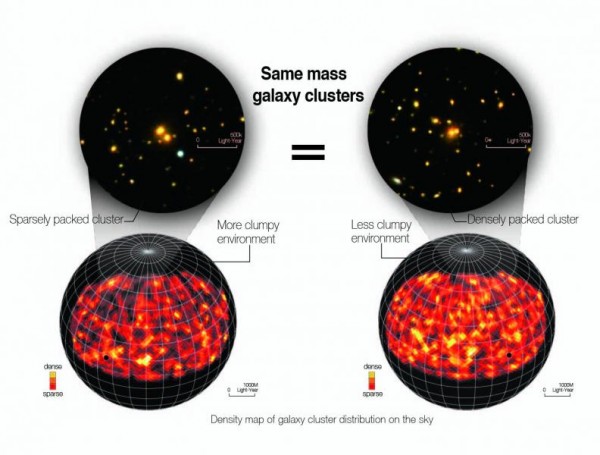 Bottom line: A new recognition of a link between the internal structure of galaxy clusters and surrounding dark matter.

Via NASA JPL and the Kavli Institute.