Where was dark matter in early universe?

Surprising new observations of distant galaxies suggest that dark matter was less influential in the early universe than it is today.

Dark matter – shown in red – may have been less concentrated in the early universe (right) than in the present-day universe (left), according to new observations. Artist’s concept via ESO/L. Calçada.

The first direct evidence of dark matter appeared in the late 1970s, when Vera Rubin and Kent Ford of the Carnegie Institution of Washington observed the Andromeda Galaxy to be rotating all wrong. Stars and gas at its edges were moving just as fast as stars and gas near its center. This wasn’t just strange; it was contrary to established laws of motion saying that planets closer to the sun – or stars closer to the center of a galaxy – should move faster in orbit. For stars at a galaxy’s edges to be moving at the same speed as stars near a galaxy’s center suggested to astronomers in the 1970s that what we thought was a galaxy’s edge was not the edge, after all. And so astronomers began speaking of vast halos of unseen matter – or dark matter – surrounding galaxies. They’ve been talking about dark matter ever since.

Modern cosmology has embraced the idea of dark matter. Now, for example, astronomers believe that galaxies are made in a process whereby dark matter merges and clumps together. Galaxies and dark matter go hand in hand, like cake and ice cream, or love and marriage. That’s why it’s so surprising that new observations with the European Southern Observatory (ESO) Very Large Telescope in Chile indicate massive star-forming disk galaxies in the early universe were less influenced by dark matter than galaxies today.

In other words, the new observations show that the outer parts of distant galaxies rotate more slowly than comparable regions of galaxies in the local universe, just as Vera Rubin and Kent Ford would have thought they should, before their ground-breaking revelations about the Andromeda galaxy.

The new and unexpected observations have led astronomers to suggest that dark matter might have been less concentrated in the early universe.

The research is presented in four papers, one of which was published March 15, 2017 in the peer-reviewed journal Nature. 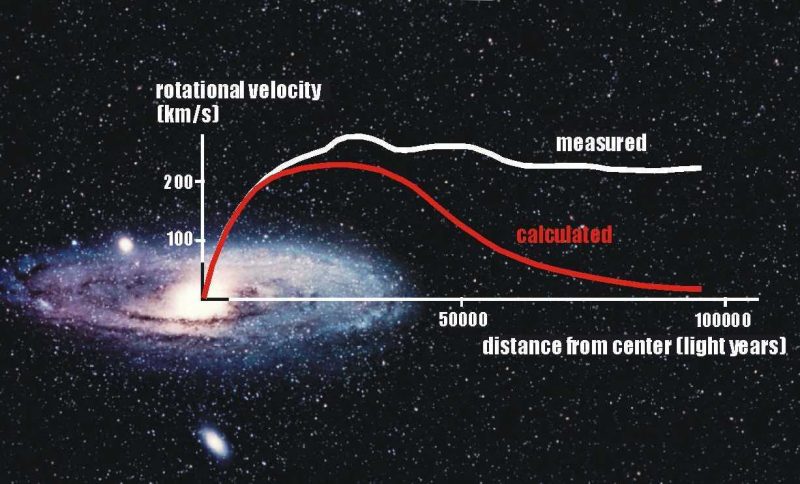 Prior to the late 1970s, astronomers calculated that stars in the outer parts of galaxies should revolve around the galaxies’ centers more slowly than stars in the inner part of galaxies. In the nearby universe, though, that doesn’t happen, and dark matter is thought to be the reason. Now it seems that – in the distant universe – it does happen.

The international team of astronomers conducting this new research was led by Reinhard Genzel at the Max Planck Institute for Extraterrestrial Physics in Garching, Germany.

The team used ESO’s Very Large Telescope in Chile to measure the rotation of six massive, star-forming galaxies in the distant universe, at the peak of galaxy formation 10 billion years ago. The outer regions of these distant galaxies seem to be rotating more slowly than regions closer to the core. Genzel said in an ESO statement that there are probably two causes for this:

Firstly, most of these early massive galaxies are strongly dominated by normal matter, with dark matter playing a much smaller role than in the Local Universe.

Secondly, these early disks were much more turbulent than the spiral galaxies we see in our cosmic neighborhood.

Both effects seem to become more marked as astronomers look further and further back in time, into the early universe. ESO said:

This suggests that 3 to 4 billion years after the Big Bang, the gas in galaxies had already efficiently condensed into flat, rotating disks, while the dark matter halos surrounding them were much larger and more spread out. Apparently it took billions of years longer for dark matter to condense as well, so its dominating effect is only seen on the rotation velocities of galaxy disks today.

This explanation is consistent with observations showing that early galaxies were much more gas-rich and compact than today’s galaxies.

The six galaxies mapped in this study were among a larger sample of 100 distant, star-forming [disk galaxies] imaged with the KMOS and SINFONI instruments at ESO’s Very Large Telescope at the Paranal Observatory in Chile … In addition, two further studies of 240 star forming [disk galaxies] also support these findings.

This new result does not call into question the need for dark matter as a fundamental component of the universe or the total amount. Rather it suggests that dark matter was differently distributed in and around disk galaxies at early times compared to the present day. 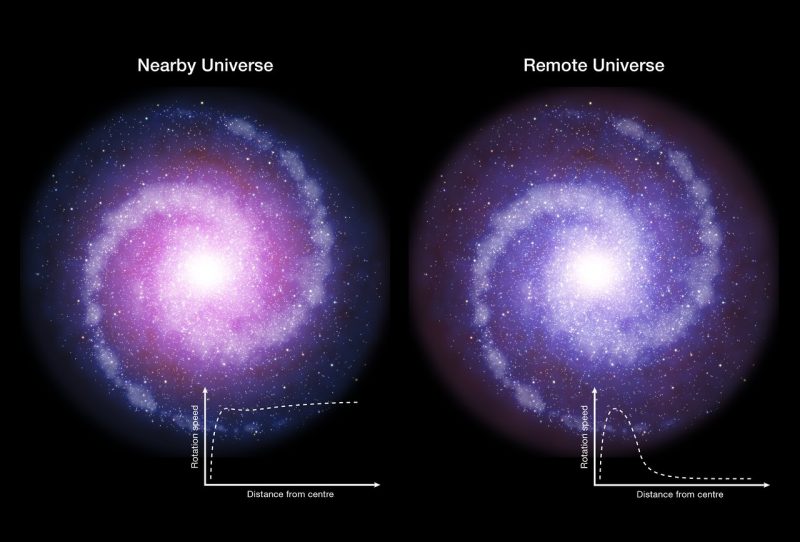 Bottom line: New observations suggests that dark matter was less influential in the early universe than it is today.