Is there life in the multiverse?

New research shows that life might be common throughout the multiverse … if there is a multiverse. 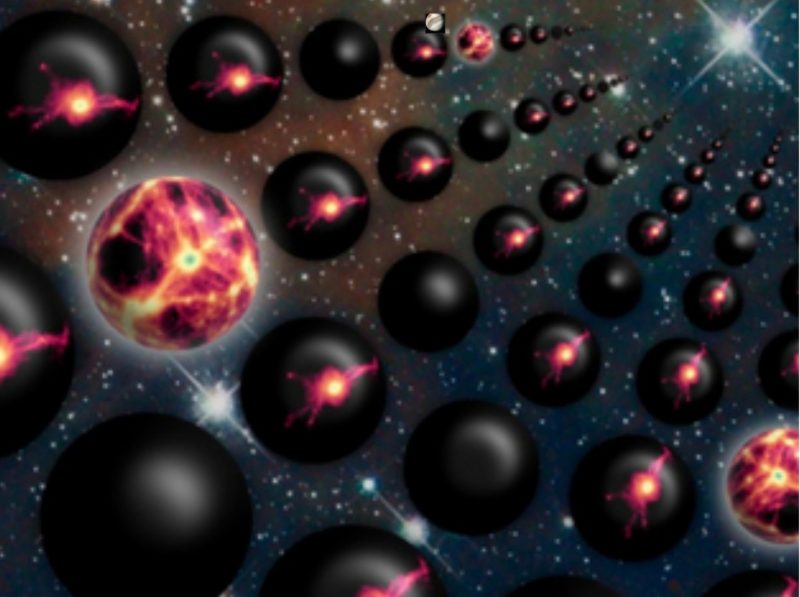 Could our universe be part of a wider multiverse? And could this multiverse be filled with life? Image via Jaime Salcido/ EAGLE Collaboration/ Durham University.

The word universe used to imply all that exists, but no longer. Today’s cosmologists – scientists who study the biggest of all possible big pictures – now consider the idea that our known universe might be just one of many unknown (and unknowable?) universes. They call this plethora of possible universes the multiverse. Now scientists in the U.K. and Australia have taken an interesting step toward probing the multiverse. Their work, which is based on computer simulations, suggests that life could potentially be common throughout the multiverse, if a multiverse exists. The findings are published May 14, 2018, in two related papers in the peer-reviewed journal Monthly Notices of the Royal Astronomical Society.

This research, and in fact the idea of a multiverse, stems from astrophysicists’ calculations regarding dark energy. That’s the mysterious force that appears to be accelerating the expansion of our universe.

How to explain this? The explanation could indeed be that, as Luke Barnes at Western Sydney University – lead author on one of the papers – explained in a statement, there could indeed be a multiverse in which life is extremely limited, and we in this universe might just happen to have:

That is, we might just happen to live in a universe whose dark energy is small enough to enable the beautiful galaxies and stars we see to form, permitting life as we know it.

These researchers used computer simulations of the cosmos – produced under the EAGLE project – to learn that, in contrast to the results of earlier studies, adding dark energy to the universe – even up to a few hundred times the amount observed in our universe – would actually only have a modest impact upon star and planet formation. It would not, in other words, prevents stars and planets from forming.

If this is true, it opens up the possibility that life might be possible throughout a wider range of other universes (if they exist), the researchers said.

Jaime Salcido, a postgraduate student in Durham University’s Institute for Computational Cosmology, is lead author on the other newly published papers. He said:

For many physicists, the unexplained but seemingly special amount of dark energy in our universe is a frustrating puzzle.

Our simulations show that even if there was much more dark energy or even very little in the universe then it would only have a minimal effect on star and planet formation, raising the prospect that life could exist throughout the multiverse.

As always, there are issues and problems with this theory, which you can read about here. In fact, at one point in their statement, these cosmologists mentioned the possibility that the only explanation for their work in its entirety might be “new laws of nature.” You don’t see scientists in their studies call for new laws of nature very often. In fact, I can’t remember the last they did that. But this work appears in the journal Nature, which is one of the most established journals; the work must have undergone rigorous peer review. It’ll be interesting to see if this study sparks other studies of a similar nature, leading to a similar conclusion.

Read more about the new research from Durham University

By the way, one of the researchers here – Luke Barnes – is an excellent science explainer. In 2016, he wrote the script for the video below. While it doesn’t specifically mention the new research being discussed here, it does touch on the multiverse idea … and it’ll give you an idea of the sorts of things today’s astrophysicists and cosmologists think about.

Bottom line: New research shows that life might be common throughout the multiverse, if there is a multiverse.

Sources:
The impact of dark energy on galaxy formation. What does the future of our Universe hold?