Commercial space station resupply launch success! The Cygnus spacecraft is at last on its way to the International Space Station, carrying vital food and supplies. 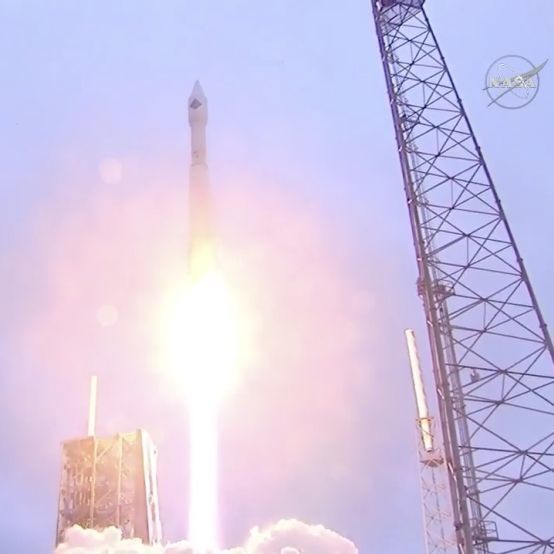 After several days of delay due to bad weather, Orbital ATK’s Cygnus spacecraft successfully lifted off from Kennedy Space Center in Florida yesterday (December 6, 2015), loaded with vital cargo to resupply the International Space Station. It launched aboard a United Launch Alliance Atlas V rocket. Orbital ATK is a private American spaceflight company under a commercial resupply services (CRS) contract to NASA. This launch – CRS-4 – is Orbital ATK’s first since their CRS-3 launch in October, 2014, when an unmanned Antares rocket carrying another ISS resupply ship exploded in a massive fireball six seconds after liftoff from NASA’s Wallops Flight Facility in Wallops Island, Virginia.

During that failed 2014 launch, the 14-story rocket faltered just after launch, then exploded, before falling back onto the launch pad with a second larger explosion. No one was hurt, but the rocket itself was a total loss, and the Wallops launch pad was extensively damaged. See video of the 2014 launch.

That is why Orbital ATK switched its launch plans to the Atlas rocket, while retrofitting its Antares rocket design.

The CRS-4 Cygnus capsule is currently en route to the International Space Station. It’s carrying about 7,300 pounds (about 3,300 kg) of food, hardware, and scientific equipment for Expedition 44 crew members.

Bottom line: Congratulations to Orbital ATK for the successful December 6, 2015 launch of a resupply mission via Cygnus spacecraft to ISS.