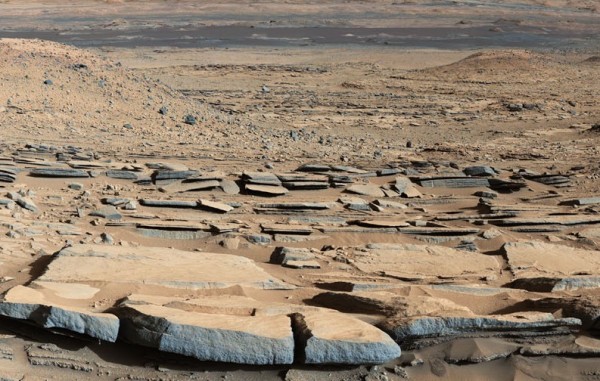 Strata rocks and dark sand in an area that has been named ‘Kimberley.’ The strata in the foreground dip towards the base of Mount Sharp, indicating flow of water toward a basin that existed before the larger bulk of the mountain formed. The images obtained by NASA’s Curiosity rover in October, 2015, led scientists conclude there were ancient lakes on this area. Credits: NASA/JPL-Caltech/MSSS

Since its August 5-6, 2012 landing on Mars – an event known to space scientists as seven minutes of terror – NASA’s Curiosity rover has been studying the surface of Mars. Its job now is to determine whether the Gale Crater area, the area in which it landed, ever had the right conditions to support microbial life. As of December, 2015 – using its 17 cameras – Curiosity has acquired over 292,000 images from the surface of Mars. The images on this page are our picks of some of the best images captured by the rover in 2015. 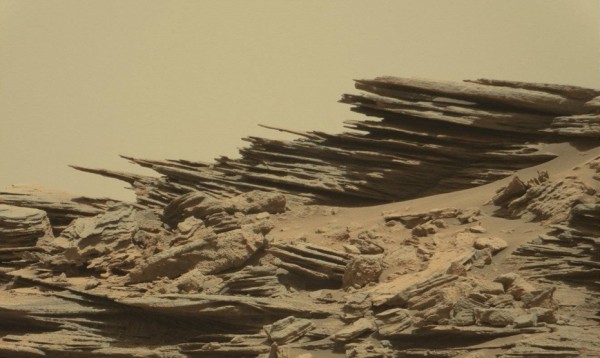 Curiosity has seen a lot of layered rocks on the surface of Mars, like these amazing rocks captured in July, 2015. Read more about this image. Credits: NASA/JPL-Caltech/MSSS

The rover mission’s official name is the Mars Science Laboratory. The rover itself is 9 feet (about 3 meters) long and 7 feet (about 2.7 meters) wide, and weighs about 2,000 pounds (900 kg).

It’s not Arizona or Utah … this is planet Mars as seen by Curiosity on September, 2015. This image shows regions that include a long ridge teeming with hematite, an iron oxide. Just beyond is an undulating plain rich in clay minerals. And just beyond that are a multitude of rounded buttes, all high in sulfate minerals. The changing mineralogy in these layers of Mount Sharp suggests a changing environment in early Mars, though all involve exposure to water billions of years ago. Image via NASA/JPL-Caltech/MSSS 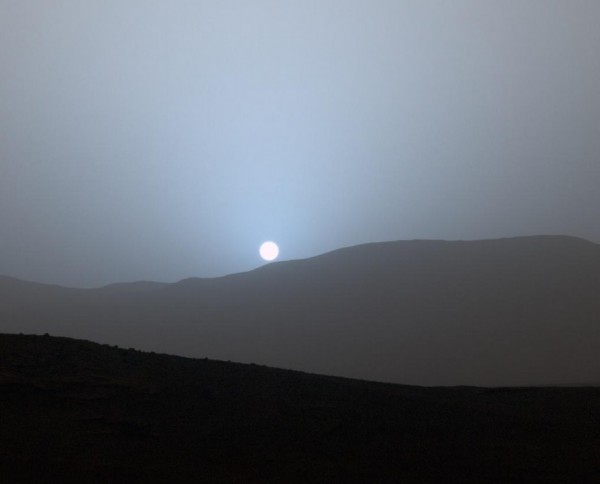 Sunset on Mars. The Curiosity rover captured the sun setting on April 15, 2015 from the Gale Crater. The color has been calibrated and white-balanced to remove camera artifacts. The rover’s ‘Mastcam’ sees color very similarly to what human eyes see, although it is actually a little less sensitive to blue than people are. Dust in the Martian atmosphere has fine particles that permit blue light to penetrate the atmosphere more efficiently than longer-wavelength colors. That causes the blue colors in the mixed light coming from the sun to stay closer to sun’s part of the sky, compared to the wider scattering of yellow and red colors. Image via NASA/JPL-Caltech/MSSS

Two orbiters that were already studying Mars when Curiosity arrived. They are the Mars Reconnaissance Orbiter, and Mars Odyssey. These two act as satellites, relaying pictures and data from the rover back to Earth. 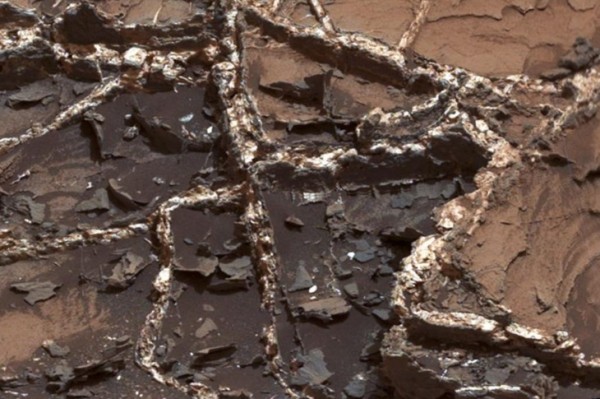 Diverse composition of mineral veins at the ‘Garden City’ site investigated by Curiosity suggests multiple episodes of groundwater activity. The prominent mineral veins vary in thickness and brightness, and include: 1) thin, dark-toned fracture filling material; 2) thick, dark-toned vein material in large fractures; 3) light-toned vein material, which was deposited last. Researchers used the Mastcam and other instruments on Curiosity in March and April 2015 to study the structure and composition of mineral veins at Garden City, for information about fluids that deposited minerals in fractured rock there. Image via NASA/JPL-Caltech/MSSS

Because color images use much more data or bandwidth to be transmitted to our planet, a lot of black and white images are sent to the orbiting spacecraft that occasionally passes over the rover’s location for a short time. However, some color images are eventually sent. 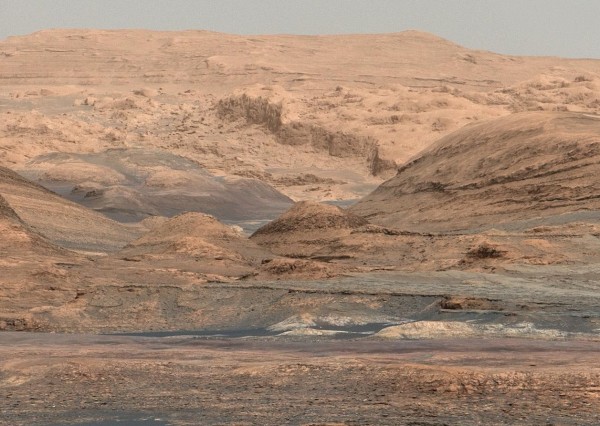 This is an area lining the northwestern edge of Mount Sharp. The scene combines multiple images taken with the Mast Camera on NASA’s Curiosity Mars rover on Sept. 25, 2015. Dunes are larger than wind-blown ripples of sand or dust that Curiosity and other rovers have visited previously. You can see the dark dunes by clicking again after opening this panorama. Image via NASA/JPL-Caltech/MSSS

Giant antennas at California (USA), Australia and Spain compose the Deep Space Network that receives pictures and data from the Mars spacecraft as well as from other interplanetary spacecraft. 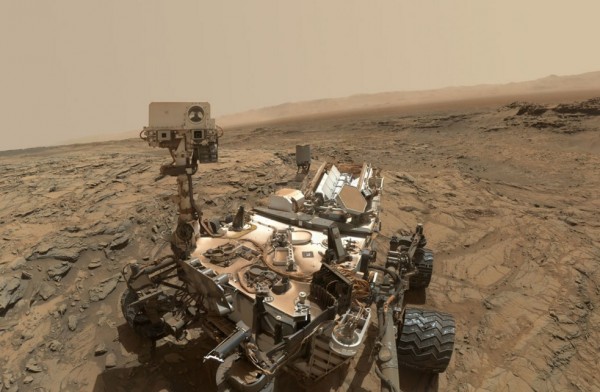 A selfie on Mars. Curiosity extended its robotic arm and used the camera on the arm’s end to capture this self portrait on October 6, 2015. The image was taken at the ‘Big Sky’ site, where its drill collected the mission’s fifth taste of Mount Sharp. Image via NASA/JPL-Caltech/MSSS 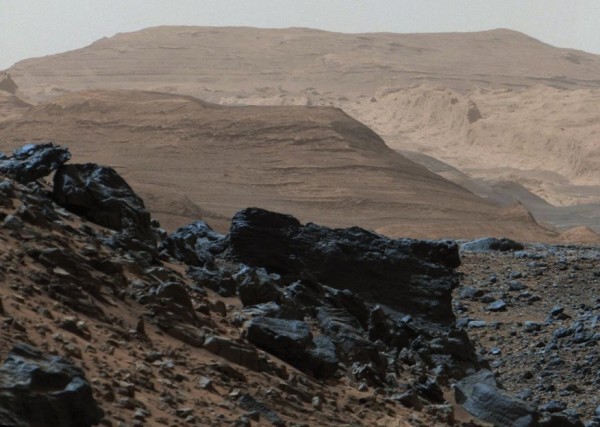 Dark rocks on route to mountains. Diverse terrain is visible on this image taken on Mount Sharp on April 10, 2015. The color has been approximately white-balanced to resemble how the scene would appear under daytime lighting conditions on Earth. Image via NASA/JPL-Caltech/MSSS 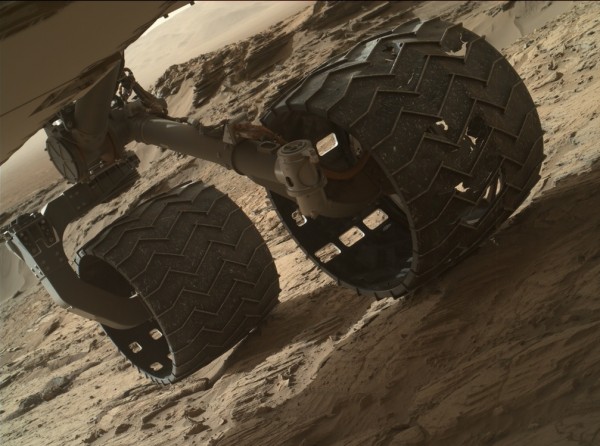 Damage on the aluminum wheels is evident after 7 miles (11.3 km) on the odometer of the Curiosity rover. Mars’ terrain and diverse rocks led to more wheel damage than was expected. However scientists think the 20 inches (51 cm) wheels may permit the rover to continue its mission. Image via NASA/JPL-Caltech/MSSS 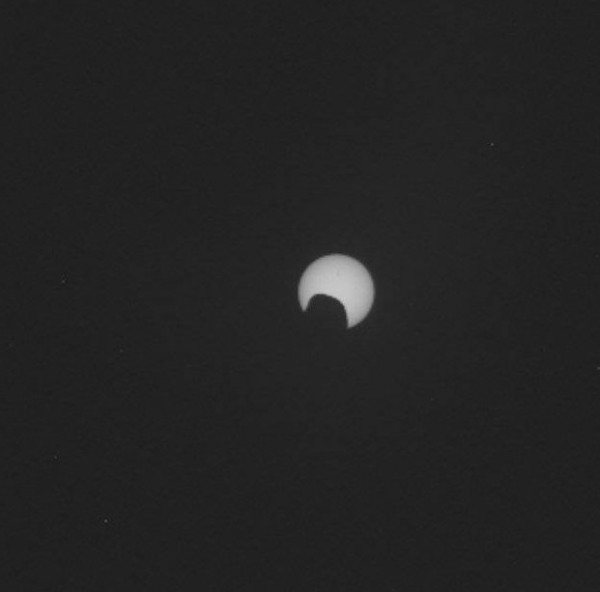 A Solar Eclipse from Mars. Curiosity captured Phobos, one of the two small martian moons passing in front of the Sun in July, 2015. Although Phobos is only about 14 miles (22.5 km) in diameter, it orbits Mars at just 6,000 km ( 3,728 miles) which is relatively close. Image via NASA/JPL-Caltech/MSSS

Where is Curiosity right now? The rover is located in an area of Mount Sharp that has been named Namib dune. The rover is analyzing the composition and grain size of a ripple.

Seven minutes of terror. Even if you have seen this video before, these images which show how Curiosity landed on Mars may still give you goosebumps: