The discovery adds to the evidence that ancient Mars was habitable for life. 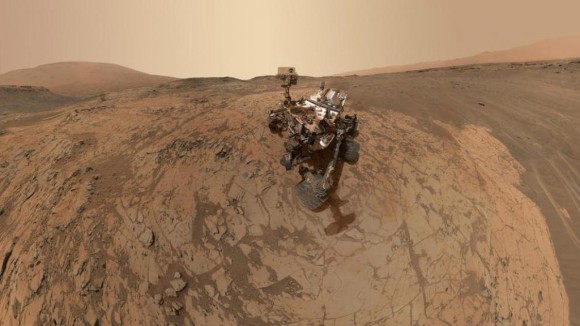 NASA’s Curiosity rover has made the first detection of nitrogen on the surface of Mars.

Nitrogen is one of the building blocks of larger molecules like DNA and RNA which encode genetic instructions, and proteins. The discovery adds to the evidence that ancient Mars once had conditions suitable for microbial life.

Nitrate (NO3), a nitrogen atom bound to three oxygen atoms, is a source of fixed nitrogen that can join with various other atoms and molecules.

The team made their discovery using the mass spectrometer and gas chromatograph of the Sample Analysis at Mars (SAM) instrument aboard Curiosity. They detected nitric oxide (NO)—one atom of nitrogen bound to an oxygen atom. These fixed nitrogen molecules could be released from the breakdown of nitrates during heating of Martian sediments.

The surface of Mars today is inhospitable for known forms of life, so the team thinks the nitrates are ancient, and probably came from non-biological processes like meteorite impacts and lightning in Mars’ distant past. 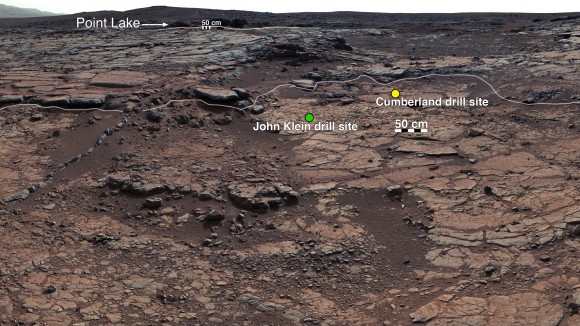 This mosaic of images from Curiosity’s Mast Camera (Mastcam) shows geological members of the Yellowknife Bay formation, and the sites where Curiosity drilled at targets John Klein and Cumberland. Image credit: NASA/JPL-Caltech/MSSS

Jennifer Stern of NASA’s Goddard Space Flight Center is lead author of a paper on this research published online in the Proceedings of the National Academy of Science. Stern said:

Finding a biochemically accessible form of nitrogen is more support for the ancient Martian environment at Gale Crater being habitable.

Curiosity, whose mission is to discover if Mars ever had conditions suitable for microbial life, has already found evidence of organic matter and dry riverbeds and minerals that only form in the presence of liquid water.

The evidence for nitrates was found in scooped samples of windblown sand and dust at a site dubbed Rocknest, and in samples drilled from mudstone at two sites in the Yellowknife Bay area, formed from sediment deposited at the bottom of an ancient lake.

The Rocknest sample is a combination of dust blown in from distant regions on Mars and more locally sourced materials, suggesting that nitrates are likely to be widespread across Mars.

Along with other nitrogen compounds, the SAM instruments detected nitric oxide in samples from all three sites. The team thinks most of the NO probably came from nitrate which decomposed as the samples were heated for analysis.

Certain compounds in the SAM instrument could also release nitrogen as samples are heated, but the amount of NO found is more than twice that which could be produced by SAM even in the most extreme and unrealistic scenario, according to Stern. Stern said:

Scientists have long thought that nitrates would be produced on Mars from the energy released in meteorite impacts, and the amounts we found agree well with estimates from this process.