Curiosity rover and its parachute spotted on descent to Mars

The Mars Reconnaissance Orbiter captured an image of the Curiosity rover as it descended by parachute to the surface of Mars.

Just after I told a friend that there was no way we could actually see the Curiosity rover descending to Mars, this image came along. Wow. I’m glad to be proven wrong! Here’s the new Mars rover – which touched down on Mars last night (5:31 UTC on August 6) – descending by parachute to the Red Planet’s surface. 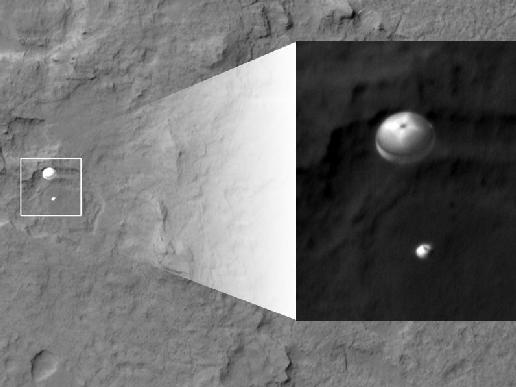 Curiosity rover descending to Mars by parachute on August 6 (August 5 according to clocks at JPL, which oversees the mission). This image comes from another spacecraft orbiting Mars, the Mars Reconnaissance Orbiter.

NASA’s Mars Reconnaissance Orbiter – which carries the High-Resolution Imaging Science Experiment (HiRISE) camera – captured this image of Curiosity while the orbiter was listening to transmissions from the rover. Curiosity and its parachute are in the center of the white box. The rover is descending toward the etched plains just north of the sand dunes that fringe “Mt. Sharp.” From the perspective of the orbiter, the parachute and Curiosity are flying at an angle relative to the surface, so the landing site does not appear directly below the rover.

Bottom line: The Mars Reconnaissance Orbiter captured an image of the Curiosity rover as it descended by parachute to the surface of Mars.