After more than a year in a clay-rich region, Curiosity is making a mile-long journey around some deep sand so that it can explore higher up Mount Sharp. 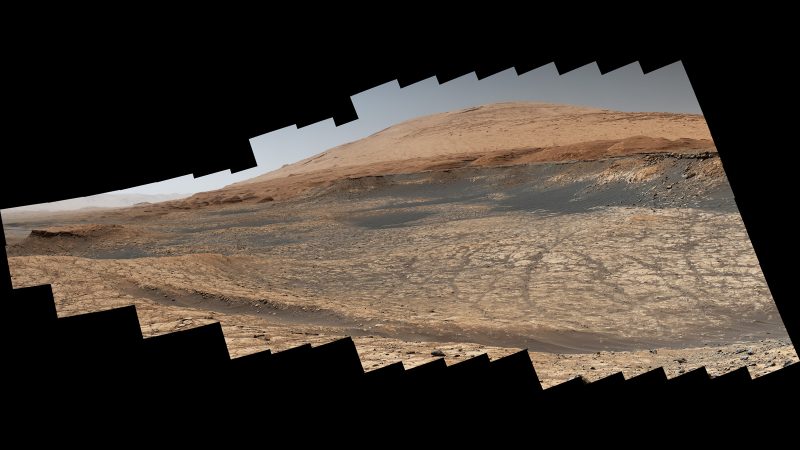 Stitched together from 116 images, this view captured by NASA’s Curiosity Mars rover shows the path it will take in the summer of 2020 as it drives toward the next region it will be investigating, the “sulfate-bearing unit.” Image via NASA/ JPL-Caltech/ MSSS.

NASA’s Curiosity Mars rover has started a road trip that will continue through the summer across roughly a mile (1.6 km) of terrain. By trip’s end, the rover will be able to ascend to the next section of the 3-mile-tall (5-km-tall) Martian mountain – called Mount Sharp – that it’s been exploring since 2014, searching for conditions that may have supported ancient microbial life.

Located on the floor of Gale Crater, Mount Sharp is composed of sedimentary layers that built up over time. Each layer helps tell the story about how Mars changed from being more Earth-like – with lakes, streams and a thicker atmosphere – to the nearly-airless, freezing desert it is today.

The rover’s next stop is a part of the mountain called the “sulfate-bearing unit.” Sulfates, like gypsum and Epsom salts, usually form around water as it evaporates, and they are yet another clue to how the climate and prospects for life changed nearly 3 billion years ago. 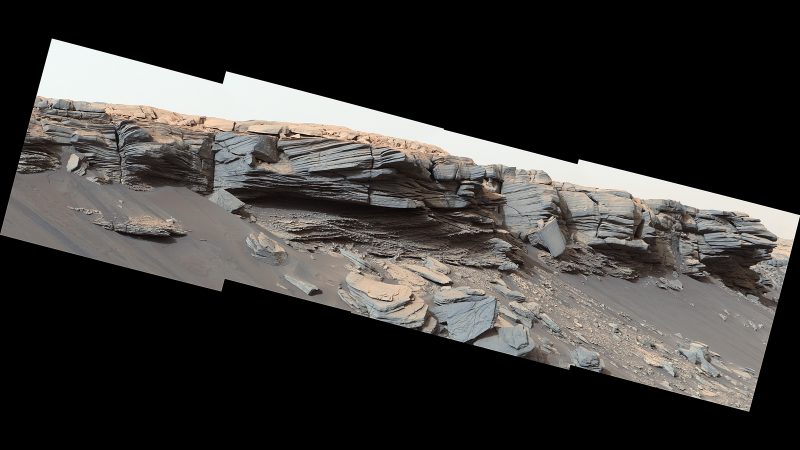 The goosebump-like textures in the center of this image were formed by water billions of years ago. NASA’s Curiosity Mars rover discovered them as it crested the slope of the Greenheugh Pediment on February 24, 2020 (the 2685th Martian day, or sol, of the mission). Image via NASA/ JPL-Caltech/ MSSS.

But between the rover and those sulfates lies a vast patch of sand that Curiosity must drive around to avoid getting stuck. Hence the mile-long road trip: Rover planners – who are commanding Curiosity from home rather than from their offices at NASA’s Jet Propulsion Laboratory (JPL) in Southern California – expect to reach the area in early fall, although the science team could decide to stop along the way to drill a sample or study any surprises they come across.

Depending on the landscape, Curiosity’s top speeds range between 82-328 feet (25-100 meters) per hour. Some of this summer road trip will be completed using the rover’s automated driving abilities, which enable Curiosity to find the safest paths forward on its own. Rover planners allow for this when they lack terrain imagery. (Planners hope for more autonomy in the future; in fact, you can help train an algorithm that identifies Martian drive paths.)

Matt Gildner is lead rover driver at JPL. He said:

Curiosity can’t drive entirely without humans in the loop. But it does have the ability to make simple decisions along the way to avoid large rocks or risky terrain. It stops if it doesn’t have enough information to complete a drive on its own.

In journeying to the “sulfate-bearing unit,” Curiosity leaves behind Mount Sharp’s “clay-bearing unit,” which the robotic scientist had been investigating on the lower side of the mountain since early 2019. Scientists are interested in the watery environment that formed this clay and whether it could have supported ancient microbes.

Extending across both the clay unit and the sulfate unit is a separate feature: the “Greenheugh Pediment,” a slope with a sandstone cap. It likely represents a major transition in the climate of Gale Crater. At some point, the lakes that filled the 96-mile-wide (154-kilometer-wide) crater disappeared, leaving behind sediments that eroded into the mountain we see today. The pediment formed later (though whether from wind or water erosion remains unknown); then windblown sand blanketed its surface, building into the sandstone cap.

The northern end of the pediment spans the clay region, and though the slope is steep, the rover’s team decided to ascend Greenheugh back in March for a preview of terrain they’ll see later in the mission. As Curiosity peeked over the top, scientists were surprised to find small bumps along the sandstone surface. 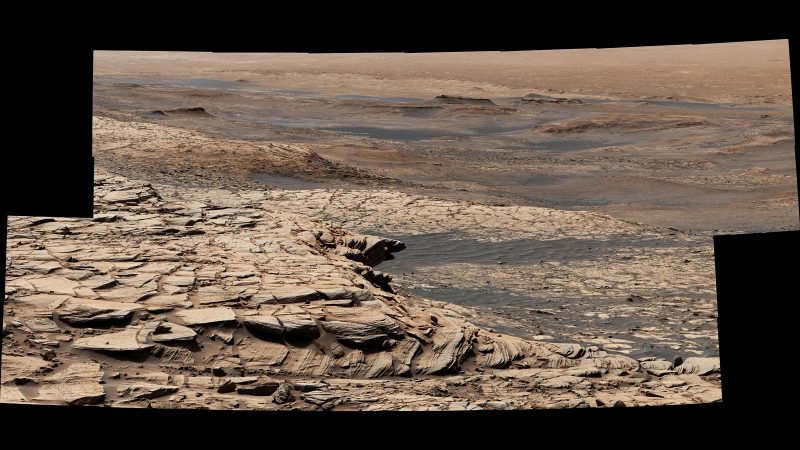 Stitched together from 28 images, NASA’s Curiosity Mars rover captured this view from “Greenheugh Pediment” on April 9, 2020, the 2,729th Martian day, or sol, of the mission. In the foreground is the pediment’s sandstone cap. At center is the “clay-bearing unit.” The floor of Gale Crater is in the distance. Image via NASA/ JPL-Caltech/ MSSS.

Alexander Bryk is a doctoral student at University of California, Berkeley who led the pediment detour. Bryk said:

Nodules like these require water in order to form. We found some in the windblown sandstone on top of the pediment and some just below the pediment. At some point after the pediment formed, water seems to have returned, altering the rock as it flowed through it.

These bumps may look familiar to Mars rover fans: One of Curiosity’s predecessors, the Opportunity rover, found similar geologic textures dubbed “blueberries” back in 2004. Nodules have become a familiar sight throughout Mount Sharp, though these newly discovered ones are different in composition from what Opportunity found. They suggest water was present in Gale long after the lakes disappeared and the mountain took its present shape. The discovery extends the period when the crater hosted conditions capable of supporting life, if it ever was present.

JPL’s Abigail Fraeman served as deputy project scientist for both missions. She said:

Curiosity was designed to go beyond Opportunity’s search for the history of water. We’re uncovering an ancient world that offered life a foothold for longer than we realized.

Bottom line: During summer 2020, the Mars Curiosity rover is making a mile-long (1.6 km long) journey around some deep sand so that it can explore higher up Mount Sharp.