Scientists see wispy swirls of bright soil on the moon. A computer simulation suggests the cause may be collisions by ancient comets. 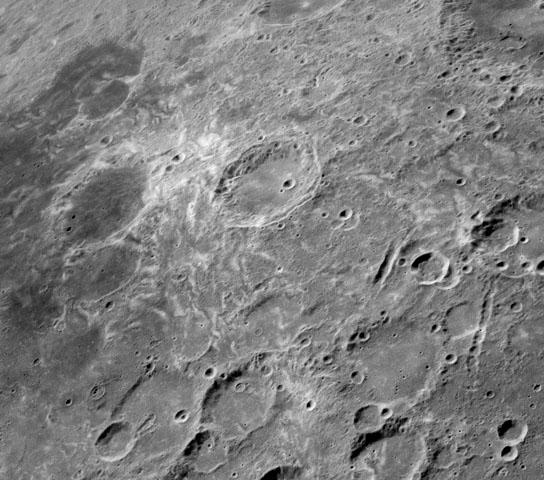 New research suggests that comet collisions could explain the formation of lunar swirls like these at Mare Marginis on the moon’s far side. Image via NASA/Lunar Reconnaissance Orbiter

Brown University researchers said today (June 2, 2015) that they have new evidence that several comet collisions over the last 100 million years created the wispy bright regions scattered across the moon’s surface. These enigmatic features are known to scientists as lunar swirls. The researchers used state-of-the-art computer models to simulate the dynamics of comet impacts on lunar soil and say this new work suggests comets can explain features of the mysterious swirls. They published their paper in the journal Icarus.

Lunar swirls have been a source of debate among astronomers for years. In some cases, the swirls stretch for thousands of miles across the moon’s surface. They’re characterized by a high albedo, or reflectivity, and by appearing like relatively young regolith, or lunar dirt. Their sinuous shape is often accentuated by regions of low reflectivity that wind between the bright swirls. Most are on the unseen far side of the moon, but one famous swirl called Reiner Gamma can be seen by telescopes on the moon’s near side.

Peter Schultz, a planetary geoscientist at Brown University, said Reiner Gamma was his favorite object to look at, back when he was an amateur astronomer. He co-wrote the paper on lunar swirls with his former graduate student, Megan Bruck Syal. He said:

They simply look as if someone had finger-painted the [moon’s] surface.

We think this makes a pretty strong case that the swirls represent remnants of cometary collisions.

Collisions by comets has been one possible explanation for the swirls, but a more commonly believed explanation was magnetic anomalies in the moon’s crustal magnetic field. In the 1970s, scientists discovered that many of the swirls are associated such anomalies. That revelation led scientists to conjecture that some rocks below the moon’s surface might contain remanent magnetism from early in the moon’s history. At that time, the moon’s magnetic field was much stronger than it is now. It had been proposed that those strong, locally trapped magnetic fields deflect the onslaught of the solar wind, which was thought to slowly darken the moon’s surface. The swirls might be places that remained brighter than the surrounding soil because of those magnetic shields. 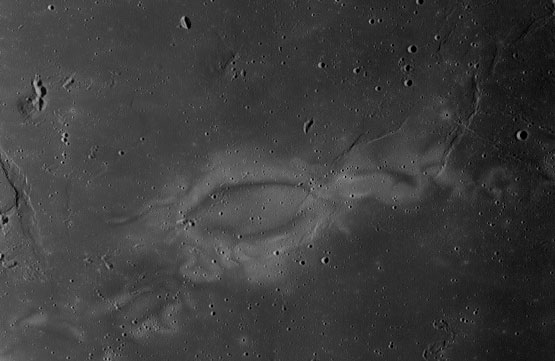 Areas scoured by a comet’s impact would appear brighter when the sun strikes at a certain angle. Reiner Gamma, on the moon’s near side, appears brightest in the crescent moon just before sunrise. Image via NASA/Lunar Reconnaissance Orbiter

But Schultz had a different idea for how the swirls form — one that has its roots in watching the lunar modules land on the moon during the Apollo program. He said:

You could see that the whole area around the lunar modules was smooth and bright because of the gas from the engines scoured the surface. That was part of what got me started thinking comet impacts could cause the swirls.

Comets in the inner solar system have their own gaseous atmosphere called a coma. Schultz thought that when small comets slam into the moon’s surface — as they occasionally do — the coma may scour away loose soil from the surface, not unlike the gas from the lunar modules. That scouring may produce the bright swirls.

Schultz first published a paper outlining the idea in the journal Nature in 1980. That paper focused on how the scouring of the delicate upper layer of lunar soils could produce brightness consistent with the swirls.

As computer simulations of impact dynamics have gotten better, Schultz and Bruck-Syal decided it might be time to take a second look at whether comet impacts could produce that kind of scouring. A statement from Brown University on June 2 said:

Their new simulations showed that the impact of a comet coma plus its icy core would indeed have the effect of blowing away the smallest grains that sit atop the lunar soil. The simulations showed that the scoured area would stretch for perhaps thousands of kilometers from the impact point, consistent with the swirling streaks that extend across the moon’s surface. Eddies and vortices created by the gaseous impact would explain the swirls’ twisty, sinuous appearance.

Comets carry with them a magnetic field created by streaming charged particles that interact with the solar wind. As the gas collides with the lunar surface, the cometary magnetic field becomes amplified and recorded in the small particles when they cool.

He said he and his team feel that, taken together, their results offer a more complete picture of how the swirls form, adding:

This is the first time anyone has looked at this using modern computational techniques. Everything we see in simulations of comet impacts is consistent with the swirls as we see them on the moon. We think this process provides a consistent explanation, but may need new moon missions to finally resolve the debate.

Bottom line: Wispy swirls of bright soil on the moon were thought to be caused by magnetic anomalies in the moon’s crustal magnetic field. But a new computer simulation by Brown University researchers suggests the cause may be collisions by comets over the last 100 million years.