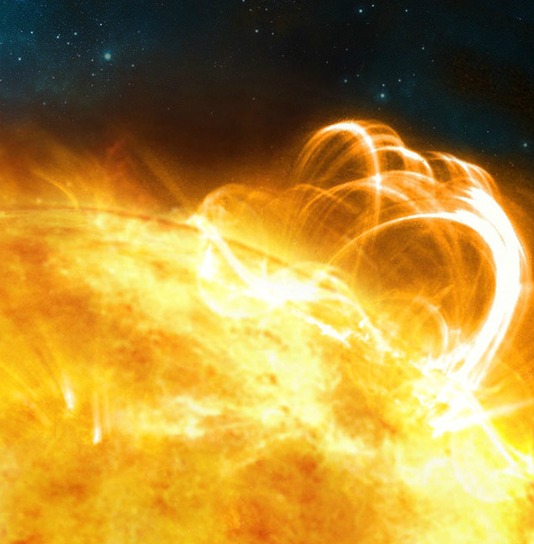 What the sun might look like if it were to produce a superflare. A large flaring coronal loop structure is shown towering over a solar active region. Image credit: University of Warwick

Our sun demonstrates the potential to superflare, says new research. If it did, a superflare could jeapordize Earth’s communications and energy systems. Astronomers observe superflares on other stars. They are are enormous flares, thousands of times more powerful than ever recorded on our sun. A typical flare from our sun might have an energy equivalent to a 100 million megaton bombs. A superflare on the sun could release energy equivalent to a 100 billion megaton bombs and could cause large-scale power blackouts here on Earth.

Now researchers have confirmed that the sun could produce such a powerful flare. They did it by using NASA’s Kepler Space Telescope to observe a superflare on a binary star in the Milky Way – called KIC9655129- with wave patterns similar to those that have been observed in flares from our sun.

According to a study published in October 23, 2015, in Astrophysical Journal Letters, the similarities between the superflare on KIC9655129 and our sun’s solar flares suggest that the underlying physics of the flares might be the same.

This new work supports the idea that our sun could also produce a superflare. 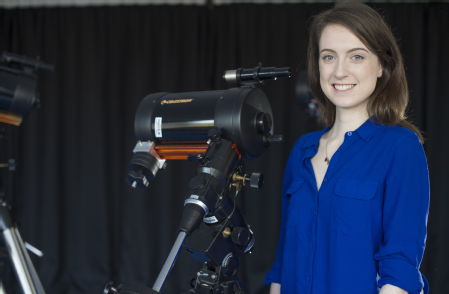 Chloë Pugh from the University of Warwick’s Centre for Fusion, Space and Astrophysics, is the study’s lead researcher. She said:

If the sun were to produce a superflare it would be disastrous for life on Earth; our GPS and radio communication systems could be severely disrupted and there could be large-scale power blackouts as a result of strong electrical currents being induced in power grids.

But, she said, it’s not likely that our sun will superflare, saying:

Fortunately the conditions needed for a superflare are extremely unlikely to occur on the sun, based on previous observations of solar activity.

So the sun could flare in such a powerful way as the flare observed on KIC9655129, but it probably won’t.

The researchers used what’s called time series analysis to reach this conclusion. They detected wave patterns in the light curve of a flare emanating from KIC9655129, using data collected by the Kepler Space Telescope.

NASA’s Solar Dynamics Observatory (SDO) has had virtually unbroken coverage of the sun since the spring of 2010. The video below shows three years of the sun at a pace of two images per day.

Bottom line: Researchers using NASA’s Kepler Space Telescope have found a stellar superflare on a binary star in the Milky Way – called KIC9655129- with wave patterns similar to those that have been observed in solar flares. A study published October 23 suggests that the underlying physics of the flares might be the same, supporting the idea that our sun could also produce a superflare.