Cosmology – the science of the origin and development of the universe – has made progress in recent years. But many questions remain unanswered. 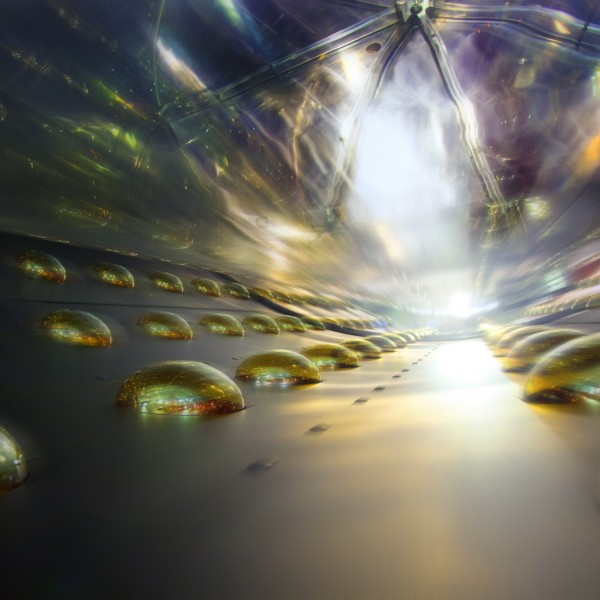 Daya Bay Neutrino Experiment, a joint venture between China and USA (photo of the documentation of the construction). This experiment is designed to detect sterile neutrinos. Image via Roy Kaltschmidt of Lawrence Berkeley National Laboratory.

What are the mysterious dark matter and dark energy that seem to account for so much of our universe? Why is the universe expanding? For the past 30 years, most cosmologists have looked to a theory from particle physics called the Standard Model for answers to these questions. They’ve had good success in matching observational data to this theory. But not everything fits the predictions, and cosmologists wonder why the discrepancies exist. Are they interpreting the observations wrong? Or is a more fundamental rethink required? This week (July 7, 2015), at a special session at the National Astronomy Meeting (NAM) 2015 in Wales, cosmologists met to take stock of the evidence and stimulate further investigation of cosmology beyond the Standard Model.

Dark matter is thought to make up about one-quarter of the mass of our universe, and yet no one knows what it is. The most popular dark matter candidate is Cold Dark Matter (CDM). CDM particles are thought to move slowly compared to the speed of light and interact very weakly with electromagnetic radiation.

But no one has managed to detect Cold Dark Matter to date. This week at NAM 2015, Sownak Bose from Durham University’s Institute for Computational Cosmology (ICC) presented new predictions for a different candidate for dark matter, the sterile neutrino, which may have been detected recently. He said in a July 6 statement from the Royal Astronomical Society:

The neutrinos are sterile in that they interact even more weakly than ordinary neutrinos; their predominant interaction is via gravity.

The key difference with CDM is that just after the Big Bang, sterile neutrinos would have had comparatively larger velocities than CDM and would thus have been able to move in random directions away from where they were born. Structures in the sterile neutrino model are smeared out, compared to CDM, and the abundance of structures on small scales is reduced.

By modeling how the universe has evolved from that starting point and looking at the distribution of present-day structures, such as dwarf-mass galaxies, we can test which model — sterile neutrinos or CDM — fits best with observations.

The energy of the line fits with predictions for the energies at which sterile neutrinos would decay over the lifetime of the universe. Bose and colleagues … are using sophisticated models of galaxy formation to investigate whether sterile neutrino corresponding to such a signal could help zero-in on the true identity of dark matter.

Not everyone believes that extra mass from dark matter is needed to explain observations. Indranil Banik and colleagues at the University of St Andrews said at the special session that they believe that a modified theory of gravity may be the answer. Banik said:

On large scales, our universe is expanding – galaxies further away are going away from us faster.

But on local scales, the picture is more confusing. We found that running our model in the context of Newtonian gravity did not match the observations very well. Some local group galaxies are travelling outwards so fast that it’s as if the Milky Way and Andromeda are exerting no gravitational pull at all!

The St Andrews group suggests that these fast-moving outliers could be explained by a gravitational boost from a close encounter between the Milky Way and Andromeda about 9 billion years ago. The very fast motions of the two galaxies as they flew past each other, at around 370 miles per second (600 km per sec), would have caused gravitational slingshot effects on other galaxies in our Local Group of galaxies.

This week, at the special session on cosmology at NAM 2015, the amount of dark energy in the universe was also considered as a matter of debate. The first evidence for dark energy – an energy field causing the expansion of the universe to accelerate – came through measurements of Type Ia supernovae, which are used by astronomers as standard candles to determine distances.

However, there is now increasing evidence that Type Ia supernovae are not standard candles and that the precise brightness reached by these exploding white dwarf stars depends on the environment in the host galaxy.

Cosmologist Peter Coles of the University of Sussex – who convened the special session on cosmology this week – commented:

Although cosmology has made great progress in recent years, many questions remain unanswered and indeed many questions unasked. This meeting is a timely opportunity to look at some of the gaps in our current understanding and some of the ideas that are being put forward for how those gaps might be filled.

Overall, dark energy is thought to contribute most of the mass and energy in the universe. About a quarter is dark matter, which leaves only a few percent of the universe composed of regular matter, such as stars, planets and people. Pie chart via NASA

Bottom line: Cosmology has made progress in recent years, but many questions remain unanswered. This week at NAM 2015 in Wales, cosmologists met in a special session to discuss some of the biggest questions of modern-day theories of the universe.